Tomato prices holding up well in market under pressure

The tomato market usually dips in November in various countries, and, although prices have been higher than average for some time, that dip came this year, too. However, November still deviated from 'normal', in most cases because of higher prices than in recent years, except for in Spain. That can be concluded from the latest update of the European Commission's tomato dashboard and figures from Belgium.

Across the board, the tomato price in Europe averaged €1.37/kg. That is less than in October and also less than in last November when the average price was €1.43. However, it is still higher than the five-year average; prices have been above this range since March. The reasons for that are well-known: the Tomato brown rugose fruit virus (ToBRFV), Covid-19, and now the energy crisis and ever-increasing prices for almost everything.

New influencing factor: energy prices
The usual market progression has been anything but usual. When taking into account how the market usually progresses, it is possible that there will be another price increase in December. However, it should be noted that this was not the case last year, although high energy prices were not an issue for growers then as they are now. The global pandemic was a factor in both years, which could affect demand.

Growers rely on lighting and heating in winter. For some, this winter is an entirely different story: greenhouses lie empty, or growers do cultivate, but without putting much energy into it. In other words, the lights stay off, and the heating is turned down, resulting in lower production. It should be remembered, too, that costs are rising everywhere, including for imported products. Filling up a truck with gas, packaging products - everything is becoming more expensive.

The Netherlands: tiny dip
It seems the high energy costs will be reflected in Dutch and Belgian figures especially due to fewer products on the market. The tomato dashboard shows the average Dutch tomato per kg price is €1.20, just slightly less than in October, but still, a record price compared to the past five years.

Belgium: less supply
Figures from Belgium are not included in the tomato dashboard, but you can see the country's Horticultural Cooperatives Federation's (VBT) figures via the Flemish Agriculture and Fisheries Department. 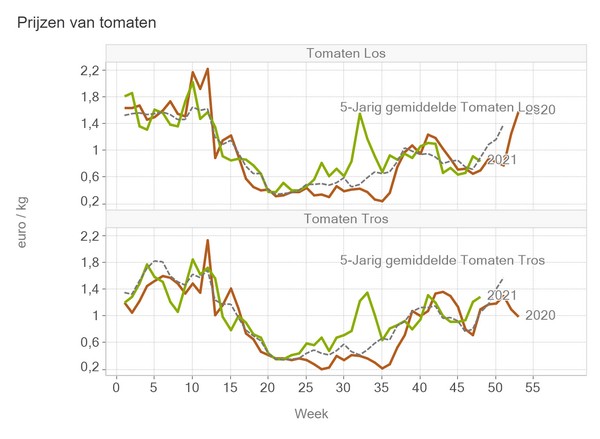 These figures show average prices, in particular for TOVs, since mid-November are higher than last year and the last five years. For loose tomatoes, it is slightly different; they show a similar summer price peak as vine tomatoes. Then, the 'winter prices' arose, but after that, prices remained reasonably in line with last year and the past five years.

Supplied volumes of both loose tomatoes and vine tomatoes have been lower than in 2020 for weeks. In week 43, there were more TOVs than in 2020, but since then, supply has been lower each week, as was the case in most weeks before week 43. 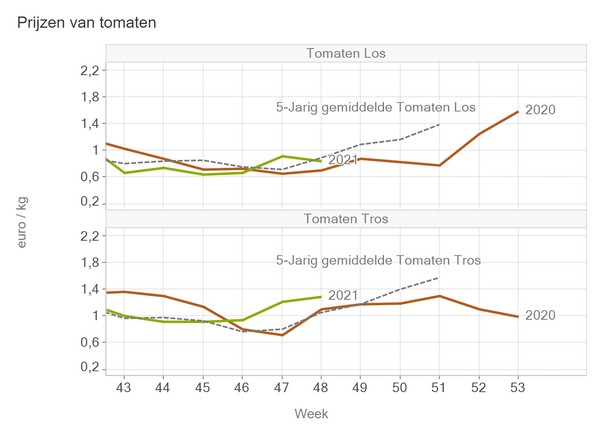 Spain: deep dip, more Moroccan products
Spain had the largest 'November price dip'. At an average of €0.99, the price is just above the five-year minimum and that of November last year. The latter is notable because Spanish acreage declines annually. According to the Spaniards, significant Moroccan competition is a reason for that: Morocco is increasingly sending tomatoes to Europe.

Recently, other European figures seem to contradict this. We have, however, learned that these figures are incorrect. Normally, the figures are based on three sources, but, recently, only one source remained, making those figures unreliable. Instead of less supply from Morocco - as originally described in the other figures - that country sent 18% more produce to Europe in October 2021 than in 2020.

Italy: small price hike, big concerns
Italy is the only country on the EC dashboard that did not experience the usual November dip. There, the average price rose slightly, which is even more strange when taking into account that this increase is actually less than last year and the last five years.

Italy had a tough summer: temperatures were high and the ToBRFV plagued growers. As in other countries, some of the Italian growers are choosing to cultivate different crops.

France; more 'normal' November
In France, November prices were closer to those in 2020 and the five-year average. France produces relatively few tomatoes, instead importing much.

Click here to enlarge all the European tomato dashboard graphs.