"Food production is at the heart of climate dilemmas"

Working on the project, his role will involve assessing the benefits of ‘natural light growing’ alongside the use of bespoke biostimulant formulations, to help optimize the nutrition, flavor, and sustainability credentials of fresh produce. The project also aims to challenge the conceptions of UK food production limitations and capabilities. 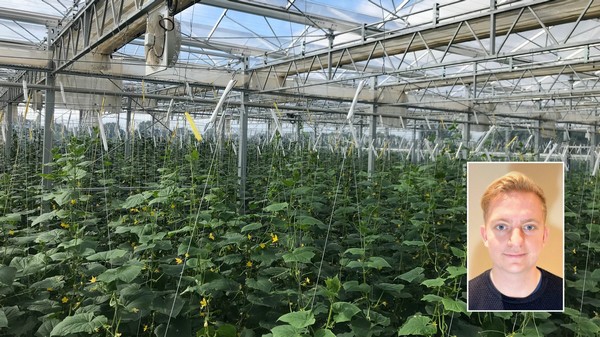 Oliver graduated from Keele University where he studied Biology and Education. After taking on a role in housing fraud, he then completed a masters in Sustainable Crop Production: Agronomy for the 21st Century, at Warwick University. He said: “For my masters, I wanted to go back to my roots and restart my intended career in botany, with a focus on food production and how we will counter the catastrophic effects that climate challenge will bring to the realm of food production.

“Having grown up in Australia, I saw first-hand how drought can decimate land to a degree that life cannot be sustained in the long term. As such, I want to find a way we can survive the coming challenges climate change will cause. I believe food production is at the heart of this dilemma and see the potential of natural light growing in being part of the solution.”

The RIPEHouse project aims to develop and validate a system to enable two cycles of production per year for crops such as baby cucumbers. While doing so, it will demonstrate carbon-efficient conditions through trials, benchmarked against conventional glasshouse production. Finally, the project will investigate market-disruptive business models such as local food hubs and meal boxes, to respond to consumer demand for healthier diets and British-grown produce.

Oliver added: “I see this project as a positive step towards challenging the understanding of how we grow and produce crops. It has the potential to show us how we may be able to grow crops that historically are not grown in the UK.