According to OPMA’s website, the award is given to an individual that has demonstrated over many years untiring efforts to improve the quality and distribution of fruits and vegetables marketed within or outside the province of Ontario through innovation, cooperation and hard work. 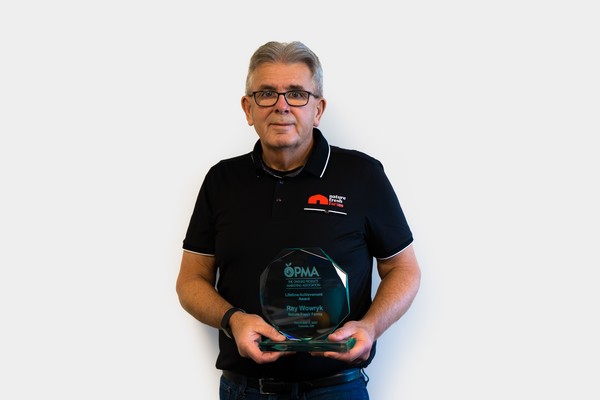 The OPMA awarded Ray Wowryk with this year's OPMA Lifetime Achievement Award at its virtual Gala on December 2nd.

“It's an honor to present this well-deserved Lifetime Achievement award to Ray. He has dedicated his life to the produce industry and although it is a small token of appreciation, it is meaningful to him,” said sales director Matt Quiring. “When Ray joined us at Nature Fresh Farms about 10 years ago, we didn’t think he would want to stay so involved on a day-to-day basis. But I know now he will continue to be involved as long as he is – in his words – continuing to have fun. A big congratulations to my friend and mentor Ray!”

Wowryk is recognized as a leader and mentor not only within Nature Fresh Farms but across the produce industry. Having been a part of the industry over the past 45 years, Ray has worked in every level of produce from warehouse-labor to sales and procurement, to fresh imports and exports. Committing countless volunteer hours and being a prominent member of various organizations demonstrates that produce is not a career for him but a passion that extends outside of his profession.

“I have been fortunate to have enjoyed such a long career within an industry that has provided me several opportunities. I would like to thank the OPMA management and directors for this recognition. I feel honored to join past recipients who have contributed a great deal to promote the Ontario fresh produce industry,” said Wowryk. “I also want to thank Peter Quiring who gave me the opportunity join the Nature Fresh Farms team to help expand production and promote the consumption of greenhouse grown vegetables. Thank you to my team for the nomination.”

Every year, four awards are presented at the OPMA Gala Dinner and Awards Ceremony. However, this year the awards were again announced virtually during OPMA’s virtual Gala on December 2nd.