"Depending on their gas contracts, lettuce growers might leave their greenhouse empty for a while"

Now that it is winter, Dutch growers are cultivating lettuce, warm and dry, in greenhouses. At least, if they dare even to do so. The recent high prices for gas and electricity may cause some of them to skip this winter. We approached several European cooperatives with that question. We also asked when things would begin getting exciting.

It soon became apparent, in early November, that it was still hard to predict what would happen later in the year, especially in winter. "I can proffer all kinds of theories, but it varies from grower to grower. So, I currently have little idea," says Benny Cuypers, divisional head of leafy crops and field vegetables at the BelOrta cooperative in Belgium. He can imagine some growers will decide to put less energy into their cultivation this winter. If that is the case, production may quite possibly be slower, especially in the darkest, coldest time of the year.

Spreading costs
René Simons chairs Veiling Zaltbommel in the Netherlands. The energy crisis began in early October. He then already expressed an expectation; lettuce is often a shorter-lived crop, so it may be more sensitive to the impact of high costs. "That's unlike greenhouse vegetables like tomatoes. They grow those year-round and can spread the heating costs over a longer time." 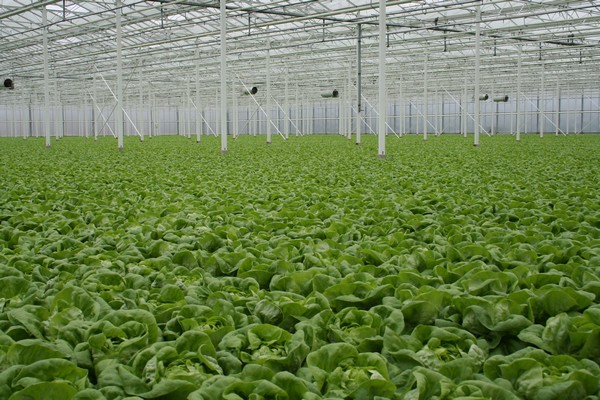 Greenhouse of a lettuce grower for REO Veiling

"That's different for some lettuce growers. Some of the growers who supply us grow beans or cucumbers in the summer, and then lettuce or endive in the winter. It could be less risky for them to leave their greenhouse empty, rather than growing at potentially very high costs. Especially if they haven't set their gas prices; your selling price doesn't reflect those high costs."

René is a soft fruit grower himself. He has ordered an inventory be taken to determine how this impact on supply might affect the auction. "There shouldn't be any major problems with strawberries. Most of those growers have fixed gas prices. With their cogeneration, they can then also generate power for their lights." There is a chance, however, that more of that product will move to the spring. There might also be larger peaks in the supply then, thinks René, because those products will coincide with tunnel cultivation.

Accordion effect
Rik Decadt, Director of Production at REO Veiling in Belgium, takes the 'accordion effect' into account. Several plantings could converge in the spring. "When winter is coldest and darkest, lettuce grows relatively slowly. Then there's little difference between plantings in late January or a little later into February. More product may suddenly arrive all at once in early April if growers abandon their usual schedules." That applies to not only lettuce but possibly other products as well. "For example, growers who alternate cucumber with lettuce in the winter; if they decide not to grow lettuce this winter and then start cucumber later, there will be fewer cucumbers in early spring."

Leafy greens, including greenhouse lettuce, are a relatively minor product at Veiling Zaltbommel. That makes the auction situation slightly different compared to the larger strawberry product group, says René. "We have fewer agreements for leafy crops. We don't have to, say, deliver lettuce every week, so, we have more room to maneuver. However, every year, in the winter, we have loyal customers who buy lettuce from us." 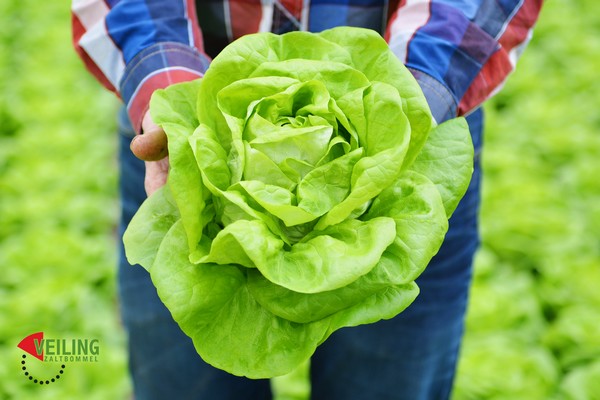 "Of course, we want to supply them with beautiful products from our growers." December, January, and February will be exciting in that respect, thinks René. "We may have to consider how we're going to fill in and solve that. You want to be able to serve your clients, after all." René sees that the fall endive, which requires little gas, is 'just getting on with it'. "Our growers who plant just after New Year's aren't going to change their schedules. They're confidently looking forward to spring."

The advantage of a greenhouse
Serving customers well is, naturally, what they want to do at BelOrta, adds Benny, and preferably at 'nice prices' for both growers and buyers. Whether these will materialize, however, depends by no means just on how the cultivation goes in Belgium. "The supply from southern Europe also considerably affects the market. For example, Italy has a lot of products and can sell a lot to Germany. That could affect prices and be detrimental to our growers."

Rik also mentions Italy as a major competitor. "They grow a lot of lettuce around Naples, often in unheated greenhouses, so the energy issue doesn't play as much of a role there. I don't know the exact current weather situation there, but I do know they haven't expanded their acreage. More and more growers there cultivate baby-leafs that are harvested mechanically. We, however, specialize in large lettuce heads."

Large supplies from Italy and other southern European countries can affect the Belgian market. Less supply due to unfavorable weather conditions in other areas can, conversely, create opportunities. Such bad weather occurs almost every year. Recently, there was severe weather in October in certain growing regions in Italy, and this summer, there were floods in Germany.

That destroyed much of the open-field lettuce, and thus pushed up the prices considerably. Also, last year, there was heavy snowfall in countries like Spain. "Then greenhouse lettuce growers in Belgium have an advantage. Though, of course, it's hard to anticipate that in advance," Benny points out. "You have to plant if you want to deliver when needed."

Supply on level
Rik does not foresee much movement at REO Veiling until Christmas. After that, however, some greenhouses will probably stay empty for a while. "Whether growers choose to do so depends greatly on their gas contracts. If they have a favorable contract, they'll be more inclined to continue growing this winter. Less so if they have to heat their greenhouses at relatively high prices." Some growers cultivate on water in greenhouses too.

Rik estimates that it will be far tougher for them to temporarily stop cultivating this winter because the investment costs in water cultivation are considerably higher, and a grower best covers those costs by farming. "Some of these growers now have cogeneration units, so they generate power for lighting, which helps. Other growers will be making all kinds of adjustments to their lighting schedules to keep costs down." 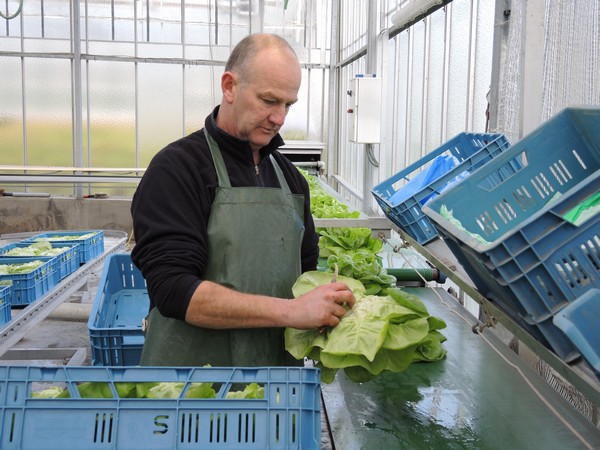 One of the lettuce growers for REO

As René explains, it is challenging for the cooperatives to keep their supplies on level, through thick and thin. At REO, the greenhouse lettuce acreage has stagnated in recent years after a steady decline. Now that energy prices have risen sharply, he fears that some of that acreage may be lost.

"Not immediately; I expect us to sell as many heads as we did last year, but we might have fewer to sell next year." Some growers, who can deliver lettuce in time even when there are setbacks in cultivation elsewhere, have the best chances of benefiting from potentially rising prices.

In this regard, at BelOrta, it does not matter whether a grower sells on the day market or through pre-sales. "We offer both or a combination of both. Auction prices always lead, so greenhouse lettuce growers can always get that higher price when the market is tight," Benny concludes. Whether that will actually happen depends on many factors, as well as each grower's individual choices, that much is clear.