A global virus outbreak brings a lot of stress and confusion with it. No, we are not talking about Covid-19 this time, but about another virus, feared amongst growers: Tomato brown rugose fruit virus (ToBRFV). Although it is fair to say that the virus brought an array of chaos with it, the UK was able to handle the outbreak with a remarkable amount of calm and control. Adrian Fox with Fera Science Ltd and member of the UK ToBRFV Steering Group tells us all about it in this article. 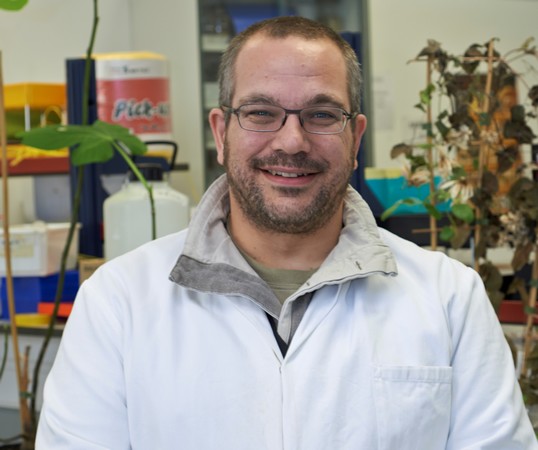 “The Steering Group consists of the AHDB and TGA technical leads, growers, and science representatives – such as me, but also scientists from companies who speak with growers on a more regular basis – so we could focus on both the industry and the governmental side of things. We also brought in inspectors and government people; everybody who had an influence over or interest in or could be affected by the virus was there.”

Adrian explains that, because there were so many different parties, it was much easier to determine where the gaps in knowledge needed to combat the virus were, and thus to close these gaps through publicly funded research. Often, he says, grower-focused research in the EU is funded commercially, and the companies who fund the research keep those results for themselves; nobody can see the bigger picture. However, because the research was not conducted this way, everybody could benefit. “From my point of view, the way we handled things in the UK should become the blueprint on how to deal with virus outbreaks that involve multiple sectors in general.”

Key pieces of research
Just before the Covid pandemic hit the UK in late 2019, Dave Kaye, a steering group member working with ADAS, was commissioned by the ToBRFV Working group to embark on a  fact-finding mission, traveling to the Netherlands, Germany, and Israel to find out how serious the problem was and to provide the group with a report to base its management response to the virus on. Two areas that needed research, Kaye found, were disinfection and detection: how robust is the virus, and how soon, and most efficiently, can it be detected?

“In the research we carried out in response to these questions, we’ve shown that it takes 5 minutes of being exposed to at least 90 C to kill the virus. Furthermore, hand washing is more about the active movement of the water than about chemical soap. This is a key piece of information, but growers won’t be able to ensure their staff washes their hands for several minutes all the time; it is impractical, so better advice was for staff to wear gloves.” 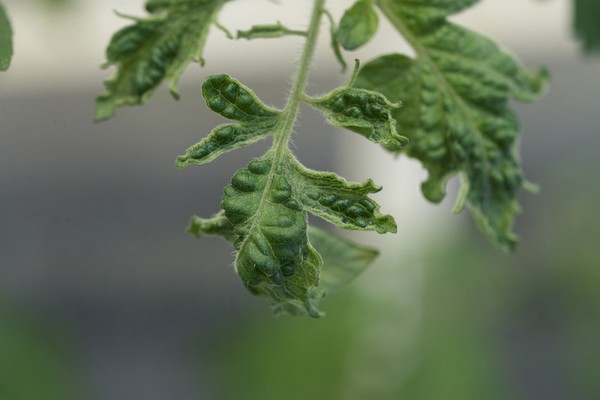 A deformed leaf with ToBRFV from the inoculation trials

‘When looking at detection, there are standard methods to use, but then the question of how to sample in a glasshouse arises, as there is a limit to how many plants you can test and to how efficient the method is. Interestingly, in 1934, research was carried out on how to detect the Tobacco mosaic virus on and in plants, which gave us a rough indication of how the virus would behave in young and in more mature plants.

"In our research, it appeared that young, infected plants show a reliable pattern of infection: after 2-3 weeks, the infection can be detected in the top of the plants, 2 weeks later in the middle, and again 2 weeks later in the bottom of the plant. Based on this research, our obvious advice to growers was to sample the growing tips. More mature plants seemed less susceptible to the multiplication of the virus when infected as not all plants were detectably infected and there was no clear chronology pattern of infection. It also took the virus a lot longer to spread throughout the entire plant. After 6-7 weeks, we started to see the infection in the top, and later in the middle, but it was quite erratic. Because of those issues, we had a discussion whether to focus on the calyx (sepals), but we are still finishing this research.”

Non-invasive testing
The third piece of research on non-invasive testing is still being carried out, funded by the UK government and AHDB. Rather than taking 200 leaves, there should be easier ways to take samples. “In a greenhouse, there are certain natural points that everybody touches, such as door handles or taps. If there is a virus, you should be able to detect it there. In Covid-terminology: can we develop a self-test for growers? A benefit for growers is that it allows for the earliest detection possible without having to rely on laboratories.”

Benefits of the steering group
The collaboration platform that the steering group offered has given a framework and relevant tools to combat viruses in general, Adrian feels. “It has rendered us a mechanism where industry and government are happy to sit down together to ensure the best outcomes, leading to efficient decision making. Every 5-7 years, another contact transmittable pathogen pops up, so developing a standardized approach is essential.”

For now, the situation in the UK is relatively under control, and that, Adrian emphasizes, is thanks to the Working Group. “The people in this group have worked so hard to pull together everyone who is interested in and affected by ToBRFV, but that is often overlooked. We got where we are now because of the work of the Working Group." It has also helped to quickly disseminate information, as the group was able to quickly share advice with the industry. The AHDB Knowledge library puts all the knowledge together, and it has been the most viewed part of their website. It has helped to grow a general understanding of how you must take multiple precautionary measures for prevention. "The virus management measures are strict. You can, of course, still get caught, but the more measures we have and continue to develop, the smaller the damage.”