Project VG15021 was undertaken to determine whether a new plant growth regulator (PGR) could benefit the Australian vegetable industry in overcoming plant stress. The PGR that the project focused on was karrikinolide (KAR1), which was patented in 2005 but has not yet been made commercially available. The project was able to validate the crops that are responsive to KAR1 and to determine the optimal dose to improve crop performance in stressful environments. It also resulted in the successful development of a prototype technology that can effectively deliver KAR1 and other commercial PGRs to plants.

The first step in the project was extensive interviews with growers, conducted face-to-face across southeast Queensland and New South Wales. “We used these interviews to determine the key pain points for growers, so we could target our research to address their most pressing needs,” lead researcher Dr. Jitka Kochanek said. “What we heard was that plant stress in the first two to four weeks of growth was a real killer for the industry, particularly heat waves at transplant. Other areas of concern were bolting in crops such as broccoli and disease in Solanaceae crops; therefore, we focused our research in these key areas.”

Responsive vegetables
“Surprisingly, we found that over 90 percent of levied vegetable lines tested were responsive to KAR1, including lettuce, carrot, capsicum, pumpkin, broccoli, cauliflower, sweet corn, and baby spinach. We then grew plants on commercial farms and in glasshouses to validate these findings. We found that our screening technique predicted the active dose of KAR1 very effectively. This was a real win,” Dr. Kochanek said. 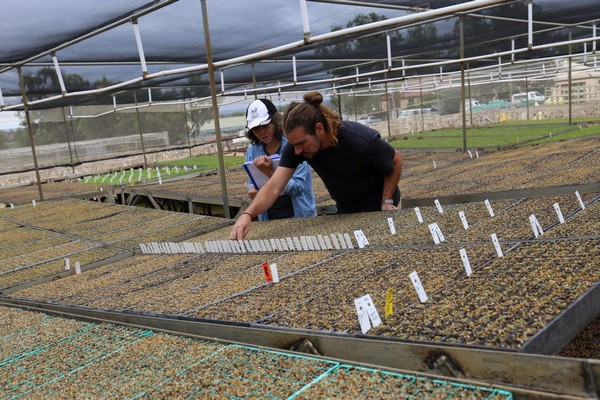 In earlier projects, Dr. Kochanek’s team had developed a laboratory screening technique that could rapidly determine the effectiveness of plant growth regulators and other chemistries on plants. They used this technique to find the vegetable crops that were responsive to KAR1.

The testing found that KAR1 was a crop multi-protectant, which enabled crops to maintain normal growth under suboptimal conditions that harmed untreated crops. Effects included delayed bolting and improved yield quality for broccoli and, in capsicum, stronger plants with better structure and faster fruit formation. However, the effects of KAR1 were highly dosage-specific, and even varieties within the same crop could vary in their optimal dose. “If the dose was wrong, KAR1 simply did not work,” Dr. Kochanek explained.

“We also determined that the best way to apply KAR1 was via seeds; root drenches were too expensive and less effective than seed applications, and shoot sprays did not work. Also, the compound was exceptionally expensive at $20,000 per gram, and it rapidly degraded in sunlight, making it cost-prohibitive to apply via the conventional protocol.

“We then used some very clever bioengineering to develop a prototype to deliver KAR1 to plants effectively and at the correct dose. In 2019-2020, we validated our prototype in commercial production systems for lettuce variety (var.) Blackbelt, broccoli var. Aurora, capsicum var. Katana, and tomato var. Rebel.”

Surprises
The prototype proved to be highly effective at delivering both KAR1 and a commercially available PGR. “Just how effectively the prototype worked was very surprising,” Dr. Kochanek said.

“Every experiment we conducted with the prototype worked. We demonstrated that the prototype delivered such compounds 100 to 1,000 times more effectively than currently used technologies. This promises real cost savings on-farm. The prototype was designed to be fully automated and rapidly upscaled, which will result in further savings in labor costs.”

Dr. Kochanek said there is huge scope for developing the prototype and PGR compounds for the industry – for disease suppression, to improve crop tolerance to environmental stresses, and to control growth in real-time.

“We are keen to understand what industry sees as the main problems to solve and to work with them into the future to use these new technologies to solve those issues,” she added.

Background
Karrikinolide was discovered by Dr. Gavin Flematti at the University of Western Australia in 2004, who synthesized and patented the PGR in 2005. The compound was not made commercially available because it proved very difficult to apply to plants. It degrades in sunlight and crops require a very specific dose for it to be effective.

When the research team discovered this, project VG15021 became focused on developing a technology that would effectively deliver KAR1 to plants, at the correct dosage, and in a cost-effective manner.