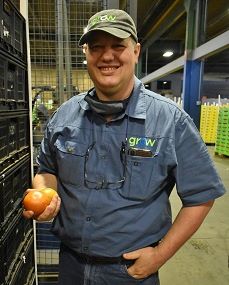 “The Johannesburg market has had between 900 and 1,500 pallets of tomatoes for a considerable period now, and when our volumes go past a thousand pallets, it puts pressure on the tomato price,” says Jan Potgieter (right), tomato agent at GROW Botha & Roodt at the City Deep municipal market.

The oversupply of the past month could be seen in smaller national markets also filling up with tomatoes, but, Potgieter says, it is not the largest oversupply they have seen.

Prices have fallen by 42% over the past week, according to AMTrends, to R4.47 (€0.25) per kilogram, and consumer demand is not what it should be. There are more and more consumers who prefer buying loose tomatoes, rather than the carton they would have taken two or three years ago.

These prices are for boxes of 6 kilograms, preferred by inland buyers. In Cape Town, boxes of both 5 and 6 kilograms are preferred. The price per kilo is the same across the country.

Pallets of tomatoes on the Johannesburg market floor; 156 cartons of 6kg of tomatoes fit on a pallet

Brits tomatoes looking good
At the moment, plenty of tomatoes are coming in from Brits, close to Gauteng, and the fruit is looking very good. There has been hail, but the impact is localised.

Pest control burns through a pocket
Tomatoes do not like wet foliage or wet feet. Under constantly overcast, moist conditions, pests like the now omnipresent Tuta absoluta (which has grown from being absent in South Africa to becoming arguably the major tomato pest in a few years) or rust spores explode in numbers.

Keeping these pests under control is costing tomato farmers a sizeable amount of money: it requires daily spraying - especially if rain washes off previous applications. That is, if soil conditions allow sprayers to move through tomato blocks.

“A producer tells me he can work out exactly what it’s going to cost him to plant tomatoes this season, but of the potential returns, he has no idea. There’s just no guarantee on the other side of the equation. The tomato season is wholly dependent on market conditions, socio-economic and labour conditions, and, of course, the weather.”

People too poor to eat what they should be eating
“South African tomato farmers are top class, but unfortunately, consumer demand doesn’t always allow a price level that would adequately reward the farmer for the produce, at a price that would render it profitable to handle the kinds of volumes they handle.”

He is convinced, he says, that South Africa produces enough food for its entire population, but an enormous segment of the population is unemployed and does not have the money to buy “what they should be eating. If they had a bit more money in their pocket, imagine the pull we’d see for tomatoes. We’d be in a much better position and we'd obtain a good average price that's sustainable for both producers and for consumers.”

Official unemployment in South Africa rose to 34.4% this year.

South African farmers weather the storms on their own
“It’s not easy to farm tomatoes, and that concerns me,” he notes. There are farmers who lost much of their crop last year, and this year, they are again seeing pest numbers building and the rainclouds gathering.

"Just this morning, a Limpopo grower told me Tuta is devouring his tomato crop in front of his eyes," he shares. Some producers are thinking of giving up tomato production, at least for the foreseeable future or until more effective Tuta absoluta sprays make it to market.

Absorbing the costs to control a pest that was not even around six years ago, on top of rising costs on all other fronts, can become insurmountable for smaller producers especially.

“Despite all of the challenges, though, I remain positive about our tomato industry because of the high quality of tomato producers in South Africa. That's what is admirable about them: they wipe off their tears and get up again. They're 100% on their own, without state subsidies to help them in case of extreme weather."