"Healthy interest in sustainable packaging, even among discounters"

The topic of sustainable packaging in the fruit and vegetable trade seems to be experiencing a renaissance after the months-long impasse during the lockdown. Due to the approaching plastic ban within French food retail from 2022 onwards and similar negotiations going on in several other European countries, the market for solutions made from cardboard, paper, and cellulose has opened up again. We spoke with Adam Sikorski, sales manager of Polish packaging company Sofrupak, at expoSE in Karlsruhe, about his company's latest product line additions and longer-term development.

At expoSE alone, Polish company Sofrupak has already won three awards for its pioneering work in sustainable packaging. In 2017, Sofrupak even picked up the Innovation Award at the Karlsruhe Berry and Asparagus Fair, followed by the bronze medal at Fruit Logistica last year. In the run-up to the new asparagus and berry season, Sofrupak has again expanded its packaging range. "What's new is our so-called asparagus pack, a cardboard tray with cellulose coating. We are also launching a new berry tray, which can be stacked even if already filled, and thus has an interesting added value both in direct marketing and in food retail," Sikorski says. 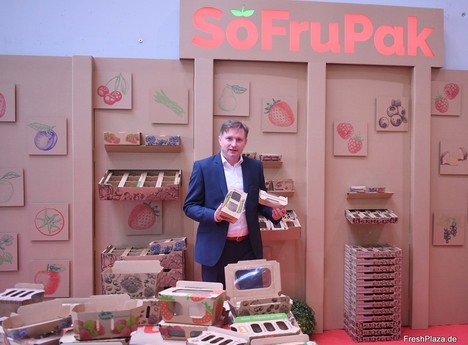 Adam Sikorski at this year's expoSE in Karlsruhe.

"Without exception, our packaging solutions are 100% biodegradable within 24 weeks. This means there is no waste, no disposal costs, and - last but not least - no environmental impact or pollution," he continues.

Turnaround in the fruit and vegetable trade
The company's packaging innovations have now been on sale for 5 years and are already being used in many European countries. Sikorski: "We are now establishing our solutions in Chile as well. Nevertheless, Germany and France are our main target markets at the moment." The latter country recently announced a plastic ban within food retail, which will come into force as early as January 1, 2022. "This creates new sales opportunities for us, of course. The same applies to the domestic market in Poland, as plastics and plastic packaging will also be banned - more or less - in our country from 2024 onwards," Sikorski says.

The international market for fruit and vegetable packaging is clearly changing, according to Sikorski. "Despite Covid, we are receiving new inquiries every day, which in my view is a clear sign that food retailers have recognized the issue of sustainability in product packaging and are taking it seriously. We now also see this development at discounters, whereas, until recently, this market segment was lagging behind." 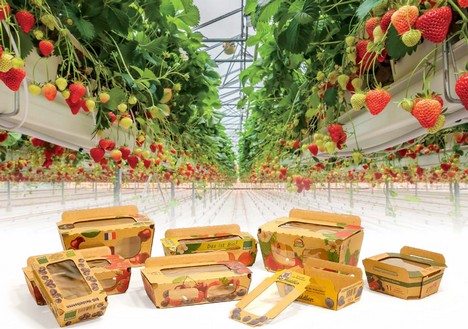