While there have been widespread reports about the significant losses of dairy cattle, hogs, chicken, and egg production because of British Columbia’s recent and devastating floods, produce production in the province has also felt some effects from the natural disaster.

At Discovery Organics in Vancouver, B.C., Randy Hooper says that only two of the smaller farms they work with were flooded. “There is little impact to vegetable production. The season is over and very little production in those flooded areas,” he says.

That said, Hooper does note that some impact could be felt on berry production. “There will be some loss, but only five percent of our berry production is in flooded areas,” he says.

Long-term effects?
“I’m not affected, but we won’t know the long-term damage to the berry crop farms that were affected until spring. It could be significant,” adds Rhonda Driediger of Langley, B.C.-based Driediger Farms

Indeed, according to the BC Blueberry Council, there is some impact on post-harvest activities, but the main concern is plant health. “If the fields remain flooded longer than four days, significant damage to the roots can set in. Being a perennial plant, any damage to the root could lead to various issues, including plant death,” says Clara Morán of the BC Blueberry Council based in Abbotsford, B.C. To support growers in the flooded region, the Council is exploring private contributions for affected growers. 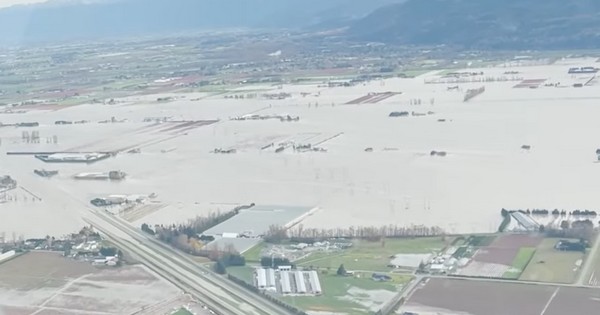 While there is not a large number of greenhouses in the region, some growers were affected,  according to the BC Greenhouse Growers’ Association. “We have a few greenhouses in the Sumas Prairie that are still under water and evacuation order,” says Linda Delli Santi of the Surrey, BC.-based association. She notes about five greenhouses are affected, which represent less than 200 acres. “One member has two greenhouses side by side in that area; one had 30 inches of water while the other had only two inches. It’s the lay of the land.”

Infrastructure concerns
Naturally, infrastructure damage is a concern, particularly boilers, pumps and motors, and electronics. “If the boiler’s been damaged, for example, and we’re going into winter, frozen pipes will be an issue as well,” Delli Santi adds.

Then there is the matter of logistics. Delli Santi notes that one grower who mostly grows peppers has reported shutting down production two weeks early,  and has thus lost those two weeks' worth of product and remaining product in his warehouse. “He can’t move it because the roads are backed up,” she says. She notes that the road from Delta, B.C. to the U.S. was flooded for a day or two but has since cleared up. “But I had one marketer say they just canceled their orders to Saskatchewan and Manitoba,” says Delli Santi. After all, major highways connecting B.C.’s lower mainland to Alberta have been affected. “They could truck it, but it would add to the cost because they’d have to go down through the U.S.”

Following the heat
These floods are just the latest climate-issue concern for B.C.-based growers and shippers. “We had far more damage to fruit and vegetable production here from the heat in June when daily high temperatures were sometimes 10C degrees above record and fruit growing areas saw temperatures close to 50C,” says Hooper.

Sukhpaul Bal, president of the B.C. Cherry Association based in Kelowna, B.C., agrees. “We’re concerned about the frequency of these drastic, dramatic events. It’s increasing. This event occurred in the Fraser Valley, but we had the heat dome in the summer in the province. What is going to hit us next?” asks Bal. He points to consecutive climate issues seen annually by cherry growers in recent history: in 2019, it was excessive rain right before harvest, in 2020, a significant cold spell reduced the crop, and this past summer, the heat dome, which also affected the crop.

In fact, since the summer heatwaves, Bal says the association is meeting with both provincial and federal governments to discuss how government policies are being planned with climate change in mind. “That’s where a lot of thought has to go in,” he says, “because every season we try to bounce back from a climate event and then we get hit with something else.”