Neopestalotiopsis species are causing emerging strawberry diseases worldwide. The spread of these diseases is associated with the trade of transplants.

There is some confusion within the taxonomy of Neopestalotiopsis species, as the genus has gone through multiple reclassifications over the years, EPPO reports. 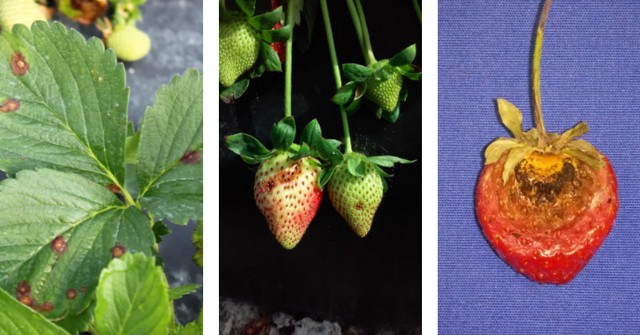 Neopestalotiopsis species cause leaf blight or spots, shoot dieback, fruit rots, and postharvest diseases on a wide range of hosts. They can also be isolated as endophytes or occur as saprobes on plants.

The strawberry disease was first reported to be caused by Pestalotia longisetula (later renamed as Pestalotiopsis longisetula) in Florida and Israel in the 1970s. In these initial reports, the pathogens were mainly associated with fruit rot, but more recent reports also include root and crown rot which can lead to crop failure. They involved at least 4 different species that are closely related: Neopestalotiopsis clavispora, N. mesopotamica, N. rosae, and a new Neopestalotiopsis sp. However, as noted by Baggio et al. (2021), some species may have been misidentified.

Neopestalotiopsis clavispora was identified in 2016-2019 as causing crown and rot root in strawberry in China, the Republic of Korea, Uruguay, Spain, Argentina, and Italy. Neopestalotiopsis rosae was identified on strawberries in Egypt, China, Mexico, the USA (Florida), and Taiwan. Analyses conducted by Baggio et al. (2021) concluded that the isolate identified as Neopestalotiopsis clavispora in Spain by Chamorro et al. (2016) should be considered as N. rosae. Baggio et al. (2021) also suggest that N. rosae is a synonym of Pestalotiopsis longisetula. N. rosae was also recently identified as causing stem blight and dieback of blueberry plants (Vaccinium corymbosum) in Peru, and foliar and fruit spot of pomegranate (Punica granatum).

Neopestalotiopsis mesopotamica was identified as causing crown and root rot in strawberry in Ecuador and Iran. Finally, a new Neopestalotiopsis sp. has recently been observed causing severe outbreaks in the USA (Florida, Georgia) and Canada (Ontario). All transplants originated from the same nursery in North Carolina.