German snack cucumber grower Friedhelm Kartzinski has had many problems with his irrigation water over the past year. Pythium, in particular, was a recurring problem. Together with EVE Techniek, the grower from Weener looked for a solution, which was found in a modified water system with UV disinfection. Even three hot days with excessive evaporation did not pose a problem.

In the past, the grower had to catch up on watering because his system could not cope, as Marco Evers and Piet Veenstra from EVE Techniek know. Marco: "The plants evaporated faster than the system could supply them with water. By adjusting the system from nine to four tap sections, the system now has more peace of mind and the grower can get the job done quicker, even in very hot weather."

Friedhelm nods. He says that this summer, three days with over thirty degrees Celsius on the thermometers gave him no problems, but it was a good test for his new system. "The evaporation was nine litres per m2, but my new system is calculated for a maximum evaporation of seven litres m2. In the end, it wasn't a problem, because the system was able to handle it well." 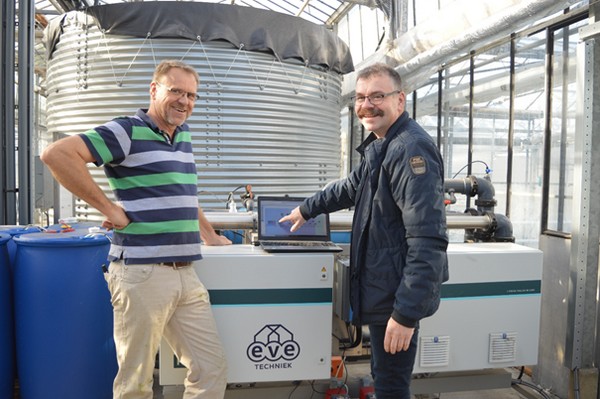 Friedhelm Kartzinski (left) with Piet Veenstra (right) with the Priva Vialux MDUV unit that is part of the new irrigation system that EVE Techniek installed for the grower.

Pythium
The grower of snack cucumbers is connected to a ring loop that supplies him with water, just like many other growers in the greenhouse horticultural area close to Papenburg. The water comes from the river Ems, on which the Meyer Werft shipyard is also situated. Standing in the greenhouse, Friedhelm can see the cruise ships. Friedhelm: "I'm at the end of the loop, which causes the water quality to fluctuate quite a bit." Marco agrees. "Sometimes his water turned out to be dirtier and darker than others. Water tests that he had done subsequently revealed Pythium in particular as a problem." 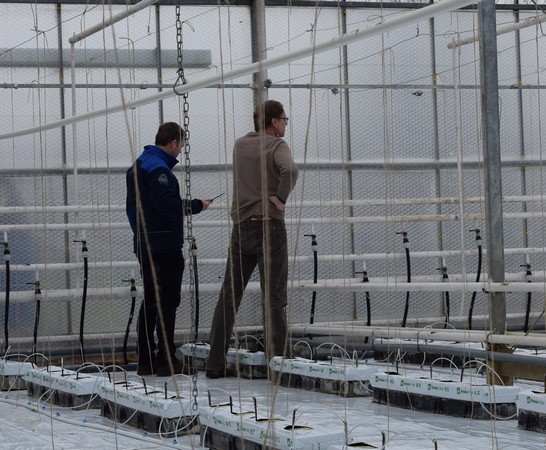 Marco Evers of EVE Techniek explains the system to Friedhelm

Loop system
It was therefore decided to focus on proper cleaning and disinfecting of the water entering his greenhouse. Marco and Piet walk through the installation and discuss the many process steps. "Everything starts with the water coming in from the ring loops 'under pressure'. Even before it goes through the sand filter, we already dose hydrogen peroxide in the new system. That's how we break down the first particles." 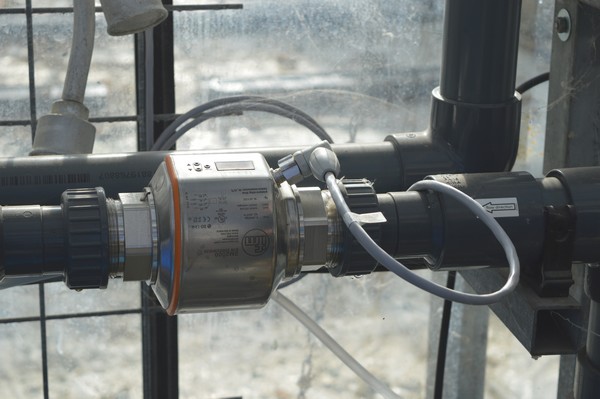 The water from the ring main comes in 'under pressure'. The liter counter here in the photo ensures that the correct dosage of hydrogen peroxide is used.

Automatic backwash
A liter counter has been built in to ensure that the dosage is correct. Piet: "It controls the pump. After the first dose of hydrogen peroxide has been added, the water goes through the sand filter. The sand filter is then rinsed out once in a while to maintain proper operation. Marco: "This, too, is automated. The Priva Connext computer monitors this process and knows after how many cubic meters a flush out is required. The grower discharges the rinsed water into the sewer system. If necessary, he can adjust the setting himself and do the flushing more or less frequently." 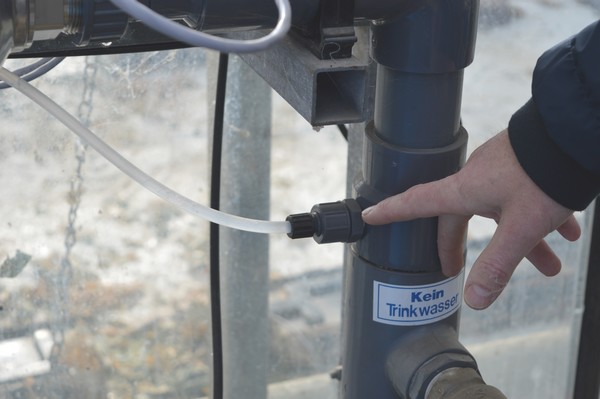 Here the hydrogen peroxide, Huwasan, is dosed for the first time in the process

Snack cucumbers
After the sand filter, the water moves from one side of the aisle in the one-hectare greenhouse to the other. In the meantime, Friedhelm talks a little about the company's history. As his surname suggests, his family comes from East Germany. His father left in the early sixties, the time of the Berlin Wall, and started growing crops in north-western Germany at the request of the government. "He first grew cut flowers, later pot plants, and after I joined the company, we switched to growing snack cucumbers in 2012." 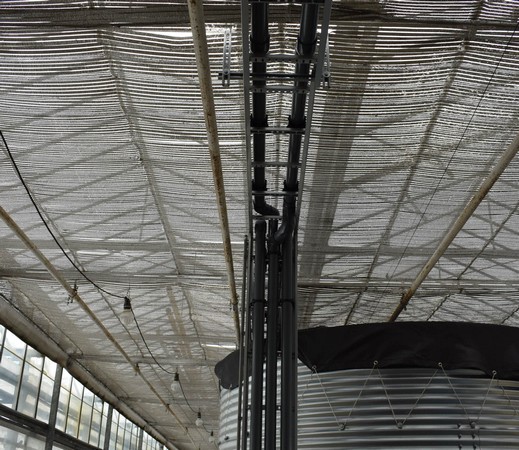 Gartenbau Kartzinski was the first in the Papenburg region to do so. Friedhelm: "With a greenhouse covering one hectare, we were too small for the profitable cultivation of regular cucumbers. By now, there are several growers here with snack cucumbers." 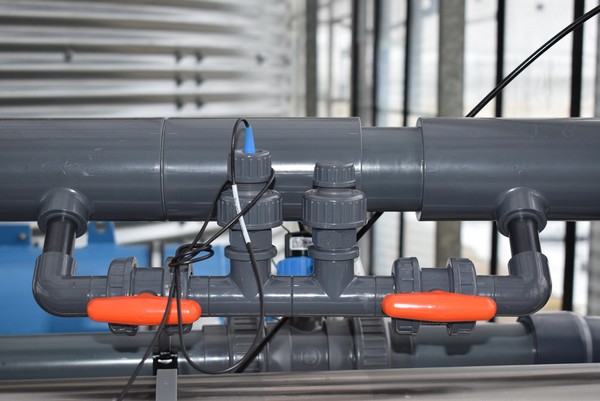 The first
Back to the watering system. Marco knows that Friedhelm has a first in the region with that, too. "He is the first grower here to choose a Priva Vialux MDUV unit." That unit draws in the water from the silo in which it comes after the first filtration process by means of the sand filter and the use of hydrogen peroxide. "In the unit, there are four UV-C lamps for cleaning and disinfecting the water. Before the water goes through there, we dose hydrogen peroxide for a second time."

Valve
To ensure that the UV-C lamps stay clean, the PH value of the water is closely monitored. The water that passes the UV-C lamps returns to the dirt silo when the installation is started up. Piet: "We repeat the above process of UV-C disinfection until the UV-C lamps are at full strength. Only then does a V5 valve in the installation switch on and start the regular cleaning and disinfection process, with which the grower finishes the daily supply of water that is stored in a separate silo." 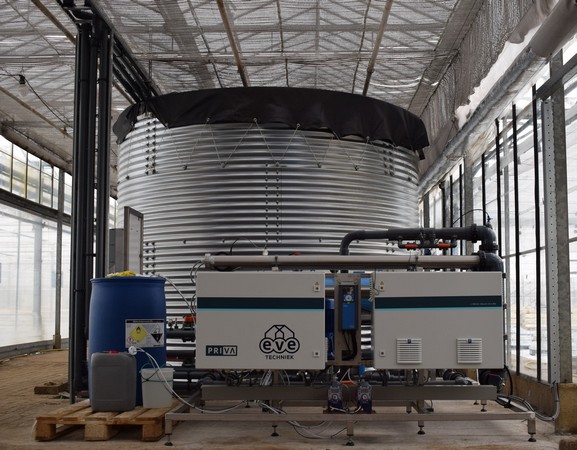 The installation can process four to eight m3 of water per hour, depending on how dirty the incoming water from the ring loop is. Even this summer, with the three hot days, that proved enough. 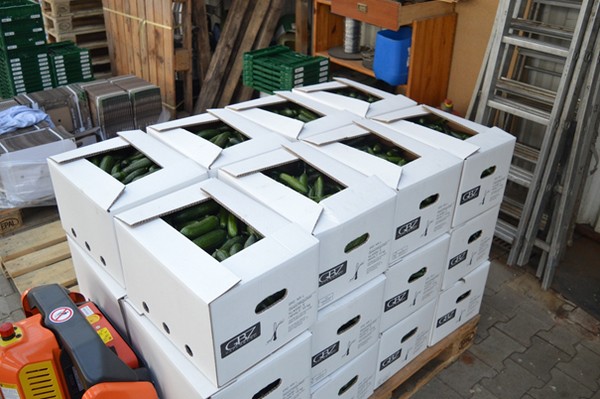 The last harvest of 2021 at Gartenbau Kartzinski

Certainty
Friedhelm has no plans to expand his cultivated area any further, so, with the system as it is now, he is ready to grow snack cucumbers for many more years without Pythium problems. But first, it is time for the crop rotation. This year, the crop rotation started one week earlier because of the energy crisis: the last boxes of snack cucumbers went to Gartenbau Zentrale Papenburg in week 41. In February and March, Friedhelm will start his cultivation again, and his product is already sold for 2022. That provides security, as does his new watering system.