Spanish deliveries increased, forming the basis of the bell pepper assortment. The previously dominant Dutch lots lost importance and were no longer consistently convincing in terms of quality: their season was nearing its conclusion. The presence of Belgian products also diminished, according to the latest BLE market and price report. 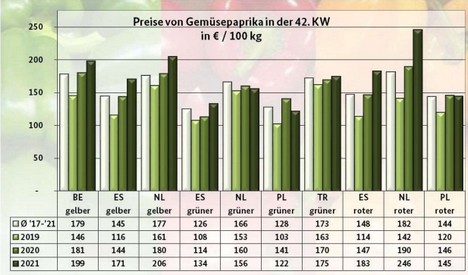 From Turkey, only green and red items were supplied. Polish items, as well as first Moroccan imports, played a complementary role on various occasions. Class II offers from Germany, the Netherlands, Belgium, and Poland were frequent, which had a negative effect on the prices. In general, demand was satisfied without any effort. Excessive inflows from Spain caused downward price corrections, generally affecting the entire range of goods. In Berlin, Polish products were mostly responsible for the price reductions: these cost a mere €5 to €7 per 5 kg carton and thus dragged down the prices of the competition.

Cucumbers
The campaign of Belgian, Dutch, and German lots, on the other hand, was nearing its end, and unloading was considerably limited. Demand was not particularly strong and could be met without difficulty.

Tomatoes
In the case of TOVs, mainly Albanian, Polish, and domestic fruits complemented the assortment dominated by Dutch and Belgian batches. Regarding flesh tomatoes, the first Moroccan imports arrived to join the dominant Belgian lots.