Wholesum, Fair Trade certified growers and shippers of organic fresh produce, has completed a major expansion at its distribution center in Nogales, AZ.

Construction began in early 2021 and concluded on October 8th with a 10,000 square foot addition to the current facility. The warehouse’s enhancements include two cold rooms with increased inventory storage capacity and accessibility, LED lighting with motion sensors for more efficient energy use, an updated dispatch office to accommodate the growing team, and a new repack area to improve packaging capabilities. With sustainability in mind, the company also plans to extend its current solar panel system to the expanded area and to add an additional dock to increase the use of renewable energy at the facility. 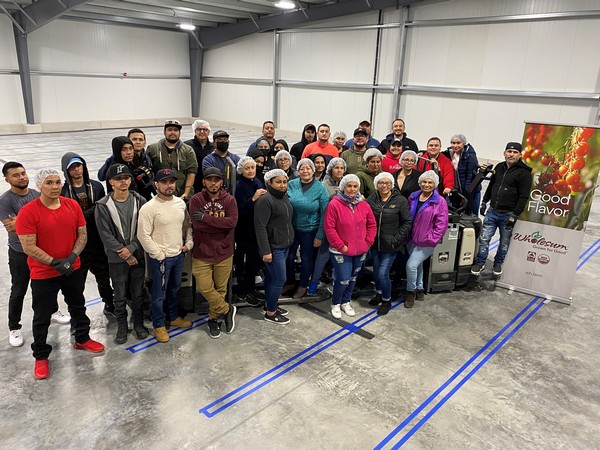 Construction began in early 2021 on the expansion and concluded on October 8th with a 10,000 square foot addition to the current facility.

In the last three years, Wholesum has responded to the increasing volume demands of organic fresh vegetables, including organic tomatoes, cucumber, squash, bell peppers, and eggplant, with expansions and renovations across the three family farms. “We are now positioned to support the needs of our customers not only through year-round supply of responsibly grown organic produce, but also in our logistic capabilities and a best-in-class supply chain,” says Crisantes.

Wholesum thanks the hard-working teams including warehouse and supply chain associates who helped bring this plan to fruition. “This expansion not only exemplifies our value of “problem solvers” by continuously improving upon our capabilities to serve customers, but also aligns with our vision of impacting the organic food industry through a model that cares about its workers,” adds Crisantes. The expansion will support local job creation, adding 12 openings of year-round employment to the distribution center. These employees will also benefit from the company’s Fair Trade program, which brings additional funds generated from the sales of Wholesum Fair Trade Certified produce that they can invest into impactful projects of their choosing.