At the moment, energy costs could become number one, but normally labor is by far the biggest cost in the cultivation of snack tomatoes. "Out of the labor task, harvesting is the biggest part," says Ab van Marrewijk of Dutch snack tomato growing company Greenco. Since the end of August, a harvesting robot - a prototype of the Virgo from AppHarvest- has therefore been driving through the Greenco greenhouse in Helenaveen. The developers of the robot also see opportunities in other crops, like strawberries and (snack) cucumbers. 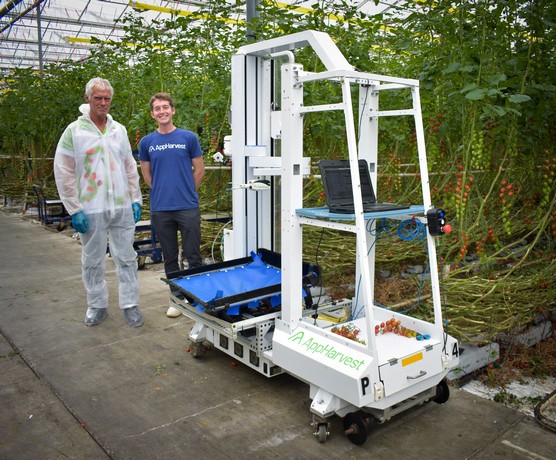 Cameras and lasers
Cameras and lasers scan the plant and the robot gripper quickly grabs the top snack tomato from the vine. With a twisting movement, it is then removed from the vine and crown and released, whereupon it falls onto a protective cloth at the bottom of the robot and rolls into the crate. Because the technology behind the robot is still being patented, the Virgo did not drive through the paths during yesterday's demonstration, but the tomatoes were picked from the developer's hands.

Normally, Virgo rides over the pipe rail installation, says AppHarvest's Robot Operations Engineer Will Twait, who has been in Helenaveen since the end of August to optimize the robot and its behavior in the greenhouse. He shows that extra cameras have been mounted on the harvesting robot, and the continuously made recordings are analyzed by his colleagues in the US to further refine the algorithm. "We don't want the robot to damage the plants, nor do we want it to interfere with the daily work in the greenhouse," says Will. The tests in Helenaveen showed, for example, that the long trusses of tomatoes move after they are harvested, making it difficult to harvest the next tomato immediately. The light also proved to be very different in Brabant than in the Appalachian Mountains, where AppHarvest's own greenhouses are located.

That is what makes it so difficult, says Ryan Knopf, vice president of technology at AppHarvest via video link. "Every plant is unique. Robotics in e-commerce is also a thing, but DVDs are all the same, making the task uniform. In a greenhouse, you would want that too, but plants have their own will. That makes the task a lot harder. It's the leading edge of AI and robotics."

Cameras and lasers in the background are used to position the tomatoes. 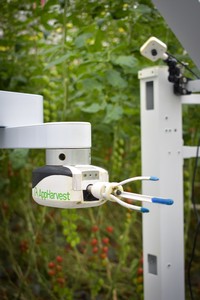 Greenco's growers have been working with the robot developers for several years now, first in the capacity of the predecessor RootAI, which was acquired by cultivation company AppHarvest earlier this year. "The labor costs in the cultivation of cherry tomatoes are relatively high, also compared to vine tomatoes, while the harvesting process is relatively simple. The tomato does not weigh much and is fairly loosely connected to the tomato crown. That makes the potential for robotization in cherry tomatoes great," says Ab van Marrewijk.

Moreover, labor is increasingly becoming a bottleneck. Per hectare, there are 8 people running around to harvest. "Saturday used to be the most important harvest day here, for we worked with many schoolchildren. Nowadays, there are far fewer of them. Every year at the beginning of the year it's challenging to get enough people." And that does not just apply to Greenco itself. "In recent years we have started growing on smaller acreages ourselves and we are working more with other growers. There are still more growers who want to work for us, but labor is a big problem. If we can offer to help them with the robot, 1 and 1 is 3 after all."

Then there is the desire for innovation. After all, Ab is responsible for Research and Development within Greenco, and if he takes a critical look at tomato cultivation, little has actually changed in the last twenty years. "In agriculture, there has been much more robotization, but in horticulture, we have actually been standing still for twenty years. This could possibly mean a big change." He does not foresee an empty, robot-run greenhouse, without any employees, "but a greenhouse in which the employee's roles change: in which the robots are in the service of the workers." In the long term, AppHarvest would like to use the robots' sensors to monitor the status of the crop and predict the upcoming harvest. 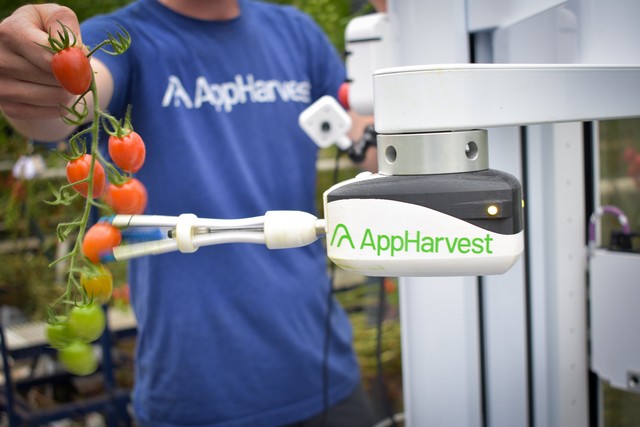 Dutch masterclass
It is also because of these plans for the future why AppHarvest is so happy with their Dutch partners, adds Ryan. "Our goal is to eventually develop a platform that can work in all sorts of crops with a weight of up to 500 grams. The knowledge of the growers is indispensable in the development of such a robot. The Netherlands is the top of the top - we are getting a masterclass in how it's done."

The harvesting robot will make its last round in the greenhouses in Helenaveen this week. Then it will go back to the US, where the next prototype will be further tested in the tomato greenhouses of AppHarvest. The company hopes that the robots will be available for the market from 2023. Ab: "It is such a large project that it will not happen overnight. When I see what they have started, we have already made huge steps forward, and it would be nice if it were operational in about four years' time." 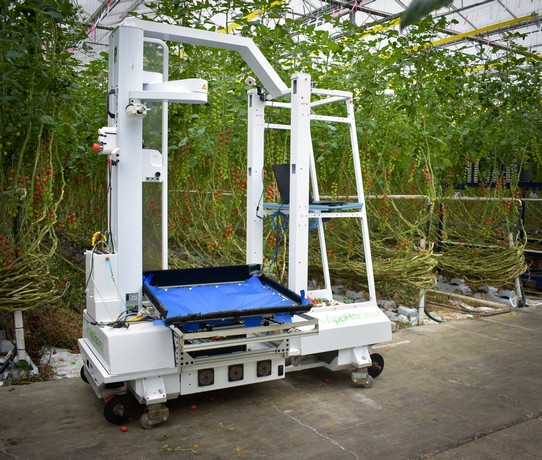