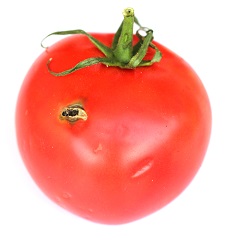 Tomato producers across South Africa are facing outbreaks of Tuta absoluta, or tomato leaf miner, an aggressive pest of the Solanaceae family, despite a cold winter that generally depresses population numbers.

Some tomato producers have already seen their entire tomato crop destroyed as they lose the chemical battle against exploding insect numbers, which can swiftly spill over from one farm to its neighbors. "That Tuta is a big problem and is going to become an even bigger problem is without doubt," remarks a tomato trader. He adds that monitoring and combatting tomato leaf miner is one of the biggest costs for tomato producers, even though this insect pest was unknown in South Africa a mere six years ago.

However, the current outbreak is not worse or more prominent than earlier outbreaks, notes a tomato specialist at a seed company. All commercial cultivars are equally susceptible to predation by the tomato leaf miner.

Over the past two weeks, tomato supplies were not very high on the market, but whether that is the result of tomato leaf miner damage or whether that is the effect of a severe hailstorm that hit north of the Soutpansberg Mountains in early October is impossible to say.

Chemical resistance builds quickly
Pheromone traps for male insects are set out with new plantings, depriving female insects of seed to fertilize their eggs, but this strategy is only effective as long as their numbers are low. When the population increases, systemic chemicals are needed with simultaneous withdrawal periods. This makes it difficult to control insect numbers as they build up a resistance to chemicals quickly, tomato specialists say.

Moreover, the price of chemicals to combat tomato leaf miner increased over the past few months to almost double its price 18 months ago, producers remark.