Spanish snake cucumbers took off massively, taking the lead in the market. Dutch and domestic offers followed, and Belgian shipments completed the market. In Munich, there were also Greek lots from midweek onwards. The end of the season for Central European products is imminent. Volume-induced, their quotations often tended to go upwards, it says in the latest BLE market report.

Spanish articles also increased in price. In the case of mini cucumbers, domestic and Dutch deliveries dominated, but products from Spain also arrived in Frankfurt and Munich. Turkish and Greek goods completed the range of products on offer. Prices often rose slightly. 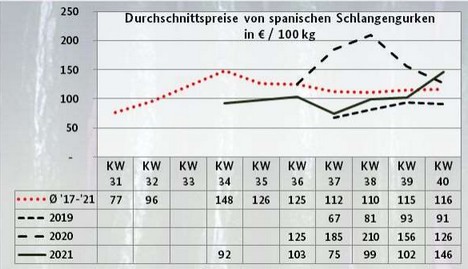 Lettuce
Belgian and German offers shared the market. Prices remained within their previous ranges as demand was adequately met.

Tomatoes
As the steady and quite vigorous customers were adequately served in all commodity segments, prices remained largely within their previous ranges.

Sweet peppers
While Dutch deliveries decreased in line with the season, Spanish shipments gradually expanded. This had an impact on prices, which overall trended downward.

Read the complete report (in German) at BLE.