Will growers be replaced by technology? 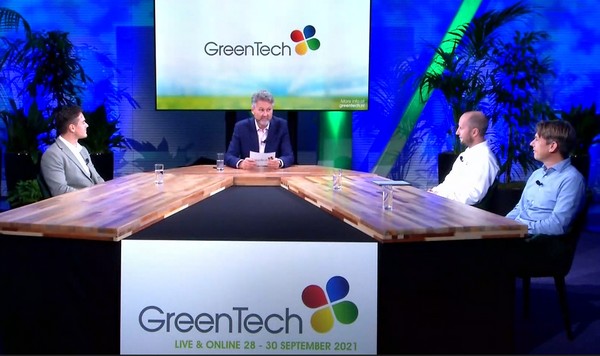 Of course, now that the industry is facing a “human resource deficit,” as moderator Andrew Walker calls it, the idea of automated greenhouses becomes even more attractive. As Peter Steeneken, Professor Dynamics of Micro and Nanosystems at the TU Delft says, “eventually you would not need all those people, you would want the computers to do everything for you. People train the systems who can then perform by themselves without resorting to these experts.”

“Today, on a scale from 1 to 10, Europe is at a 5. If the growers would use all the technologies that are available they would already be at 7, so there is more potential than that we are currently implementing in the greenhouse. A big part of that is the social innovation needed, training the people to work with the digital services,” Klaas van Egmond, Cultivation Engineer at Delphy, says.

Some growers might see the autonomous greenhouse as a threat; what if the machines replace them? Klaas, however, does not believe it to be a threat at all, “because to build the digital models, you need to understand the progress of growing crops. The knowledge will always be needed.”

“I believe the future of the greenhouse will be factory-like, mass-production style, and that is going to need a lot more automation,” Bram Koppert, VP Strategy & Commerce at Priva Horticulture, said.

Peter agreed and added that he believes “more diversity might arise in the types of greenhouses, so you’ll probably have the big production greenhouses, but maybe greenhouses will also move closer to the user. There might be greenhouses that will be producing the food at the place where it’s needed, and if you don’t need a grower in every greenhouse, that will become more feasible in my view.”

“To have 1 person not growing 10 hectares but 100 hectares from control rooms, where a few people are controlling a lot of greenhouses worldwide, I think that will be the future. Moreover, the automation of the horticultural industry attracts young people, also people without a background in horticulture but with, for example, a computer science background,” Klaas added.