Dutch tomato grower Koos van der Burg has been around for a while. He was already paying visits to the regional Horticultural Research Station back in the days when, "after entering, you saw all kinds of measuring equipment hanging off the plants that made you think: 'What am I supposed to do with that?'"

Back then, the techniques were like magic for Koos and for many fellow growers along with him. Sometimes they still feel like that, but gradually more and more techniques have been implemented in greenhouses. Koos keeps a close eye on new techniques and frequently dares to test them in his own facility in Berkel en Rodenrijs. Various sensors assist him in these tests, and since this year, that includes photosynthesis sensors. "I want to be able to recognize plant stress early in order to prevent nose rot." 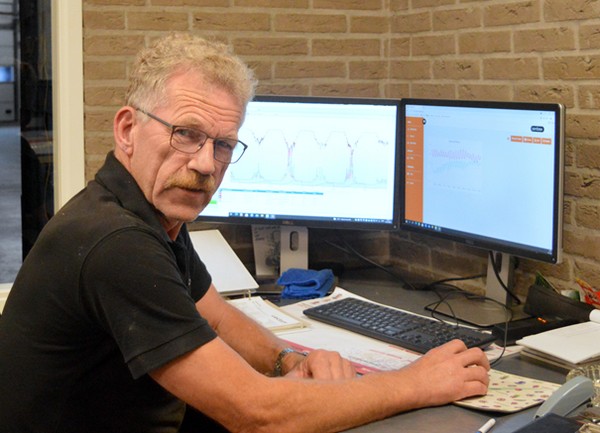 Grower Koos works with various sensors, which provide him with lots of data and help him with his crop management.

Testing innovations
Koos came across oxygen sensors from Sendot after investing in a nanobubble generator to enrich his irrigation water with oxygen last year. Once that installation started running, Koos was keen to keep track of what it was doing to his water. "You can see the bubbles with your eyes, but that's about it. With a sensor, you can actually monitor it."

Koos first came across a similar technique for oxygen enrichment back in the previous century but, in the end, that technique did not work optimally. "Once the water reached the dripper, there was no more oxygen-enriched water. This has now been solved with today's nanobubble technology, and I can check it with the measurements from the oxygen sensors."

He also monitors other techniques in which Koos has invested over the years via specific sensors. In this way, he makes sure that the techniques do what they are meant to do. Another example is the UV disinfection of his drain water. "I invested in this when the technique was still in its infancy and there was no way to monitor it. Now we use sensors that measure pollution. In this way, UV water disinfection remains optimal."

Although Koos has shown a willingness to invest in new technology fairly early on over the years, he will not just implement everything, although you would think so when Koos starts listing them. He says, laughing, that "over the years, I have tested everything, from seaweed substrates to scattering enriched grape seeds, and I also looked into growing on foam rubber when growers were researching it as an alternative substrate." 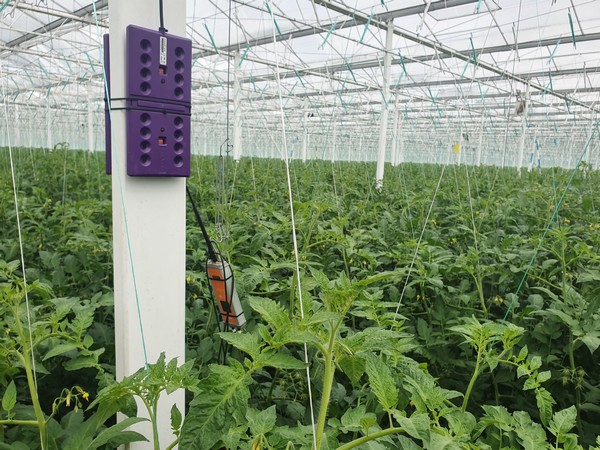 Nose rot
None of these innovations made it, not even in Koos' greenhouse. The tomato grower only invests in techniques in which he believes and, most importantly, in which he really sees added value, as is the case with the photosynthesis sensor he bought from Sendot this year. "The sensor provides me lots of data. The first thing to monitor this year is how it's going with the photosynthesis in the greenhouse, which the sensor allows me to do. I am not yet relying solely on the sensor. I mostly want to be able to recognize plant stress at an early stage."

This is very important for Koos because the type of tomatoes he grows, plum tomatoes, are traditionally somewhat more susceptible to nose rot. "That problem arises when the plant is stressed. As a grower, however, it's not always easy to identify, and often you don't see it until it's too late." Light irradiation plays an important role here, as well as air humidity, which Koos already measures, albeit no longer electronically, but analogously with 'a dry wet bulb'. "I removed the electronic sensors because I didn't find the measurements reliable."

To prevent nose rot, Koos not only relies on sensors. He also invested in diffuse coating on his greenhouse roof and adjusted the feeding schedule of his plants. He now grows with less nitrogen and potash and uses low-sodium fertilizers.

Practical
The reliability mentioned above is crucial for Koos and speaks for itself, but user-friendliness also plays a part, of course, and the product needs to be affordable. Koos says he relies on previous experience. "I have done fruit temperature measurements before. However, the sensors for this were attached to a large arm and that turned out not to be practical. For the people doing the cultivation work, the sensor was often in the way and if it was accidentally bumped into, the measurements were no longer correct. With the current mobile photosynthesis sensors from Sendot this is much easier. They are attached to the leaf with a clip, and I check them once a week. That works fine."

Compared to the 'magical equipment' of the past, there have now been significant advances in terms of affordability. Koos remembers the equipment he used to measure EC during the transition from soil to rock wool cultivation. "That equipment was also used by the Dutch government and it was very expensive, especially because of the calibration fluid needed. For a grower, however, it was not necessary to measure EC with an accuracy of two decimals." 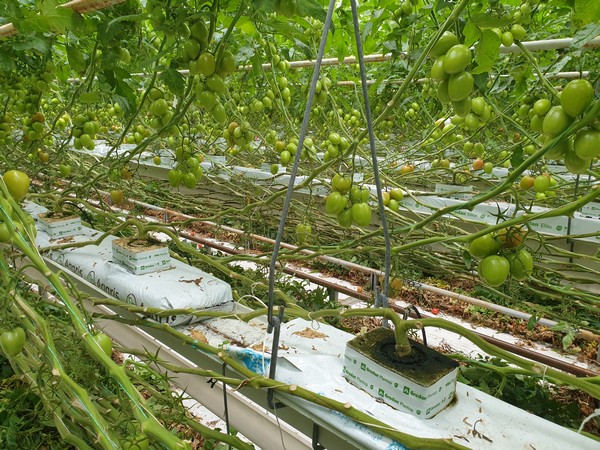 Koos conducts trials of sustainable substrate alternatives in his greenhouse. Sensors come in handy here to use data to provide insight into what the substrates do to the plant.

Smart tools
Growers can now take measurements much more simply and cheaply, for example with Sendot's sensors. Erwin Gräfe, Commercial Manager at the sensor developer, sits down with Koos and listens attentively to his experiences. "When we started, we immediately focused on affordable, practical sensors, not expensive laboratory equipment, but sensors that are suitable for the hands-on mentality that characterizes horticulture. Only in this way can growers take steps towards more data-driven cultivation. I myself expect that in a few years' time our photosynthesis sensors will have evolved into 'simple' chips. With more sensors, a more complete picture of the plant's situation in the greenhouse can be obtained."

Erwin is also curious about how Koos looks to the future. Is autonomous cultivation the future? Koos does not expect it to come to the point where growers are no longer needed. He agrees that the techniques are getting better and better, and above all, smarter, but he also mentions 'the art of being a grower'. "Ultimately, it is the grower who must continue to check whether things are going as desired, even if all sorts of techniques are available. In the end, I believe these will always remain tools."