Vancie Peacock grew up in Memphis, Tennessee, but always dreamed of being on a farm. When she was 4 years old, she said, she became a vegetarian because she did not want to eat animals.

The Schreyer Scholar and biological engineering major has further embraced agriculture since becoming a Penn State student. She was instrumental in the creation of the Schreyer Pocket Garden, a new two-year pilot program in partnership with the Student Farm Club, the Lion’s Pantry, and the University Park Undergraduate Association (UPUA) that will allow Peacock and other students to gain hands-on experience with growing vegetables that will support food security at Penn State.

Sustainability initiative
Peacock participated in the Pennsylvania School for Excellence in Agricultural Sciences program as a high school student, then became the director of food justice for UPUA during her first year at Penn State. 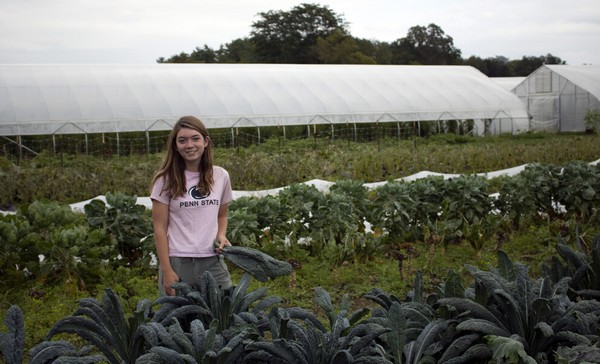 Peacock began working as an intern for the Dr. Keiko Miwa Ross Student Farm at Penn State, which recently revived a rooftop garden that had been used in previous years as the site for a research program. She researched potential locations for a garden on campus based on slope, sunlight, access to water, and other factors to learn which were most viable for growing vegetables, eventually deciding on the courtyard facing McKean Road outside Simmons Hall. She submitted a proposal to the Office of Physical Plant, with the stipulation that all food harvested would go to the Lion’s Pantry, which helps provide sustenance to Penn State students experiencing food insecurity.

“If it hadn’t been for Vancie developing all of those details, doing that research and legwork, recruiting some other students to her team to help her think through ideas, and build a budget proposal and a workflow plan and get the mission of the project down in writing, then I don’t think it would have gone anywhere,” said Leslie Pillen, associate director of Farm and Food Systems and the director of the Sustainable Food Systems Program, “because everyone needed something coherent and cohesive to understand what the commitments would need to be from the different partners involved.

Peacock, who will serve as the initial Student Farm intern who oversees the garden, said she hopes the Schreyer Pocket Garden will help educate her fellow students about food insecurity and will be the first of several others of its kind on campus.

“It’s going to be a small garden, but I think anything makes a difference,” Peacock said. “Most of all, I hope that when students walk by and see it, they will be inspired to take action. I want everyone to know that they have the power to create change. I hope it inspires people and also serves as a way to educate them.”