Scientists can switch on plants’ response to light

Scientists have figured out how plants respond to light and can flip this genetic switch to encourage food growth. The discovery could help increase food supply for an expanding population with shrinking opportunities for farming. The research on this genetic switch, led by UC Riverside, has now been published in the journal Nature Communications.

Almost every aspect of plant growth and development is influenced by light. Plants are able to sense light, as well as temperature, with a protein called phytochrome B. This protein conveys light information into the cell that changes the expression of genomes, altering plant growth. However, phytochrome B cannot interact directly with the plant’s DNA. For that, plant cells rely on a family of eight proteins called PIFs. 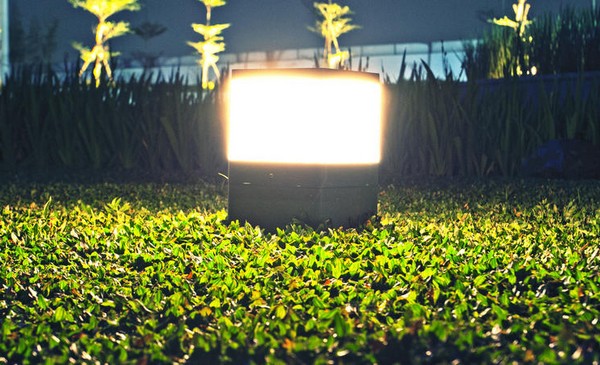 “The activity of these PIFs is directly controlled by phytochrome,” said lead study author and UCR botany professor Meng Chen. In addition to controlling the number of PIFs that accumulate in plant cells, scientists have learned that when phytochrome B is activated by light, it inhibits the activity of the PIFs.

“PIFS are like chefs in a restaurant. You can regulate the number of them. Get rid of half, for example, and you reduce the restaurant’s productivity,” Chen explained. “Alternatively, you could keep all chefs — in our case, PIFs — but tie up their hands. That could also slow down their work the same as getting rid of half of them. That’s what we’re saying.”

Activator regions
The scientists also found another key component of plants’ light response. PIFs have two parts; one part that binds to genes, and one that activates the genes, which tell the plant to perform different functions such as growing or flowering. This study found the precise location of these activator regions — the first time this has been done in plant cells.

To find this activation region, Chen’s team chopped the protein into many small pieces. Then, they examined whether any of the pieces were able to activate genes and found that one of them was. For more detail, the scientists then changed the amino acids on a PIF, where they believed the activator region to reside, and observed how the plant responded. This allowed them to be sure where the gene activator region is located as well as how it is built.

“This approach allowed us to surprisingly recognize the similarities between this part of the PIF in plants and a tumor-suppressing protein in humans,” Chen said. In fact, Chen said the basic gene activation mechanisms in plants, yeast, and animal cells bear remarkable similarities to one another. 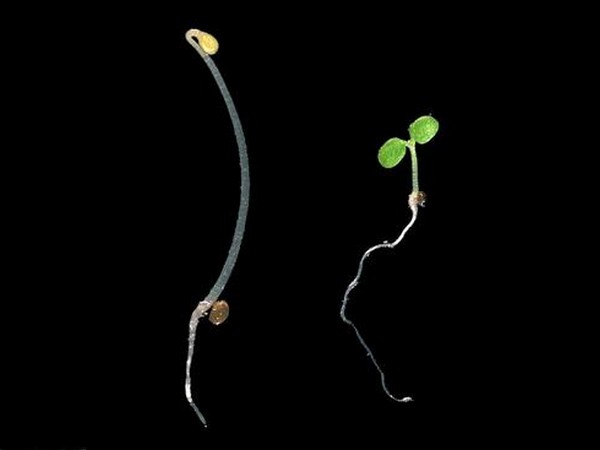 Dark-grown (left) and light-grown (right) Arabidopsis seedlings. In the dark, PIF3 (and other PIFs) has full activity, so the seedling is very tall. In the light, phytochrome B inhibits the stability and activity of PIF3, slowing seedling growth. (Meng Chen/UCR)

Manipulation
One of the biggest reasons to study these cellular functions is to manipulate them. In this case, the discovery could allow scientists to turn light and temperature-related genes on and off to benefit crop growers.

Part of the strategy to increase crop yields is to grow more plants per acre of land. Currently, if you place crops too close together, plants can “see” the competing neighbors through their shade, and they will use more energy for growing taller toward the light, but not necessarily for maximizing leaf growth and seed production. Alternatively, if plants can ignore their neighbors and concentrate on leaf and seed production instead of growing taller, growers can increase the yield on the same acreage. “You don’t want only stems to grow, you won't yield,” Chen said. “For that, plants need the energy to make leaves so they can increase photosynthesis, the process of making food out of sunlight. You want the right part of the plant to grow.”

Chen’s group demonstrated that by reducing the activity of PIF proteins, they could slow down stem growth. This study thus uncovered a precise way to make the plants grow shorter, so that seeds, fruit, and edible portions of the plant can grow, even in shade.

“Now we know how plants turn genes on and off in response to changes in light and temperature,” Chen said. “It’s the first step toward controlling their responses to light and temperature, and making them more tolerant of different, sometimes challenging environments in a changing climate.”