How self-sufficient is the UK, fruit and vegetable-wise?

The United Kingdom relies heavily on vegetable, and especially fruit, imports. They grow just over half their own vegetables. There were fewer imports in 2020, but production remained the same. The UK's vegetable self-sufficiency rate, therefore, increased. It rose by about three percent to 56%.

That ended a long-term downward trend regarding vegetable self-sufficiency. When it comes to fresh fruit, 16% of domestic consumption comes from products grown on British soil. That's the same as in previous years. This is based on figures from the UK's Department for Environment, Food & Rural Affairs.

Quite lopsided vegetable production: mostly large, full-soil products
In the United Kingdom, total vegetable production has remained fairly stable in recent years, at 2,5 to 2,6 million tons. It used to be higher. British vegetable farming consists mainly of large open-field vegetables. Carrots are, by far, the most important product; in 2020, farmers cultivated 700,000 tons. Onions and cabbage, with 400,000 tons each, follow.

Greenhouse vegetable production is rather modest, with a total of 270,000 tons. Here, tomatoes are the most important product at a mere 65,000 tons. The various vegetables' self-sufficiency rates vary considerably every year. It ranges from 100% for carrots, 90% for cabbage, and 60% for cauliflower, to 50% for mushrooms, 33% for lettuce, and 15% for tomatoes.

Strawberry production in 2020 was small, at 125,000 tons. In the two previous years, farmers in the United Kingdom harvested 140,000 tons of those. The self-sufficiency rate of UK-grown products varies. It ranges from 70% for strawberries, 40% for apples and raspberries, and 20% for pears. 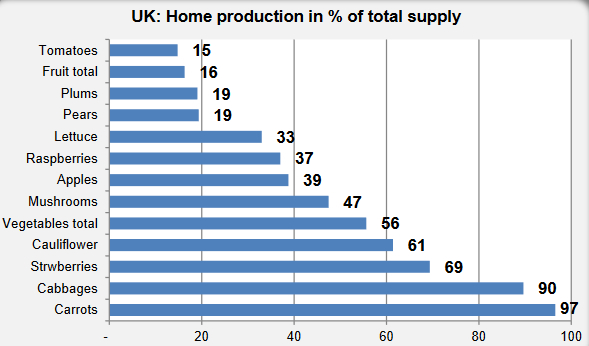 Third-largest vegetable, sixth-largest fruit importer in the world
With around 3,5 million tons of fruit and 2,2 million tons of vegetables, the UK is a major importer. For vegetables, it is at number three, after the United States and Germany. For fruit, it is in sixth position. It follows the US, Germany, Russia, China, and the Netherlands. Britain imports mainly tomatoes, 400,000 tons, and onions, 300,000 to 400,000 tons.

A hard Brexit was implemented on 1 January this year. That brings the UK's fresh fruit and vegetable import figures into question, for now. According to UK Customs, in the first half of 2021, imports from EU countries seem to have fallen 12% short of those in the first half of 2020. Imports from the Netherlands and Belgium could even be 20% down. Other sources have not (yet) confirmed this.