TOV offers came primarily from the Netherlands and Belgium. Items from Germany, Croatia, and Turkey complemented the action. Polish fruit appeared exclusively in Berlin. In the case of beef tomatoes, Belgian deliveries clearly outnumbered those from the Netherlands. On the other hand, cherry tomatoes mainly came from the Netherlands, while Belgian, Italian, and domestic products rounded out the ranges.

Belgian and Polish unloadings predominated in the case of round tomatoes, with Dutch and domestic products rounding out the range. The range of goods was relatively wide and could usually meet the demand without difficulty. Sales mostly improved somewhat so that merchants were quite able to raise their prices without slowing down business. Discounts were really only observed for batches with qualitative deficiencies. 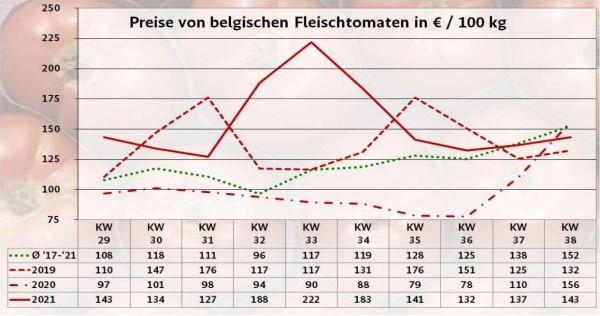 Apples
German goods dominated. Interest had improved slightly in some places, but availability was sufficient to quench it. Ratings often remained at the previous week's level.

Pears
Italian fruit predominated, mainly Santa Maria and Abate Fetel. Overall, demand was met without much effort, so traders rarely had to modify their prices significantly.

Table grapes
Italian lots dominated. Deliveries were very plentiful. Sometimes they outstripped interest, so that price increases were the exception rather than the rule.

Plums
Availability weakened, with the end of the season already in sight. However, the quality of the fruit was still convincing in most cases. The presence of domestic items decreased, but German Presenta and Hauszwetschge still predominated overall.

Lemons
The assortment consisted primarily of Argentine, South African, and Spanish deliveries. In most markets, prices remained stable, provided the quality of the items did not leave anything to be desired.

Bananas
In general, demand was adequately met as ripeners had sufficiently matched their supply to accommodations.

Lettuce
Regarding lettuce, Belgian and domestic supplies shared the market. Demand was somewhat weak so that distributors were rarely able to avoid discounts.

Cucumbers
The range consisted mainly of domestic, Dutch, and Belgian deliveries. Supplies from these three countries had been limited. In contrast, the Spanish campaign was slowly getting underway, as shipments apparently increased.