A nearly $4 million grant awarded to Penn State’s College of Agricultural Sciences will support an interdisciplinary, multi-university team of researchers as they investigate technologies designed to address labor shortages on mushroom farms.

The U.S. Department of Agriculture’s National Institute of Food and Agriculture grant is significant for Pennsylvania as the commonwealth grows approximately two-thirds of the nation’s Agaricus mushrooms.

Commonly known as white button mushrooms, they are among the most popular varieties among consumers, according to John Pecchia, associate research professor of plant pathology and environmental microbiology and director of Penn State’s Mushroom Research Center and Mushroom Spawn Lab. 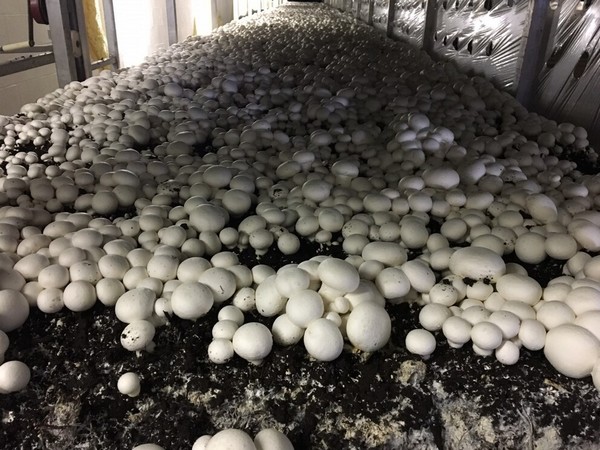 “During our regular meetings with U.S mushroom industry representatives, we’ve learned that the greatest challenge they face is a lack of workers,” said Pecchia, who noted that the nation’s mushroom crop was valued at approximately $1.2 billion in 2020. “Our goal is to alleviate these labor shortages by helping growers improve on manual harvesting efficiency and to develop mechanization to improve efficiency, productivity, and profitability.”

Harvesting by hand
He explained that because mushrooms are susceptible to bruising — and with quality being of the utmost importance — harvesting and packing are done by hand.

A recent study led by Kathleen Sexsmith, assistant professor of rural sociology at Penn State, showed that mushroom farms are short by as much as 20% of the ideal number of workers needed to complete these tasks.

Making this situation more pressing is that many of the nation’s long-time mushroom farms are not designed to adopt automated technologies that have been gaining acceptance in Europe, placing the nation’s growers at a competitive disadvantage.

Pecchia is leading a team of plant pathologists, agricultural and biological engineers, agricultural economists, and information technologists from Penn State and the University of Maryland to address these challenges through agricultural technology innovations. The project will build on previous Penn State research on robotic mushroom harvesting, which Berks County-based Giorgi Mushroom Co-funded.

The prototypes developed from this project have great potential to bolster the U.S. mushroom industry, noted Carolee Bull, professor and head of the Department of Plant Pathology and Environmental Microbiology.

Filling vacancies
“By improving labor efficiency, growers will be better suited to fill much-needed vacancies critical to the daily operations of their farms and processing centers,” she said. “We are grateful to the USDA for recognizing our faculty’s expertise and the importance of the mushroom industry to the U.S. agricultural landscape.”

Located at the north edge of Penn State’s University Park campus, the Mushroom Research Center features a spawning-casing area and a state-of-the-art composting facility where faculty and students research the white button and specialty mushrooms such as shiitake and oyster.

In addition to conducting research and outreach, faculty support the industry by offering the annual Mushroom Short Course, a two-day seminar for growers to learn about disease prevention and production advancements.