Adding a layer of light inside the greenhouse

While the greenhouse industry was once limited to natural sunlight and eventually HPS, continued technological developments are making it possible to fine-tune the lighting conditions inside greenhouses through LED technology, light-filtering films, and now, luminescent films.

UbiQD is an advanced materials company that designs luminescent films made with quantum dots, including its retrofit greenhouse film, UbiGro®, which can be installed in any greenhouse and modifies the photon flux received by the plants.

"UbiGro improves greenhouse light quality by modifying natural light to down-convert UV and blue wavelengths into longer wavelengths, namely orange and red," the team says. "More specifically, UbiGro converts roughly half of the incoming UV radiation and 24% of the blue light to increase green and red light levels below the film by up to 7% and 10%, respectively."

UbiGro adds a light layer through luminescence
The quantum dot-driven modification of the light spectrum is very different from the action of light-filtering films, which simply do not transmit particular wavelengths, thus reducing the total photon flux through the film. "With UbiGro, shorter wavelengths are converted to longer wavelengths which effectively maintains the amount of PAR light received by the plants while optimizing the photosynthetic flux density of targeted wavelengths. This down-conversion causes the orange UbiGro film to glow," explains Matt Bergren, Chief of Product.

"We don't want to get rid of all of the UV or blue because those wavelengths are important in the greenhouse for pollinator navigation (UV and blue) and photosynthesis (blue). By absorbing in ultraviolet regions, we can move those photons into PAR light while also tweaking blue levels." 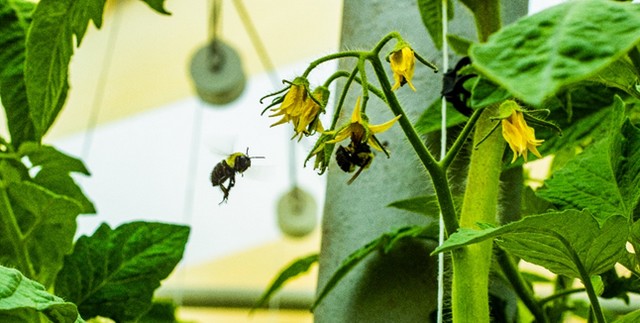 UbiGro has proven effective at improving greenhouse light quality across a wide range of latitudes, particularly in regions with high levels of natural sunlight. UbiQD has deployed its UbiGro film in increasingly large greenhouses and is running trials across the United States. The company has also deployed its product in 7 US states, Europe, Asia, and soon Mexico. According to Matt, developing a conclusive trial requires at least 3,000 square feet, with most UbiQD trials spanning 3,000 -10,000 square feet. UbiGro is easily installed as a retrofit above shade cloth and supplemental lighting.

Currently, the main crops under UbiGro are tomatoes, cannabis, and cucumbers, while there are preliminary trials over ornamentals, strawberries, peppers, and hemp.

The sales team added, a peer-reviewed article published in 2021
2021 proved busy for UbiQD as the company expanded its team, had multiple deployments, and engaged in multiple research projects. According to Mike Burrows, Vice President of Business Development,  UbiQD established a sales team in 2021 to help the company widen its reach and bring UbiGro to more growers. UbiQD's research team also helps growers develop trials with the film. Also, in 2021, UbiQD contributed to a peer-reviewed journal article published in Nature - Communications Biology, which focused on the improvement of spectral quality with quantum dot technology.