"It is of the utmost importance that robots are economically feasible"

Ridder adds robotics to its portfolio with MetoMotion investment

“Our goal is the autonomous greenhouse. Over the last couple of years, we’ve built a portfolio consisting of greenhouse technology products contributing to this goal; robots too can be a big part of this development,” says Joep van den Bosch, CIO with Ridder. Today, they reveal that since 2019 they have been investing in Israeli agtech startup MetoMotion, developer of tomato harvest robot GRoW. GRoW will be ready for commercialization in 2022 and will be available via the global sales network of Ridder. Remarkable is how the robot is equipped with two arms to detect and pick the trusses and how the platform also takes care of the container handling. In addition to the second investment in MetoMotion this year, Ridder has bolstered their robot venture by teaming up with Navus Ventures, a private investment fund affiliated with Dutch agtech company Lely, well-known for their milking robots.

Remarkable is how the robot is equipped with two arms to detect and pick the trusses and how the platform also takes care of the container handling. In addition to the second investment in MetoMotion this year, Ridder has bolstered their robot venture by teaming up with Navus Ventures, a private investment fund affiliated with Dutch agtech company Lely, well-known for their milking robots. 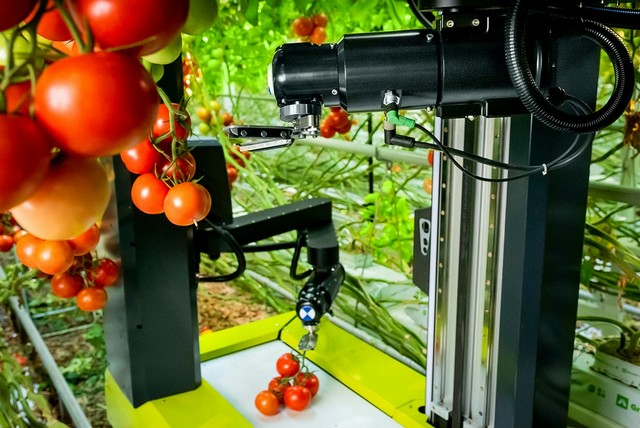 From 10 to 100 hectares
Ten years ago, Ridder was active in developing smart drive systems. By investing broadly in innovation and business development, they added many products to their portfolio over the last decade. “A growers’ green thumb will not be replaced by technology; rather, it will be strengthened by it: if they are currently managing 10 hectares, they might be able to manage 100 hectares with the right tools and technology. To achieve this goal, technology, data, and AI have to be better integrated into the greenhouse. That’s what we’re investing in: robotics can be a tool in helping the grower work more autonomously."

"Growers have to do more with less," Joep summarizes. "They have to work smart, not hard. Automating labor is a key component in that.” Behind the scenes, the company has invested in this market for a couple of years thus far. “Now we see that the market is ready for robotics.”

Dutch investments
Since its start in 2017, Israeli company MetoMotion has been developing its GRoW prototype by combining existing vision and robotic technology from other industries and by adding deep learning technology and horticultural knowledge. Ridder has been supporting the development and greenhouse trials of the MetoMotion GRoW since the company provided MetoMotion with a first capital injection in 2019. This year, Ridder further strengthened its commitment with additional investments.

“MetoMotion GRoW is the first example of how the future will look like. The greenhouse robots are doing routine tasks while the supervision and support are mostly done by remote access. This is better for our planet, better for greenhouse disease prevention, better for the overall social impact of foreign labor, and of course more profitable for growers,” says Adi Nir, CEO of MetoMotion. 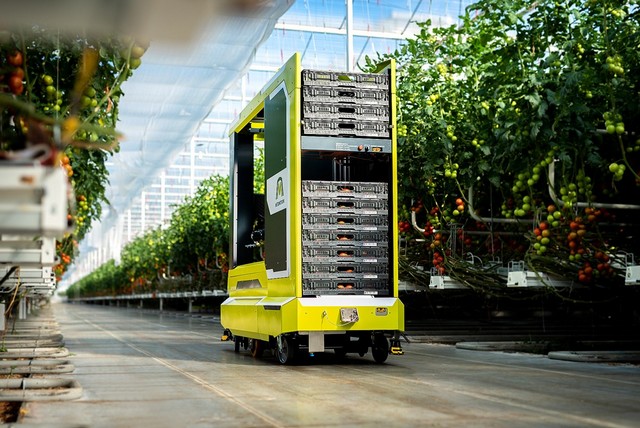 Greenhouse trials
Over the last couple of years, the robot has been thoroughly tested in the greenhouse of the breeding company De Ruiter Seeds and Dutch grower Duijvestijn Tomaten. Joep reveals that the currently developed solution is accurate and reliable enough to compete in price and performance with human workers. “To us, it is of the utmost importance that it’s an economically feasible solution,” Joep adds. That’s why the GRoW solution is equipped with two arms, harvesting TOV’s both sides of the path, and at the same time the platform takes care of the container handling. On the center aisle, a supervisor will provide the robot with a new harvesting trolley with new containers and directs the robot into a new path.

How to work with robots
With labor shortages all around the globe, that might sound like a dream come true, but Joep emphasizes that despite robotization having a big impact on companies, there’s still a long way to go. “Robotizing the greenhouse is a process in which gradually more and more tasks will be done by robots. A task for us is to educate growers on how to work with them. The key is to integrate robotics into the existing operational workflows."

“If a robot can harvest a truss, it can also cut a leave, which is a much easier job. And if cameras are looking for ripe trusses, they can also look for trusses that can be harvested next week and predict the upcoming yield. Together with growers, we want to develop these features.”

Technology available globally
According to Adi Nir, the partnership with Ridder allows MetoMotion to make this technology available for commercial high-tech greenhouse companies worldwide. And there’s more. In addition, Ridder bolstered their robot venture by teaming up with Navus Ventures, a private investment fund that is affiliated with Lely, a Dutch farming innovator known for its milking robots. “This extensive experience in agrifood robotics has helped us to further enhance the development of their robotic solution.”

“Lely has experienced how to develop a robust and reliable robotic solution and bring it to the market. Ridder has the network to do it in the horticultural industry. Thanks to this partnership, we can help growers much faster by addressing the current labor issues in the market and bringing the autonomous greenhouse one step closer.”