25 years of organic vegetable packages: "In our sector, your word is your bond"

You can have a great idea, but whether it will be successful remains to be seen. That was what was felt in 1996 when Sebastiaan Bos started delivering organic vegetable packages from home. He is now celebrating the twenty-fifth anniversary of his company Kievit and the number of participants is still growing.

Kievit delivers 3,500 packages every week. These are delivered to homes within a radius of 25 kilometres around Katwijk. There are vegetable packages, fruit packages, but also combinations with eggs and cheese. Customers can supplement their package with products from the organic web shop. In season, most of the vegetables come from own cultivation. 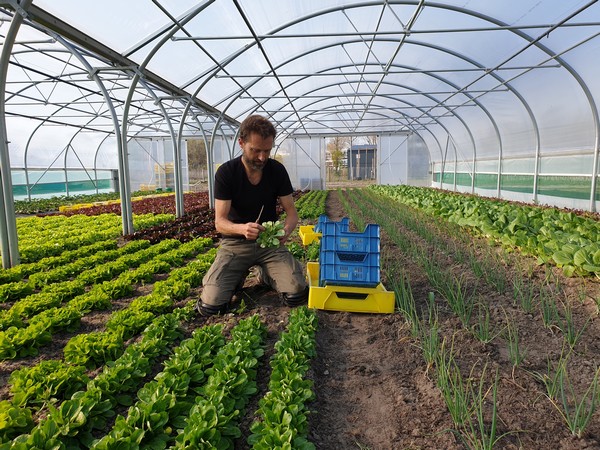 Gap in the market
When Sebastiaan applied to the Chamber of Commerce on 28 May 1996 to register his company, he did not exactly receive an enthusiastic response to his plans. Starting out as an organic grower, he was looking for a way to sell his produce without the 'whims of the wholesale trade'.

"I wanted to deliver parcels to homes and deliver directly to the consumer. Organic, parcels, home delivery... it was a niche at the time." And yet he didn't have to do much to get customers. "I put adverts in regional newspapers. It turned out that there was a group of consumers who felt it was a gap in the market. When I look back, it was primitive, not normal hard work, but also very adventurous. It was a real spectacle when new customers signed up every week."

The name Kievit that he gave his business says something about his vision. "A kievit (lapwing) is a brave bird that attacks herons and chases away storks. That's how I felt in the beginning. There was a company nearby that also delivered parcels. That company was really big in cultivation, trade and import. I went there on my bicycle to tell them that I was going to start a parcel business. Because we were in Leiden, we were in their area, after all. 'You won't succeed', they told me. That company - that stork - no longer exists."

Well thought-out logistics
After two years Sebastiaan let go of his own land and started working with a farmer in the neighbourhood. In 1999 the company moved from Leiden to Katwijk. Hesays the biggest challenge was the lack of start-up capital. "As a young entrepreneur, you find yourself in a poverty trap. You start without any capital. Now capital is free with low interest rates, investment platforms and green funds. For us, it took a really long time before we could make money and invest in the normal necessities, such as cold storage and a car to deliver the parcels. To go from idealist to viable business, we had to take a lot of steps. I have been approached by large parties to supply resellers. But I wanted to grow organically."

In that growth, logistics is an important factor. "Logistics is easily underestimated. I have seen many people fail in that respect. People often say: as long as you have your sales, you'll make it. But that is not true. In the growth of a company like ours, you always reach a point where you can no longer cope with the organisation. With 300 parcels, with 1,000 and with 2,000. Then you have to change up your logistics system. We try to organise our internal logistics as simply, but also as intelligently as possible. With room for customer wishes. If I were to write a handbook about how it works exactly, that book would be very thick." He calls his team of 25 employees the key. "It's almost like a ball game where you have to be able to play well together. You need people who can see exactly what needs to be done with as little explanation as possible. We have them and we take great care of them."

Sebastiaan himself can be found on the work floor every day. In the morning on the field, then in the processing hall. "You have to know your products well and be able to feel your customers in order to be able to explain to your suppliers exactly what you want. You can't do that from a small office. As a manager, I like to be on top of things. I think that's the only way to bring focus to your system."

Newsletter
In 2018 Kievit got hold of a piece of land in Katwijk. On 1.7 hectares, a large number of products are grown for the packages. For 'space eaters' such as cauliflower, winter carrots and red cabbage, Kievit can count on fellow organic growers. If possible in the Netherlands, and for some products with cooperatives in Italy and Spain.

"I have been working with most growers for a long time. I regularly hear from conventional sources that business relations assume risks and have to protect themselves against them. That is very different in the organic sector. There, you can do a lot on trust and goodwill. Your word is your bond."

The relationship with his customers is dear to Sebastiaan. Every week they find a newsletter in their packet with background information and tips about the products in it. "I tell them what we experience in cultivation and on the farm. There is also room for serious matters. If a product is disappointing - organic stone fruit is sensitive, for instance - I can explain why. And that it's important that you can't make a fair comparison between a conventional and an organic peach."

Survival year
A lot has changed in a quarter of a century. In recent years, organic has shifted from being just for a select group. There is a larger group of people who see the added value of it. There are also numerous companies that supply fruit and vegetable packages. Their number has certainly increased in the past years of COVID-19. Yet for Kievit, that does not mean a loss of customers. "2020 was a year of survival. The demand came from all sides and at the same time you have to ensure that the work floor remains workable. Many new customers signed up and our existing customers started ordering more products from the webshop. We still have a waiting list for new customers. During the winter, we have been busy dealing with this growth internally."

In the coming years, Sebastiaan wants to focus further on the internal processes in the company. "We are going to look at how we can get the logistics system even more streamlined. We are taking a close look at the packaging processes and want to reorganise the routes. We may have to make choices in our services. We also want to further refine our cultivation. When we acquired the land, it was almost a swamp. Reclaiming it was a delicate process. We are now discovering which crops are doing well and which we are less satisfied with."

Satisfied
Sebastiaan has no plans to expand his business in other regions. "When I started, I didn't realise that I actually took care of the entire chain, from field to customer. The other day I was at a short-chain meeting. Ten years ago I would have been sitting in that room on my own. The concept of the short chain has now become a whole story. I think it is a certain old-fashioned way of doing business that also has a right to exist. I have often been advised to set up branches elsewhere in the country. It may sound old-fashioned, but I don't need it. I like optimising that one Kievit enough. We are a healthy company. I'd rather focus on improving fennel cultivation, for example."

He admits that he is not much into luxury and that it does not drive him. "I live off the happiness of my customers. Sometimes I feel sorry for myself when I have to get up early to harvest, but when I have cut 300 kilos of fennel and realise that it will be on the customer's plate the next day, I am very satisfied. I have to work really hard and I don't have an Audi A6. But in general, I am happier than many other people I know. Whether you're happy is what it's all about in the end."