Lenzeel is a machine manufacturer in the Netherlands. They have successfully developed a patented leaf-picking robot. It can be used in high-wire cucumber cultivation. This innovative device picks leaves automatically. The machine was recently tested and picked at least three-quarters of the leaves low down on the cucumber plants.

Ever since high-wire cucumber farming was introduced, leaf-picking has been a costly affair. That's where Jan Lenders comes in. He's Lenzeel co-founder and owns Lenders Constructie. Jan and his partner Ed Zeelen devised a machine. It automates labor-intensive leaf-picking. They have made great strides in the last 18 months. The tests have been done, and the manufacturers can now share the results. 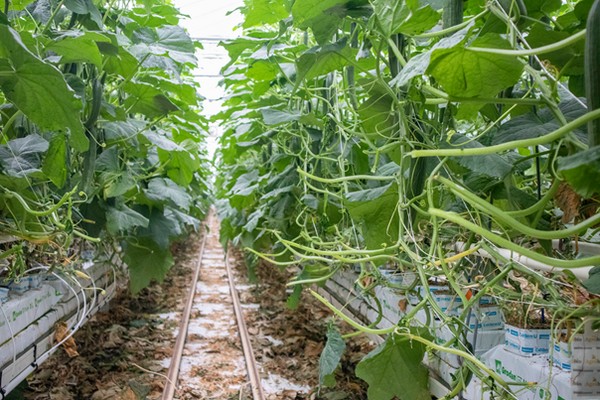 There's been ongoing testing and improvement of various prototypes. This means the Diplo, as the robot hails, should be available in January 2022. There should be an initial series of ten machines. Recent tests show that the robot removes at least 75% of the leaves from low down on the cucumber plants

The Diplo can complete a hectare in ten hours. That means it's a reliable and, above all, cost-effective asset in high-wire cucumber cultivation. That's according to the developers. They have now also involved several farmers in this robot's development.

How does it work?
The robot has now, completed many rounds in greenhouses. An operator prepares the Diplo for the row of cucumber plants. The operator sets the row length and switches the machine on. The device then drives itself into the row. And it plucks the leaves from the cucumber plant.

The designers based the Diplo's design on another Lenzeel patented picking system. The robot stops automatically at the end of each row. It then turns the picking unit 180 degrees. And it picks the other side of the row on its return trip. The picked leaves are shredded. They're ejected at the bottom of the row, alongside the pipe rail.

Once it's completed this cycle, the robot stops automatically. The operator then moves it semi-automatically to the next row. And the Diplo resumes its picking cycle.

The Diplo leaf-picking robot's result. An official launch is planned for later in the year.

As mentioned, the developers are aiming for a field introduction in January 2022. They're convinced the Diplo robot will be the next automation, saving, and revolution in high-wire cucumber cultivation.