From two a week to two a day per square meter

Cucumber production in Denmark does not normally include grow lights. But after several stays at nurseries abroad, where Mads Klarskov, grower and owner at Klarskov Gartneri, experienced and tested production with LEDs and adjustments in spectral distribution, the family-owned nursery Klarskov Gartneri decided to find out whether LED grow lights could be beneficial in its cucumber production in Denmark. Ultimately, they decided to install FL300 Grow and FL300 Grow White LED grow lights from DGT by Senmatic.

"During stays in Norway and the US I had gained experience with LED grow lights and played around with the distribution of red and blue grow light. I had also seen the positive effect on heat emission and reduction in energy costs. I gathered all that information and brought it back home. Everyone at our nursery was convinced that LED could be one of the changes we needed to improve and further develop our production," says Mads Klarskov and continues: "We clearly see a change in our production. We produce far more cucumbers, production times have improved, and we produce stronger plants and fruits of even greater quality."

And grow lights are certainly important for cucumber growth: If the light level drops below 120-130 µmol/m2, the cucumber simply stops growing, and does not start growing again until the light level increases.

"We clearly see a change in our production. We produce far more cucumbers, production times have improved, and we produce stronger plants and fruits of even greater quality," said Mads Klarskov, grower and owner at Klarskov Gartneri

"We now harvest the first cucumber in early February and the last in November. In other words, LED allows us to uphold our production figures during winter too," says Mads Klarskov. 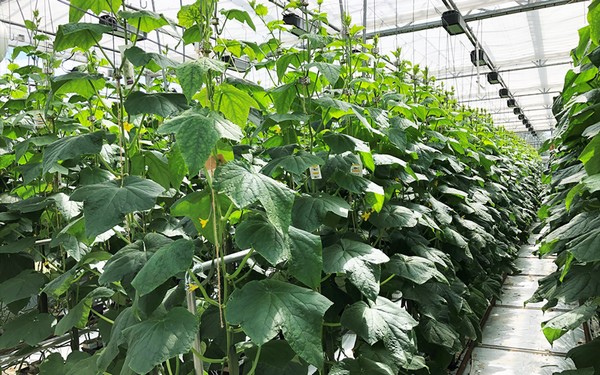 Investing in LEDs – a futureproof investment in quality
Many growers are reluctant to replace traditional lighting with LED because of the initial here-and-now costs connected to purchasing a larger number of LED fixtures. Although Mads Klarskov understands the wariness, he still encourages growers to look further into the future.

"As a direct cost, LED is the more expensive solution, but if you take into account factors such as expanded production seasons, energy savings and the improved heat distribution, because heat is emitted upwards from an actual heat source, rather than from light fixtures, LED is well worth the investment. You must set aside the time to discover and test the optimal recipe for your exact culture in your growth environment to achieve the stellar results", says Mads Klarskov.

Another benefit from installing adjustable LEDs is that plants grow smaller leaves (smaller leaf area). This leaves room for more plants and, as a result, more cucumbers. The use of LED is also reflected in increased cucumber quality. "We experience a more consistent quality and fewer crooked and uneven cucumbers," said Mads Klarskov, Grower and owner at Klarskov Gartneri.

LEDs in a tailored mix
The LED installation at Klarskov Gartneri consists of a tailored mix of FL300 Grow and FL300 Grow White. The two LED types vary in diode composition and therefore emit different light. Common for both is that the nursery can adjust on the spectral distribution themselves.
"The LED installation starts photosynthesis in the cucumber plants, while at the same time emitting pleasant working light for the employees. The grower can easily adjust and control spectral distribution and light intensity via our LED Light Controller – actually, you can control all LED grow lights by the touch of a single finger," said Morten Krage, Key Account Manager at Senmatic. 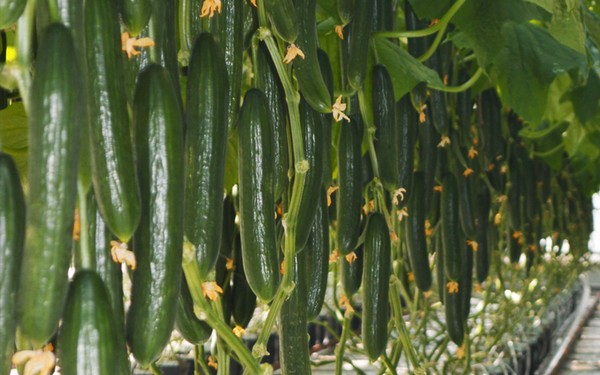 Always receive light plans before purchasing LEDs
The cucumbers at Klarskov Gartneri are grown in a “high wire system”, which meant that the common placement of fixtures was unsuitable. Instead, the grow lights are placed along each of the long production rows to expose all plants and cucumbers to the required amount of grow light. The fixtures’ distribution thereby ensure that all plants are exposed to light from the side, which has proven effectual.
"We recommend that you always receive light plans from all the suppliers you are considering to be sure that the grow lights will provide the sought-after effect and that you purchase the correct number of fixtures, neither fewer nor more than actually needed,' said Morten.

DGT by Senmatic’s light engineers and sales team always compose light plans prior to selling LEDs to ensure that the effect, the number of fixtures, and the placement is correct – and from it also the accuracy and output.

For more information:
DGT by Senmatic