Sunlight does not work “on” and “off” like a light switch. That's why the team with Sollum Technologies introduces the SUN as a Service® platform. Canadian greenhouse company Allegro Acres has been among the first growers to make use of this system, which not only manages light intensity, but it dynamically calibrates lighting along the full spectrum of the Sun’s natural light.

Earlier, the Sollum Technologies team explained the process for installing their smart LED lighting solution in a large pepper greenhouse for winter production, a Canadian first. "Growers know well that peppers are difficult to cultivate using artificial lighting, even outside the winter season," they share.

Allegro Acres
"We started by working with Allegro Acres and scientists from Agriculture and Agri-Food Canada’s Harrow Research and Development Centre to determine the light recipe best suited to pepper production and the location of the greenhouse. Throughout the growing season, crop registration was done to monitor multiple crop parameters and optimize plant growth by adjusting their lighting accordingly. And it is not just a matter of better taste, size, and appearance, but of crop yield as well."

For an eight-week period during production, far-red was added to the spectrum at different periods of the daily light cycle to increase internode length in the pepper plant. "This prevented the crop morphology from remaining too compact, which would negatively impact fruit development and ease of crop manipulation. With short internodes, it becomes difficult if not impossible for workers to manage the canopy without damaging the crop. Without far-red, a grower cannot stretch internodes as needed," they explain.

"In addition, far-red promotes apical dominance in the crop, which means that the main stem overtakes side shoots and makes it easier for workers to identify which side shoots to pinch off. Far-red also promotes leaf expansion, which reduces canopy density and ensures that developing peppers are sufficiently shaded."

"And as easy as it was to add far-red to the light spectrum, it was just as easily removed once far-red served its purposes to ensure that the crop’s resources were redirected back to fruit development and generative processes." 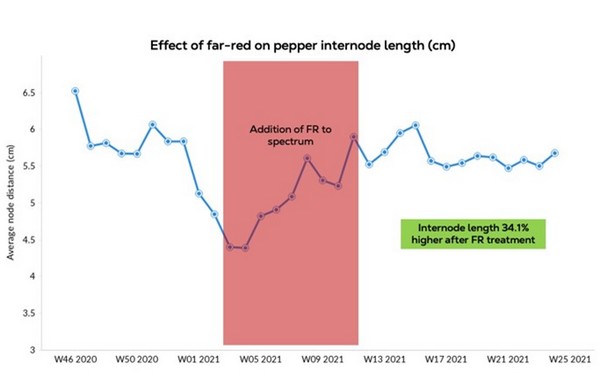 How easy is it to implement and manage changes in the recipe?
According to the Sollum agronomists, it's very easy to implement and manage changes in the recipe. "Most importantly, only one fixture does all the work, just like a gaming console- no extra wires, circuits or equipment needed. Each fixture is a small computer in which the recipe resides, so the recipe is basically modifiable software. Since one fixture can implement an infinite number of recipes, we can program each one individually and create different zones in the same greenhouse to cultivate many varieties of produce."

In the early stages of production at Allegro Acres, for example, a predominantly blue light spectrum was used in one zone. After observing the crop’s development, the light recipe was reviewed and changed to predominantly red about 6 weeks later. "Our user-friendly technology makes it easy to adjust light intensity and spectrum through the SUN as a Service platform."

Opening up new possibilities
Since Sollum’s spectral programmability allows growers to calibrate their light spectrum to include far red when needed, they can effectively cultivate pepper cultivars that have shorter internode characteristics. "That means cultivars that were not viably producible in a greenhouse setting in the past are now fit for production thanks to our lighting solution. And with our multi-zone light management capabilities, a grower can cultivate many cultivars in one greenhouse."

Possibilities
Sollum is working with Agriculture and Agri-Food Canada’s Harrow Research and Development Centre to explore the possibilities of their solution. According to Sollum agronomists: “At Harrow, our lights are being used to evaluate the effect of different photoperiods and light spectra on peppers, all with the goal of maximizing energy efficiency while maintaining crop vigor. We've seen promising results from long photoperiods simply by adjusting the spectrum throughout the day.”

“Through the use of Sollum Technologies’ unique LED lighting solution, growers now have the opportunity to produce a variety of cultivars in one single greenhouse. The future of sustainable agriculture is here and it’s Canadian climate tech entrepreneurs like Sollum, that are making it possible,” said Leah Lawrence, CEO and President of Sustainable Development Technology Canada (SDTC).

"This exploration of the effects of programmable light spectra on commercial pepper production is just getting started and will provide greenhouse growers with new opportunities as research evolves. In the meantime, consumers in Ontario enjoyed this past winter’s locally sourced, winter-produced peppers from Allegro Acres."