Is the watermelon from the greenhouse here to stay? "Who knows?" Grower Lynn Vermeiren and brand manager Tom Verdonck of Tomeco laugh mysteriously.

From week 24 they have been harvesting mini watermelons every week in the greenhouse in Meer. And in Loenhout, the plants for a new crop, planted on 7 July, are ready in the gutter on Friday afternoon, 9 July. The tomato growers have enthusiastically started their voyage of discovery. 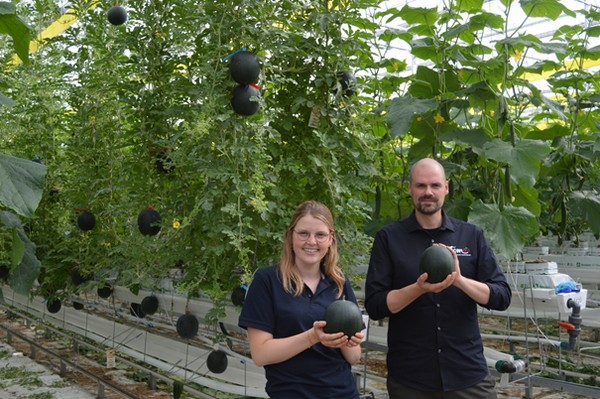 Lynn Vermeiren and Tom Verdonck in the greenhouse with watermelon, but also cucumber and tomato

Enthusiastic
Earlier that afternoon, Tom had already summed up the many advantages of the special cultivation on the high wire, but was interrupted by Lynn. "Don't be overly enthusiastic, otherwise everyone will want to start growing them," she says with a wink. But then more seriously: "There is still a lot of new stuff and even though we are only growing a few rows, the crop requires a lot of labour. Followed shortly thereafter by even more advantages. "The skin is so smooth an even. It's just so beautiful!" 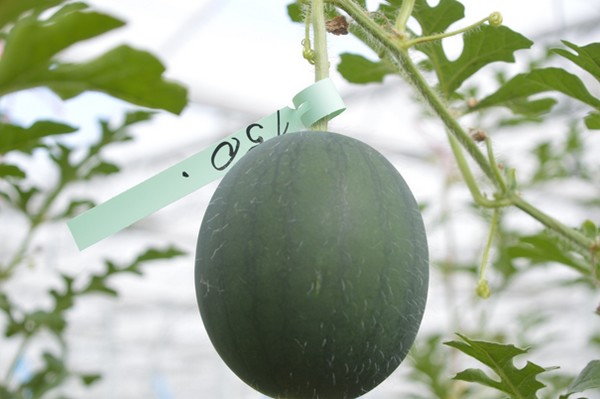 The smooth skin is much appreciated

Testing in three greenhouses
This season VW Maxburg, together with fellow tomato grower De Bakker Westland, is one of the two growers who are trying out greenhouse cultivation of mini watermelons. The growers were approached by the breeding company BASF Vegetable Seeds with the question of whether they would like to test a variety specially adapted for greenhouse cultivation. 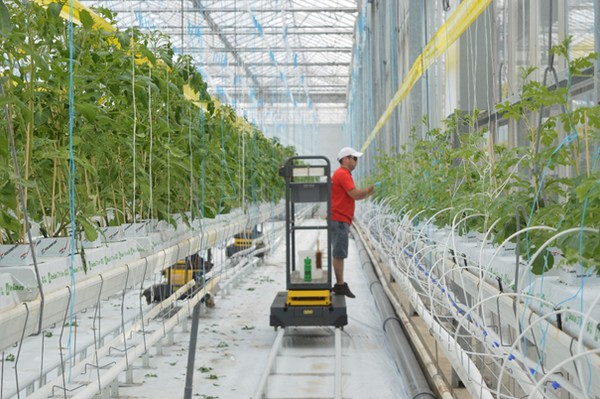 In Loenhout at the VW Tuinderijen location, the new watermelon plants were planted in a greenhouse with tomatoes in week 27. The aim here is to continue cultivation as long as possible with the help of a hybrid lighting system.

They were happy to try this in Meer. The result is that besides the regular tomato specialties, and as of this season also three hectares of cucumber, there are a few rows of watermelon in the greenhouse. And not just in Meer, but also in Loenhout at VW Tuinderijen, while Hortipower, a third Tomeco grower, is also taking the test. 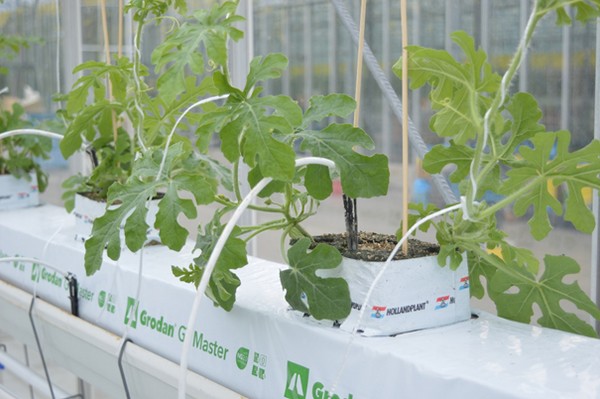 The young watermelon plants are growing on rock wool in a greenhouse oriented towards tomatoes, not specifically towards melons.

Under lights
The current crop in Meer is not the first watermelon crop for the growers. From February to mid-June, tests were carried out with a crop under light. Lynn: "The idea was to see if, together with the use of SON-T, there was enough light in February for the melons, which like a lot of light. It didn't quite work out. "The fifty plants we had were not producing fifty melons every week. The production was disappointing." 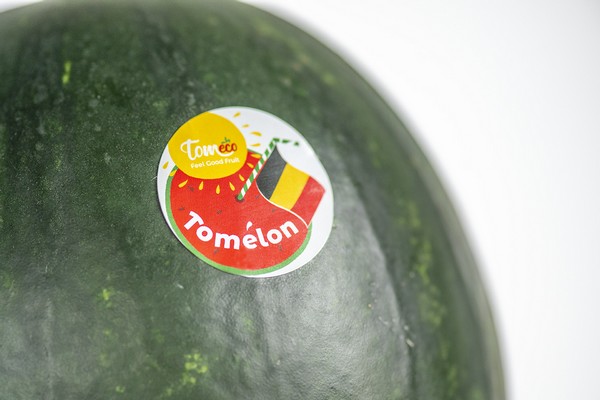 To emphasise the local origin of the watermelon, the fruit has a biodegradable, sticker with the Belgian flag on it

Seeking sales
In the current, second crop, the growers have already improved their mastery. Every week, various trading companies purchase the watermelons from a controlled atmosphere storage at Tomeco via Coöperatie Hoogstraten. Tom: "We are now really busy looking for sales for this new product. In doing so, we consciously focus on the local market. That is a strength, because we can skip the transport from the South."

Tomeco offers the watermelon in three segments. The growers have not (yet) noticed any difference in demand between the segments. 700-1100 grams is premium.

Shelf life
Tomeco offers the Tomélon, the brand name they have given the watermelon, in three segments: 500-700 grams, 700-1100 grams and 1100-1500 grams. Why one fruit grows bigger and heavier is still a mystery to the growers. What is certain is that with a brix of 9.5 the fruits in all sizes are on a par with their southern competitors, while the long shelf life is remarkable. Tom: "Our Tomélon will easily last two weeks at room temperature and a little longer when chilled." 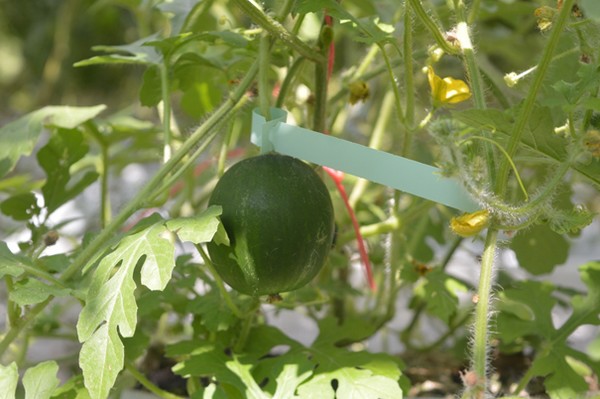 Because the crop is new and estimating ripeness is difficult, the growers label the fruit with colour codes after setting. Red means 'harvest this week'. The labels also have numbers on them, to keep track of the quantity of melons in the greenhouse.

Building up a file
After the first positive reactions from trading companies and consumers, the growers hope to elicit many more reactions in the near future. The step to the supermarket has not (yet) been made. Tom: "In the beginning, we wrote to local independent supermarkets to deliver the first shipments of melons personally, as a little bonus. At the same time, fruit and vegetable specialists were also contacted. However, they immediately took the bulk of the harvest, so things went slightly differently than planned."

They don't regret this. In fact, Tom is very happy with how things are going now. "We may not be able to deliver the melons ourselves, but in terms of building up a file with feedback, the way things are going now can count for something. With feedback from a wider audience than we first hoped for, we can make a more informed decision to scale up and approach retail." 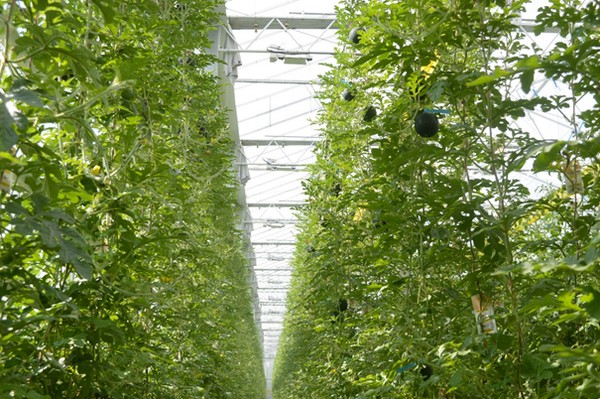 Once the plant grows over the wire, ripe melons can be found from the bottom to the top of the crop.

Stable supply
But until then, it is all about learning and discovering new things. Lynn: "We are aiming for a weekly stable delivery to the customers we have now. With the irregular setting of the plant, that is quite a challenge. Especially when the plant grows over the wire, side shoots and therefore fruits appear everywhere. That makes harvesting difficult." 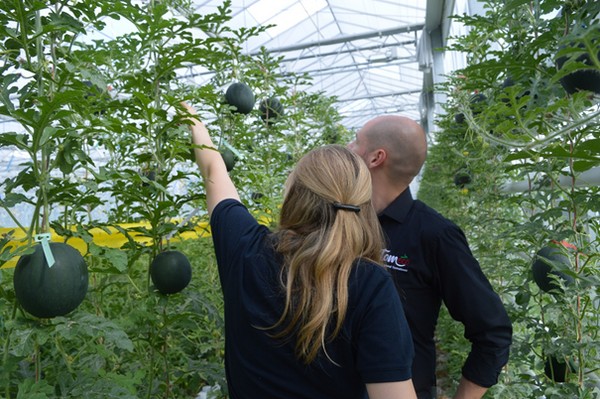 The growers still marvel at the new crop in the greenhouse every day.

But once on the pipe rail trolley between the plants, the difficulties are soon forgotten. And there is a great temptation to cut open such a handy watermelon immediately after harvesting and eat it. "At this size it is easy to eat the whole fruit at once and so there is no waste. Another advantage," concludes Tom, laughing. 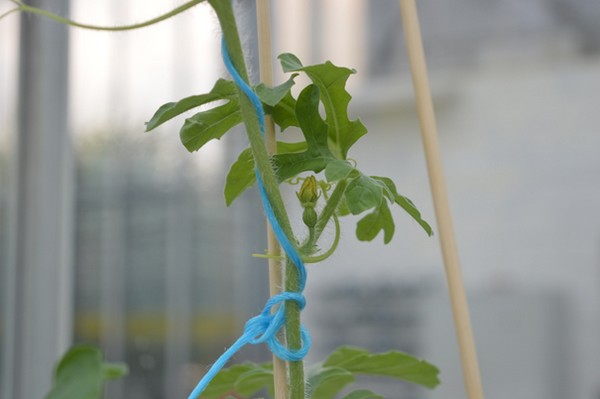 At the VW Tuinderijen location, the first very small melons could already be seen in the young plants. It can still happen that the plant aborts the small fruits. 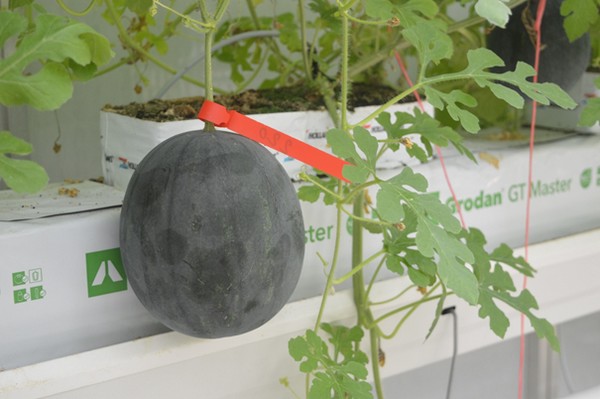 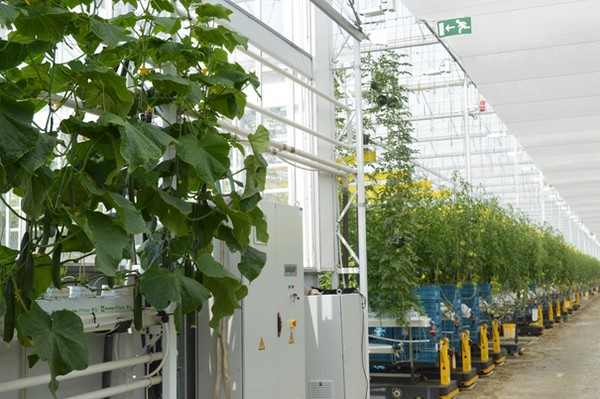 In one greenhouse, cucumber, watermelon and tomato. 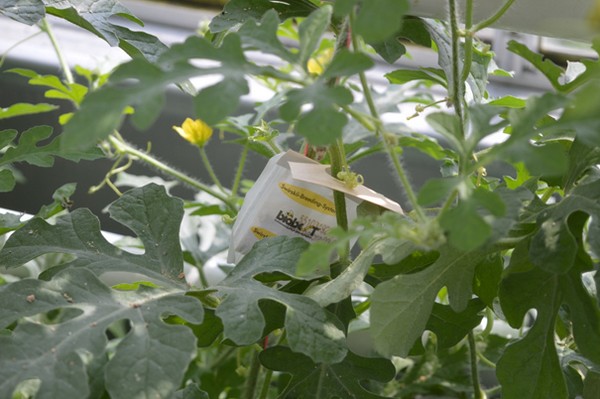 The predatory mite Swirskii is introduced in the cultivation of watermelons. 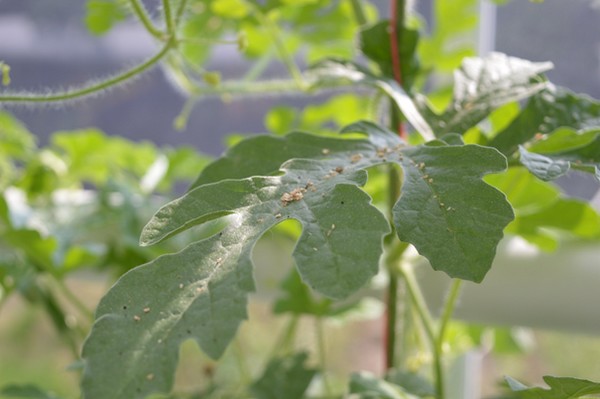 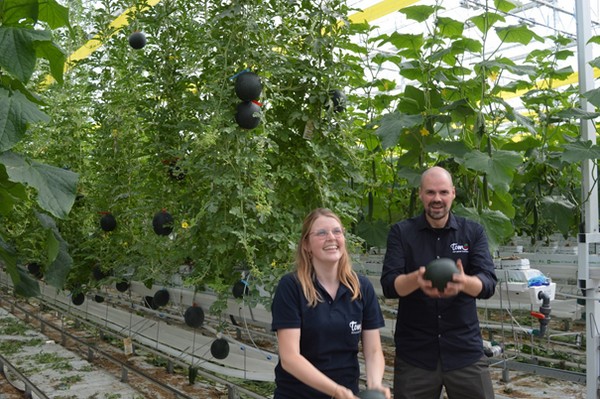 Miraculously, the crop holds the heavy fruit well. Of course, you can throw them around ... 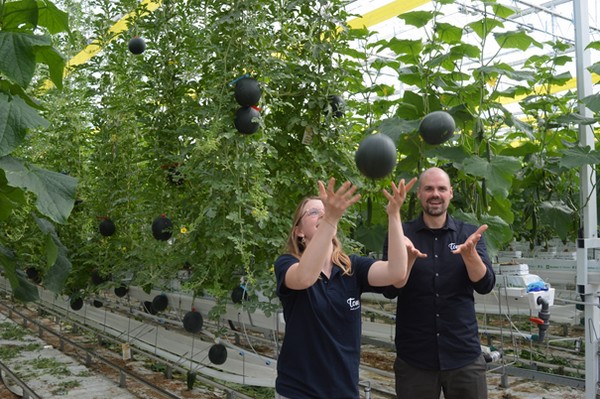 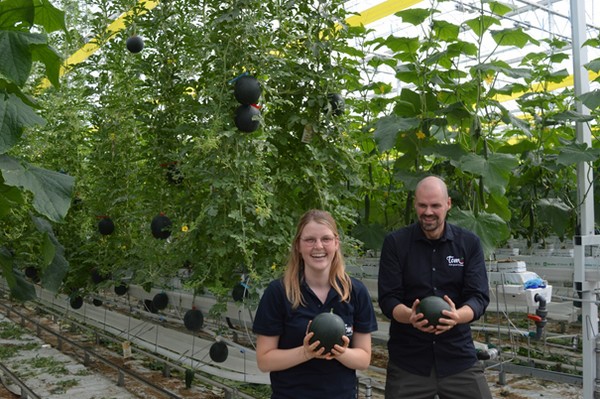