"Once the useful cycle of Almeria greenhouses has been completed, the plastic needed to operate the greenhouses has become a major problem. The lack of an effective inorganic waste management system has caused the countryside and wadis surrounding the greenhouses to become open-air dumps, where tons of plastics pile up uncontrollably," shares documentary maker Rocco Muraro.

The documentary Rocco directed, #TierraSeca is a journalistic journey through the Iberian Peninsula. The episode "Wrapped in Plastic" (Envueltos en plástico), which exposes the issue of plastic waste generated by intensive agricultural practices in southern Spain, has been nominated for an IFAD COPEAM Film Award.

Greenhouse acreage
"Almeria is one of the most important agricultural areas in Europe. Thanks to greenhouses, a technical revolution began in the late 1970s that transformed the surrounding desert into a vegetable garden. Four decades later, the economic development of the area has been consolidated but, at the same time, social and environmental problems have emerged," Rocco says. "The image of the shreds of plastics at the mercy of the wind that end up enveloping and suffocating the plants in the Almeria desert is very graphic. But the worst does not happen before our eyes. The action of the sun gradually breaks down the plastic into increasingly tiny particles. Microplastics and nanoplastics end up mixed in the soil, becoming part of the local biome, thus entering the food chain."

"The discovery in 2020, by a group of Italian scientists, that nanoplastics are absorbed by cultivated plants through their roots and end up in the vegetables produced, raises the prospect that the presence of plastics in cultivated soils will be a public health problem."

Award
With his episode, he's nominated for an award. The award was created by the UN’s International Fund for Agricultural Development (IFAD) with the Union of Mediterranean Broadcasters (COPEAM), to celebrate the best short documentary films that focus on food security and issues that affect rural communities in the Mediterranean and Near East, North Africa, Europe and Central Asia regions.

The Sicily Movie Festival is held in the Valley of the Temples in Agrigento, Sicily.  The festival will screen all types of short films, documentaries, video clips and animation shorts between 22 and 25 July. 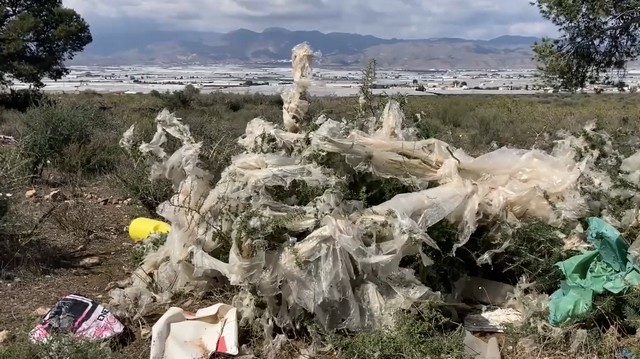 There is another episode in which Rocco focuses on the horticultural industry. The episode "Under the weight of plastic" ('Envueltos en plástico') also takes place nearby the greenhouses.

"Around 4,000 people live in shantytowns in the countryside of Almeria, next to greenhouses where vegetables are grown and exported to several European countries. In these shanty towns live mostly undocumented immigrants, whose legal status leaves them stranded in the agricultural labor market," shares documentary maker Rocco Muraro. "In addition to the difficulties in finding work, when they do find work, it is carried out under severely exploitative conditions."