"In France, not even a handful of growers cultivates peppers"

Until February, the newest greenhouse of the Vandevelde family in Zedelgem had tomatoes under lighting. They were one of the first in Belgium to do so. In mid-May, the tomatoes in West Flanders were swapped for young pepper plants in all colors. They hope to be among the first to do so too, in France that is. There the tomato growers already have a tomato greenhouse in which they also want to grow peppers in the coming years. Henk Vandevelde of Delipa, the name of the new cultivation company, talks about the how and why of this step. 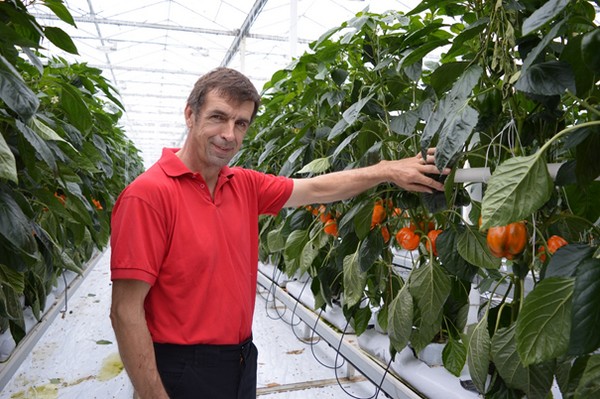 Gap in the French market
The history of the family business goes back to 1986. That is when they started growing tomatoes. In 2006, loose tomatoes were added to a new greenhouse and in 2010 they started with cultivation under the light. Henk now grows tomatoes together with his son Kevin in both West Flanders and France. About an hour's drive from Zedelgem, a greenhouse was built in northern France where Kevin has been growing tomatoes since 2018.

"In France, we have regular customers whom we supply via REO Veiling," says Henk. "We have built up a good relationship with them. When it turned out that they were also interested in peppers, a light bulb went on in our house and Kevin and his wife Lies set up Delipa." In France, the cultivated area of peppers is still very small. "Not even a handful of growers cultivate sweet peppers under glass there. That is why we see opportunities, but taking the step to fill a large greenhouse with peppers in France at once was too big for us. That is why growing the first crop here in Belgium seemed better to us."

Thursday 20 May the pepper plants on perlite looked like this. Left red, right orange

Late start on high gutters
The pepper plants were planted in Zedelgem in mid-March, on perlite. For a bell pepper cultivator, this is a 'very late start', as Henk knows. "After six weeks we had our first harvest. That was faster than expected."

So fast, in fact, that the switch by the organization to growing peppers, which is different from growing tomatoes, had not yet been fully completed. That is why in mid-May the final touches were made, for processing the harvest for example. It is also noticeable that the cultivation is on high gutters. "In this new greenhouse we have space to grow height-wise and we had to make some adjustments to lower the gutters. We will therefore do that next year." 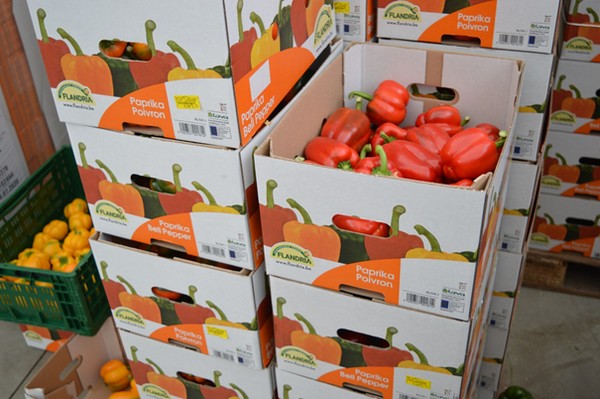 The peppers go to customers via REO Auction in 5-kilo packs. The growers do not (yet) flow pack peppers.

Perlite
The first colored fruits were harvested in week 19. To help the tomato growers with their first pepper crop, they are accompanied by two cultivation advisors with pepper experience "Everything is new. We had a little too much fruit on the plant, partially due to the quick start. That is why the sizes were a bit disappointing at the first harvest. The crop is now more balanced.

Apart from the already remarkable step taken by the tomato growers, the choice of perlite is also striking. Perlite is not yet common practice, especially in sweet pepper cultivation, as Kurt Lauwers of Willems Perlite knows. "But we hope to change that, especially now that we also supply perlite in a finer fraction in slabs. Moreover, due to the high virus pressure in tomatoes and the popularity of peppers, including for consumption, I see the demand increasing." 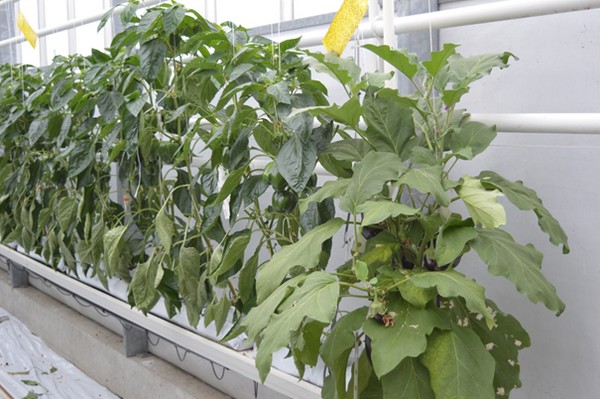 By coincidence, one aubergine plant was also delivered. It now serves as a good host and therefore signaling plant for pests and diseases in the greenhouse.

In Zedelgem, the choice of peppers was not an obvious one either. "Our two advisers had a preference for rock wool themselves, but in consultation with Kurt we decided to do it on perlite. And so far we are satisfied." 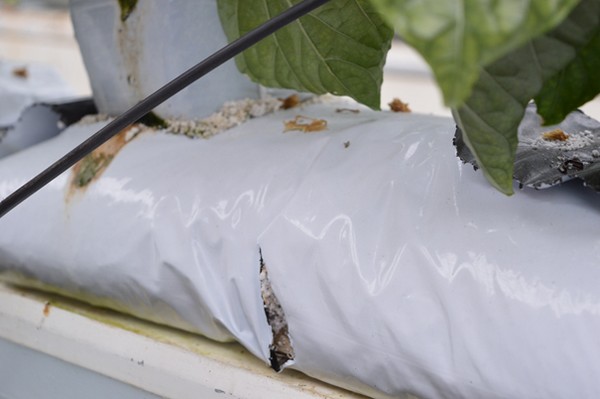 A cut was made in the mat for drainage

Not too wet
The first roots emerged from the slabs in mid-May. That's one of the reasons the growers made a cut in the slab for the drain. On top of the mats with pure perlite are pots with a mix of coconut and perlite. On the advice of the plant breeder, ten percent coconut was put in the pot with ninety percent perlite. Pots with one hundred percent perlite are also being tested. In both cases, the drip pins are placed next to the pot to prevent the pots from getting too wet. 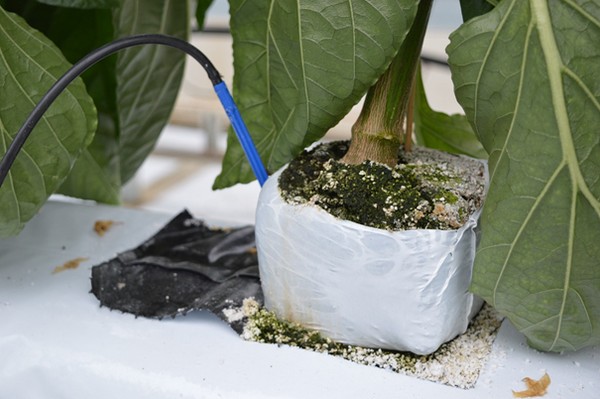 The drip pan is removed from the pot during cultivation and placed directly in the slab.

Slightly illuminated
Because of the late start, the cultivation in the greenhouse is, according to Henk, 'almost a cultivation under light'. Next season, the intention is to actually start using lights. The lamps in what used to be a tomato greenhouse are already there. "That is why we will be using them, but otherwise we would not be buying them specifically for this purpose." Planting is planned when the crop rotation is underway in France. Then, in early January, the tomato plants can be moved into the greenhouse there. And if all goes according to plan, the growers hope to be able to grow peppers in a new greenhouse in France next in 2024.