"Blueberry pests are detrimental to production and require more research"

Native to North America, blueberries are the most recently commercially domesticated fruit in the U.S. Just a little over a century ago researchers began studying this wild berry with an intent to develop improved varieties for commercial cultivation.

Fast forward 100 years and the U.S. is now the world’s largest producer of this “superfood,” with Georgia ranking No. 1 in acreage planted. Originally selected as a replacement crop for tobacco, Georgia blueberries bring in more than $220 million annually to the state’s economy. As one of the state’s most economically important crops, the research demands of this lucrative berry are more critical now than ever. 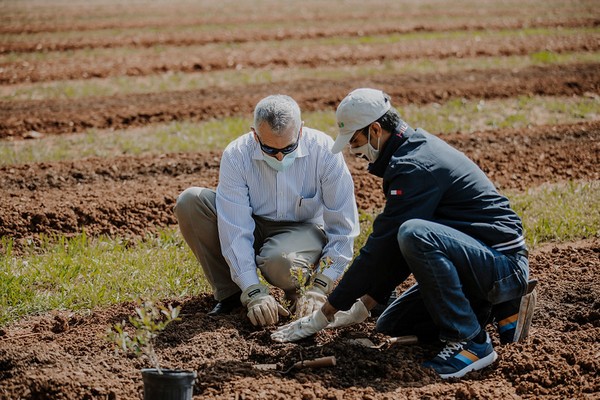 On April 26, University of Georgia College of Agricultural and Environmental Sciences Dean and Director Nick Place formally inaugurated the newly established blueberry orchard at the UGA Durham Horticulture Farm in Watkinsville, Georgia — a mere 10-minute drive from the main Athens campus. Place planted the first blueberry bush to honor the potential that this new research orchard provides for meeting the needs of our state’s blueberry producers. “This is a huge step toward increasing our ability to provide robust, timely, science-based solutions to our blueberry growers,” said UGA blueberry entomologist Ashfaq Sial, who is based on the UGA Athens campus. 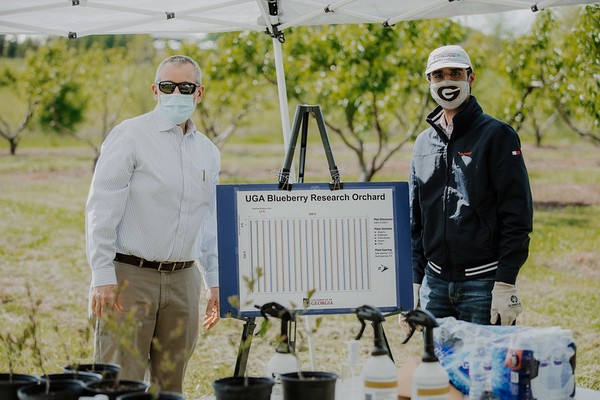 The newly planted orchard contains 1,000 new bushes of five rabbiteye cultivars that were selected based on recommendations by UGA blueberry breeder Scott Nesmith. These varieties have characteristics that make them more suitable to the Piedmont region of the state and include the cultivars 'Alapaha', 'Brightwell', 'Ochlockonee', 'Krewer' and 'Titan'.

Pests
Sial explained that, by far, the most economically damaging issue for blueberry growers is caused by the spotted wing drosophila (SWD). “This pest is more problematic and costly than any pathogen or any other financial input required to grow blueberries — in other words, this tiny fruit fly is the most detrimental issue in blueberry production and therefore requires a great deal of time and effort to thoroughly research,” Sial emphasized.

Historically, all of UGA’s blueberry research has taken place in southeast Georgia, where most of the state’s blueberries are grown. However, over the past decade, blueberry production has expanded into other parts of the state, with various varieties faring better in more northern climates.

“This new orchard will allow graduate students to conduct more in-depth studies without having to travel several hours away from campus while they are taking classes in Athens,” explained Sial. “Furthermore, having a research orchard at the Hort Farm will help us conduct experiments that require more manipulation of the plants without regard to the economic loss of the crop.”

While new studies will begin taking place at the orchard in Watkinsville, Sial and his team will continue the applied aspects of their research in the major blueberry-producing counties in south Georgia where research has historically been conducted.

Sial hopes the new orchard will bolster interdisciplinary research efforts that will ultimately help blueberry producers address the various issues they face. “This is the first-ever sizable blueberry orchard near the Athens campus that will be available to all UGA researchers. The goal is to conduct research that will help us develop sustainable solutions to problems facing blueberry production in Georgia for many years to come,” said Sial.