Bas Lagerwerf advocates for an 'ASML with green fingers'

"Carts? There's Formula 1 technology in there"

An example: greenhouse builders often referred to "carts" when it came to the products of service providers. "Carts?" Bas reacted. “There's Formula 1 technology in there! When braking, energy is returned to the batteries. So at the very least it is a car. "

In this way Bas brought the product more and more into the picture. “That went from cart to car, from car to concept, and now, with Hortilogics, we are working together with a number of other companies on a total concept. Because if you want to stay afloat in the market as Dutch parties, you will also have to work together. " 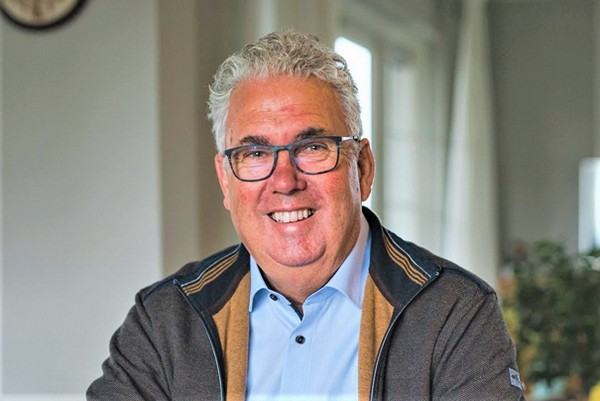 Getting started with data
About six or seven years ago Berg realised that there would be more competition in the mechanical field. “This meant it would be good to start working with data. With my automation background I had some thoughts about that. "

A consortium was then set up in collaboration with a number of parties - unfortunately that collaboration ended, but Bas did not give up. He learned a lot from it. "You only lose if you have not learned anything, we have learned a lot and we have continued to do so. Together with Andreas Hofland from HortiKey, we took another critical look at the whole thing."

The ideas were good, so they just kept going. In the end, they brought together all the data that Berg was able to collect from their position close to the crop, into a new product: the Plantalyzer. That process took a lot of blood, sweat and tears, but it is something that Bas can be proud of - a commercial data-driven product that is now being sold.

“Now the AGV has even become a universal platform, on which a UV lamp or a robot can be placed. We have distinctly made the choice to always stay close to logistics, because that is where our core competence lies. We now focus on the harvest forecast, the Plantalyzer is defining in that.

Other parties are further when it comes to disease pressure. If possible, we like to work with them - if we can't, we'll do it ourselves. With the enormous development club that we met with the establishment of Hortilogics, we are also able to do that. " 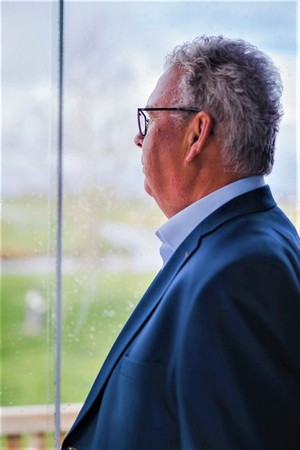 Bas's urge to collaborate stems from the desire to keep and cluster the unique knowledge that Dutch companies have together in the Netherlands. Family businesses or companies that behave like this are best suited for this. At the moment there are private equity organisations active that, under pressure from their shareholders, want to quickly monetise a company and then sell it again.

The family businesses are less sensitive to money and opt for a longer-term strategy. "If these are kept clustered, we have a lot of knowledge in the Netherlands and the knowledge will not be fragmented."

It is a choice to cluster and enter into partnerships, joint ventures, etc. and to invest that money in innovations, says Bas. "We should therefore also think bigger with innovations. Hortilogics is an example of this."

Together you are stronger - that was also a consideration in the sale of Berg Hortimotive to Royal Brinkman. “It's a great family business, and they are also very advanced in e-commerce. We have a lot of information from the customer. Royal Brinkman has a clear vision of data-driven cultivation. It has been a good choice and we would do it again. "

As far as Bas is concerned, this spirit of cooperation is imitated throughout the Netherlands. "It would be nice if family businesses could have a cup of tea with each other from time to time, to discuss, for example, how we can all build an ASML-like something for horticulture. There are many roads that lead to Rome. lead - think of Atrium Agri, a good example of cluster formation in horticulture, which is how we ensure that the valuable knowledge does not flow away from the Netherlands.”

Tough
Since 2007, Bas has been working hard at Berg Hortimotive, with weeks of 60 to 70 hours. In 2016 Bas was took a heart attack, and he made the decision to take it a bit easier. Nico Bikker joined on an interim basis and now the succession is also a fact: Marco van der Velden became the new general manager last year.

For Bas and silent partner Philip de Koning, this was a good moment to hand over the baton to a new generation, because, as Bas says: “The best is yet to come. We are now entering into a combination of technology and people, and I know that soon we will also be able to control a greenhouse remotely. And so we will make autonomous cultivation possible."

The Berg Hortimotive wagons can play a key role in this, says Bas. “We drive past the crop every day, so to speak, and can immediately identify what is happening with the crop. For example, we can signal the effect of a change in cultivation. We are therefore approached from all over the world - so I am handing the company over to Marco, knowing that there is still a lot of potential. ”

Foreign experiences, weak knees
Since Bas, together with Philip, took over the company from Arie van den Berg together, he has of course experienced a lot. Various trade missions, for example, were an excellent way for Bas to move the company up the "ladder of attention", and to get to know the industry better himself. "If you drive around with someone in a van for a week, you build a bond."

One of those trade missions brought Bas to Turkey - that is also where the first orders for the company from Turkey came from. “That was towards the Syrian border, I don't think you're even allowed to go there now. We sold automation there, but it was actually much too early, because those people couldn't handle an AGV. So we went there to offer help but no one there who spoke English. And they also had no internet connection.

“Now I have hardly ever been afraid... but how can I put it, there were some locals of very large stature. There was one very big gentleman. He was raging, but I couldn't understand a word of it. They didn't seem like words of welcome to me, so I say to my buddy, "I'll stand up too." So I started ranting in Dutch that he had made a mess of it and all that - in the meantime I had made sure where the door was, I was standing there with weak knees. But somehow the ice was broken, we had dinner in the evening and he showed us his lands. And later bought from us again." 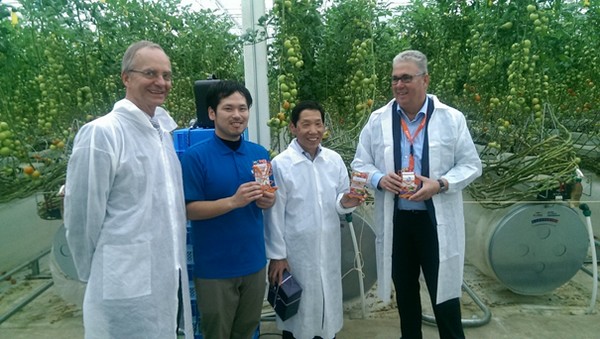 Foreign visits - Minister Henk Kamp in Japan
Bas also once went on a trade mission to Japan, which was also attended by then Minister of Economic Affairs, Henk Kamp. The minister had to give a presentation. “He asked me to tell him something about internal logistics that he could use in his presentation. My story was way too long, so if I could, would I explain it in two sentences? Fine, I said: Instead of walking, they have to drive, and instead of on their back, the harvest should be on a wagon.

Many Japanese were present at the speech of Kamp that followed. "Did I say it right?" the minister asked after his story. Bas means that those people are very approachable.

Bas is firmly convinced that companies that are new to the industry can learn a lot from these trade missions. “It taught me what other cultures entail - a handshake doesn't mean an assignment, and neither does a down payment. You learn that through damage and disgrace, but also on the bus from colleagues from horticulture. It also makes you personally richer to understand more about other cultures."

Foreign visits Mexico - Tequila
Another juicy story comes from Mexico. That journey started with a three-hour delay at Schiphol, and ended with an expired bus ticket in Mexico, which meant that Bas was on the road for 28 hours. “In the evening I should have been in the hotel at ten o'clock, instead it was the next morning at seven o'clock. I took a shower, drank a lot of coffee, did not dare to go to sleep and then we started a new day there.”

During the four-hour taxi ride, Bas was able to catch up on some sleep as best he could. After some customer visits, the team wanted to take a look at the exhibition floor - it was now eleven o'clock in the evening. “Then we still had to drink something - what's that drink called again? Tequila! We had one or two glasses, I don't recall, but it was at least one too many. Back at the hotel, I had set my phone as loud as possible and asked my colleague to call me the next morning. I later heard that they were banging on the door and that the phone was ringing, and that I eventually woke up after a long time.”

Bas spent a day on the exhibition floor running on adrenaline, but it was one of his most tiring trips. "But also instructive: you really have to make sure that you are well rested at the start, because there are always very long days afterwards."

The text continues after the photos 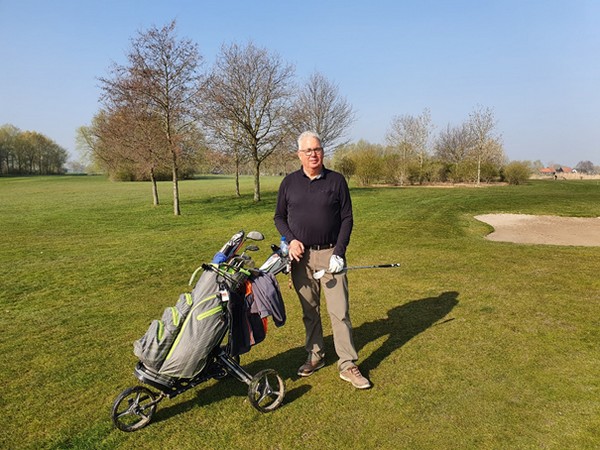 Bas likes to play ball between the companies and…. 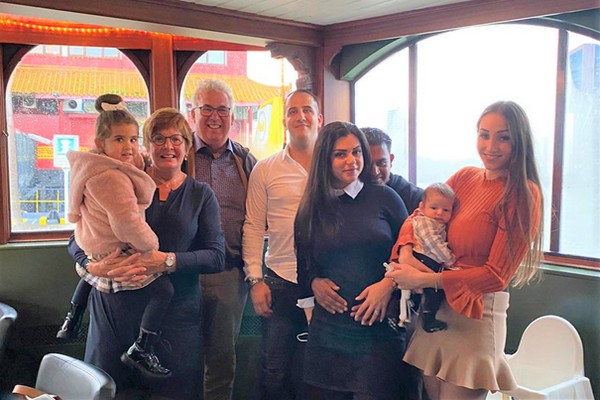 ... Bas enjoys being with his beautiful family

Continuing to think along and connect
What is Bas going to do now? “Marco is completely in the right place. I can still do a few things at Berg Hortimotive and Royal Brinkman, but in the end it is not good to get in the way of people or to be a smart Alec. So from the turn of the year I only worked 1 or 2 days, and handed everything over as well as possible.” On April 23, Bas said his official goodbye.

Bas will advise companies from his own company on cooperation and the development of a vision. “I would like to share my experiences with several companies, and I would find it even more wonderful if the larger companies seek each other out to become stronger together and put the Netherlands and the knowledge acquired on the map. And in order to remain in control and to form strong clusters and in this way make the industry and export even more professional and grow. "