Report "prohibition on patenting conventional breeding" is being circumvented in Germany

No Patents on Seeds! is today handing over a new report on patent applications for conventionally bred plants to the German Ministry of Justice in Berlin. The organisation calls on the German Minister of Justice, Christine Lambrecht, to take measures against the patenting of plants and animals - as announced in the coalition agreement. The report aims to provide an overview of patent applications on conventionally bred plants that were published in 2020, and which could be granted by the European Patent Office (EPO) in the next few years. 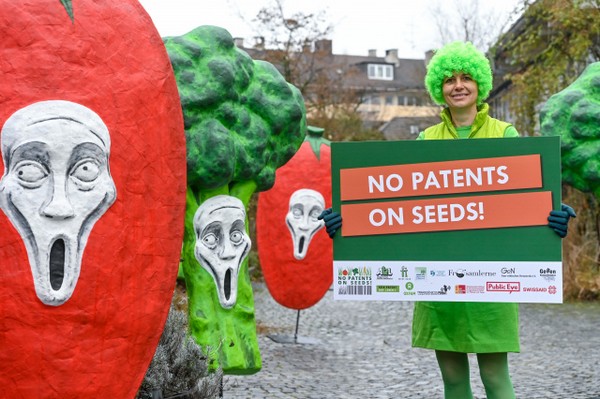 The report argues that large corporations such as BASF, Bayer-Monsanto, DowDupont (Corteva), Syngenta, as well as companies such as KWS, are trying to exploit the existing legal loopholes in European patent law to obtain patents on conventionally bred plants and animals. In the patent applications, the boundaries between conventional breeding and genetic engineering interventions are systematically blurred, the report states. Thus, patents granted on genetically modified plants (or animals) can be extended to cover plants and animals that have comparable breeding characteristics, but originate from conventional breeding, the organisation observes.

"The examination of patent applications must not be left to the EPO. Politicians need to ensure clear rules to guarantee compliance with the existing prohibitions. The German government has only a few months left to ensure more legal clarity in accordance with the text of the coalition treaty," says Matthias Juhas from the Gen-ethical Network. “Patents on conventionally bred plants and animals have to be stopped now.”

Patents on conventionally bred plants and animals are prohibited in Europe. A specific regulation was confirmed in 2020 by the Enlarged Board of Appeal, the highest legal authority of the EPO. There are however significant problems in the implementation of these bans: in current practice, even plants with random genetic modifications are considered patentable inventions. There are already numerous examples showing how legal loopholes have been used to grant patents on barley, beer, melons, and even conventionally bred lettuce, the report claims.

"About 100 patent applications on conventional breeding are added every year. In Europe, more than 800 varieties are already affected by such patents. If these patents are not stopped, there will be serious consequences for breeding, agriculture and consumers. Patent holders can control and hinder access to the plants needed for further breeding. Politicians must take action to prevent such risks to the future of our food," says Christoph Then for No Patents on Seeds!

"The current problems are rooted in policy: in 2017, the Administrative Council of the European Patent Office, which represents the 38 member states of the EPO, adopted a document (CA/56/17) on the legal interpretation of the existing prohibitions which makes no differentiation between random mutations and genetic engineering techniques. Citing this document, the EPO has already granted over a dozen patents in recent years, including on barley and on beer. No Patents on Seeds! therefore demands that the Administrative Council, in which the German Government is represented by the Ministry of Justice, revises this document in order to provide sufficient legal clarity. As long as legal clarity is lacking, a moratorium should be imposed to prevent the EPO from granting further controversial patents on plant and animal breeding," they announce.

Source: No patents on seeds.