Technion researchers have developed an innovative technology for the automated monitoring of stress in agricultural crops. Early detection of water and heat stress is crucial for agricultural growers since the reduction in moisture is reflected in limited stomatal conductance, resulting in dwindled growth and eventually to the plant’s premature death. The development was led by the people of GIP, the Geometric Image Processing Laboratory, in the Henry and Marilyn Taub Faculty of Computer Science. 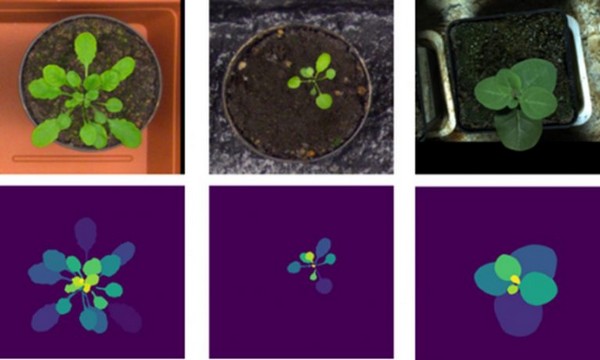 The Technion researchers – research assistant Alon Zvirin, head of the GIP lab Professor Ron Kimmel, and chief engineer Yaron Honen – have developed smart technology for the monitoring and prediction of crop stress and leaf segmentation. In the context of the former, Zvirin explains: “The detection of drought stress enables the plant to be saved, allows for the identification of diseases and the prediction of crop yield quantities, all of which are crucial information for the grower.” Through the use of color photographs, thermal imaging and deep learning, the researchers were able to predict stress and new leaf development with great success; in a test of the technology on banana seedlings, an impressive prediction level of over 90% accuracy was achieved. In the context of the latter – leaf segmentation – the researchers achieved unprecedented results in the identification of Arabidopsis and tobacco leaves by applying deep learning. To train the system on a large quantity of samples, the research team developed a vast database containing artificial leaf images, and then also tested the technology on other crops – avocado, bananas, cucumbers and maize.

Young researchers
According to Zvirin, “We included young researchers who were just starting out in the technology development process. They brought excellent ideas and did a great job. Two of them are also listed as lead authors of the articles: Dmitri Kuznichov, who will shortly be completing his master’s degree under the supervision of Prof. Irad Yavneh and Prof. Ron Kimmel, and Sagi Levanon – a graduate of the Psagot Excellence Program, who has started studying for his second degree in the Faculty.” The article on stress detection was published at the European Conference on Computer Vision, ECCV, and the paper on segmentation was published at the Conference on Computer Vision and Pattern Recognition, CVPR.