UK: Increased need for heat protection on isle of Wight

Isle of Wight has an ideal tomato growing climate. However, the summers here are also becoming more extreme. APS Produce has successfully used the diffuse heat-reflecting ReduFuse IR coating for its sensitive varieties and organic tomatoes.

A. Pearson & Sons is the largest local supplier of tomatoes for the British market. The company has 70 hectares, across five locations in southern, central and northern UK, for its own production. In addition, it imports from the Netherlands, Spain, Morocco and Poland. "We have consciously located the packing stations of the APS Group away from the production sites. If the import should ever inadvertently bring in something undesirable, then it can’t contaminate our own crop as well," says Brian Moralee. He is Growing Manager at APS Produce on the Isle of Wight, which at 26 hectares is the company’s largest production site.

"We grow a full range of tomatoes from beefs to cherry types, with the emphasis on taste. Every year we try out at least a hundred new varieties. We are very active in this area. “The golden thread” that always runs through all of our activities is high quality, good taste, sustainability and respect for the environment," he says.

ReduFuse IR
Aside from the usual crops, the company also has six hectares of organic crops. "This is where we are most successful with ReduFuse IR. To qualify for the organic label, crops must be grown in soil and there are always spots that are somewhat drier or wetter. ReduFuse IR helps create a more uniform greenhouse climate and reflects heat. We are observing better quality and, after the hot July and August months, better production," he says.

The sensitive common varieties, such as the tasty beef tomatoes and the San Marzano varieties are also protected using ReduFuse IR. They are easily affected by blossom-end rot when the weather is hot and dry. The coating damps the extremes.

"APS Produce has decided to use ReduHeat for the beef tomatoes. This has enabled APS to significantly reduce yellow shoulders," says Moralee. Yellow shoulder is a slowdown of the tomato’s colouring at the top of the fruit due to a growing disorder. While the variety plays an important role here, the disorder arises at excessively high temperatures. ReduHeat helps to prevent this. 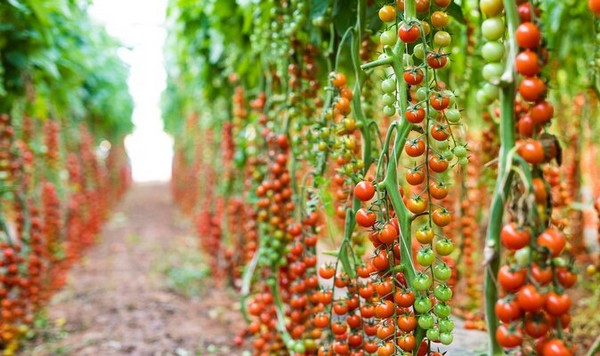 Increasingly hotter
Moralee notes that the need for damping excessively high temperatures is increasing. "Isle of Wight always had a very stable climate. However, in recent years the summers have become increasingly more severe. We are now seeing temperatures up to 35°C. At these temperatures, fruit setting in tomatoes is a real problem and the quality of the fruit and vines declines. We are increasingly coming across vines that have red and bright green fruits at the same time."

"In the past we tried the ReduFuse diffuse coating. We thought that a better distribution of light would result in a higher yield. But it quickly turned out that heat reduction is also an important requirement for sensitive varieties and crops. This is why ReduFuse IR is our preferred coating."

Aside from this, the company also uses an energy screen. In the past it was not only used to screen energy, but also to prevent light and heat damage in the summer. "Because of ReduFuse IR, this is no longer necessary. We still use the screen in greenhouses without a coating however. This reduces the light and keeps the moisture inside, but it causes the temperature below the screen to rise. As a result, we have to leave the screen open a bit, which in turn causes an uneven climate in the greenhouse. We have not yet discovered the most effective strategy for this," he says.

Trials
In 2021, the organic crops and the sensitive beef tomatoes will once again be protected using ReduFuse IR. "In addition, we are going to conduct trials to assess whether we can use this coating to improve fruit setting for other varieties such as cherry tomatoes and baby plum tomato varieties. If we are able to improve fruit setting, this would be a major benefit."

Finally, Moralee emphasises that the company is not focused on maximising production, but on quality, taste and sustainability. "We are constantly looking for innovations. For example, we are no longer using plastic rope because we compost the crop residues ourselves. We make efficient use of energy by making use of 4 CHPs and give due consideration to our environment. The fact that we see red squirrels running around is proof that we are doing it right."