Harvesting strawberries every day of the year in LED greenhouse

This year, Dutch Berries invested in the build of four hectares of greenhouse with full LED lighting. With that, the large strawberry grower from Zuilichem, Netherlands is able to produce large volumes of a fresh, new species for the market. By growing an increasing amount of varieties as well, year round cultivation gets very close. Just in the period of half of February to the beginning of March no production is done.

In the beginning of December, the first fruits were picked from the newest large investment. It started with ounces, but around Christmas that was up to a kilogram per square meter, calculates Boudewijn van der Wal with Dutch Berries. "For our four hectares of full-LED lighted cultivation in the new greenhouse, that comes down to forty thousand kilograms of strawberries per week. The consumer can get these strawberries now in winter in the supermarket shelf. And we sincerely hope that, if Corona allows it, the food service will buy this premium product as well, using it in preparing their meals." 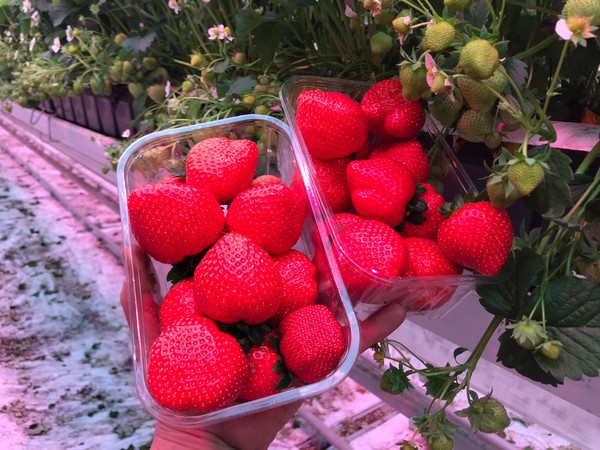 The first Sonata strawberries of 2020 under light.

Gutters in the pathways
When Dutch Berries opened the first 20 hectares of greenhouse in Fall of 2018, there was no sign of lighting, except the 'bulbs' with far red light for the stretching of the plants. There weren't as much varieties grown as there are now, too. "We've learned a lot in the past two years," says Boudewijn, while walking through the greenhouses video calling, at the end of November. "About the climate in the greenhouse, for instance. We've since installed gutters in the pathways too. We chose to do this when we were making gutters for the new greenhouse this summer. The gutters can go up and down. The pro of that is, apart from the extra production, that the climate evens out. That is beneficial for the production." 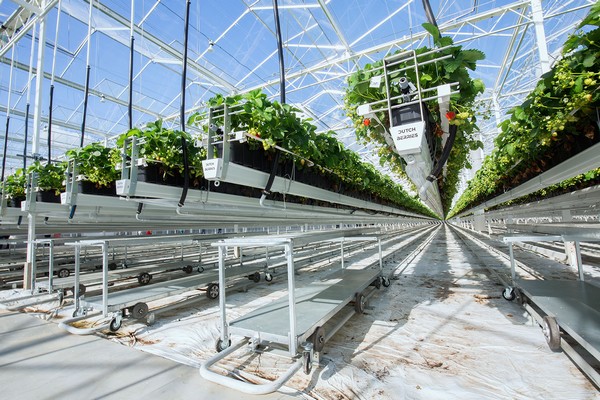 Strawberries on gutters. Even in the pathways are gutters, that can go up and down. Next to more production that yields a more even climate, which is good for the plant.

Every greenhouse a different variety
Eventually, a more even production in the greenhouse also benefits the total production. To ensure that, Dutch Berries has started growing various varieties side by side this year, so varieties don't double in peak productions as much. "In the first ten hectares of greenhouse, we grow Elsanta. This is our main cultivation, pretty traditional in production from about early September to the middle of December, and then from early April to the end of May."

And then there's the newest greenhouse, where the lights are now on above the variety Sonata. "This variety performs well in an early winter cultivation with production from early December to the middle of February. In the summer, we grow Furore in this greenhouse."

Less peaks
While this is the first year that Dutch Berries grows this combination of varieties, the complete schedule is locked inside Boudewijn's head. The choice wasn't made very long ago. "We looked at both growing on racks in summer as at winter cultivation in a greenhouse. The first option is cheaper in terms of investment, but yields production in a period where the outside cultivations in the Netherlands also yield fine productions.

That's different in winter, when there's mostly import produce on the market. We are able to counter this with Dutch premium products, produced in a lighted cultivation. Buyers have expressed there interest. For us, it helps us bind a steady group of employees, because we're almost continuously in production. That means that we can eventually harvest more weeks with fewer people. Also because we work with multiple varieties, resulting in less peaks and a lesser need to train new people for short peak periods."

For the growers, with all the new developments it's important to make good projections of the productions, so that buyers know what to count on. "Like when we started here two years ago: together with Veiling Zaltbommel (the auctioner) we went to market with this new plan. The sales go via the auction. We don't have our own sales department, although we do have close contact with buyers of course, for instance about projections."

Certainty
The strawberries from Dutch Berries are consumed worldwide, with large buyers the Netherlands, Germany, Great Britain, Denmark, Norway, Sweden and Japan. "They make really beautiful cakes with them, there," says Boudewijn when he passes by a crate of strawberries with destiny Japan. "I'll send you some pictures."

From the lighted cultivation, Boudewijn expects a large portion to stay in the Netherlands. "For supermarkets it's a unique chance for a premium product from the Netherlands with a very good taste and a high brix. But there's also serious interest from our export markets. What helps is that greenhouse productions are always pretty stable and provide certainty to the customer. Greenhouse produce is less sensitive to weather than the open field cultivations in the South of Europe and North Africa. Although with the extreme heat we had this summer you saw that even in the greenhouse you can't steer everything. We've been out of production before with our 3.5 hectares of Sonsation in the greenhouse at Kreling Aardbeien in Nieuwaal. We want to do that better next year, because I see a potential successor for Elsanta in Sonsation. In any case, we follow all variety developments closely."

Room for growth
The expectation is that strawberries in winter will follow tomatoes, where there's an increasing amount of investment in lighting as well, and growers are now serious competition for southern growers. It is about large depth investments though, and about a very different acreage than in tomato. "For tomato, there's supermarkets in the Netherlands that only supply lighted product from the Netherlands," knows Boudewijn. "We're not quite there yet in strawberry, but I do see room for growth of the supply from the Netherlands in winter. It helps if the consumer will start choosing Dutch produce and wants to pay for it, even if import produce is cheaper. The taste of our strawberries will certainly not be the issue. It's very good."

And sustainability also plays a role. "All electricity, CO2 and heatcan be generated with our CHP, as we can use in the lighted greenhouse. We certainly tell that story in the chain. To the consumer that's a little more complicated. For them, the supermarkets play an important role. They ask for certifications like PlanetProof and know how best to deliver this sustainability message to the consumer.

For us it's the task to grow strawberries, as good and as sustainable possible. And, when it's quiet, with which I mean relatively quiet with three hundred men at work and little peaks, to think about new plans. In the long term that could certainly be new glass, although the choice for racks might be more logical now. We don't have specific plans at the moment."

This article was printed before in edition 12, volume 34 of Primeur. See www.agfprimeur.nl for this.