This year, Dutch Berries built a four-hectare full LED-lit greenhouse. This allows this major Dutch strawberry farming to bring large volumes of a brand new crop to market from Christmas onwards. By also growing more different varieties, year-round cultivation is almost a reality. There's no Dutch-grown product available for only a very short time. That's from mid-February to the beginning of March.

The development of new varieties and automation is being closely followed too. It's currently still challenging to harvest many strawberry varieties using robots. But, if these fruits grew more 'in line', Dutch Berries certainly considers harvesting robots a viable option.

At the beginning of December, the first fruits of this investment could, literally, be plucked. It was small quantities at first. But now, toward Christmas, yields already amount to one kg/m2, calculates Boudewijn van der Wal of Dutch Berries. "We have four hectares of full-LED lit cultivation in the new greenhouse."

"So, that means 40,000kg of strawberries per week. From now on, shoppers can find these strawberries on supermarket shelves in winter. And let's hope, if COVID-19 allows, the hospitality industry will also buy this premium product from wholesalers. They could include them in their dishes."

Dutch Berries started with its first 20 hectares of greenhouses in late 2018. At that time, there was no lighting, bar the red bulbs. These helped the plants to stretch upward. Also, not as many different varieties were grown. "We've learned a lot over the past two years," says Boudewijn. That was at the end of November. He was walking through the greenhouses, video calling.

Each greenhouse has a different variety
The uniform greenhouse production is also good for overall production. To ensure this, this year, Dutch Berries started to grow several varieties, one after the other. That's so there aren't two varieties in peak production, at the same time. "We're growing Elsanta in the greenhouse's first ten hectares. That's our main crop. It's a fairly traditional crop. It's season is from roughly September to mid-December. And then in April and May". The other ten-hectare block contains the Malling Centenary variety. "This is an earlier variety. It peaks as early as September." 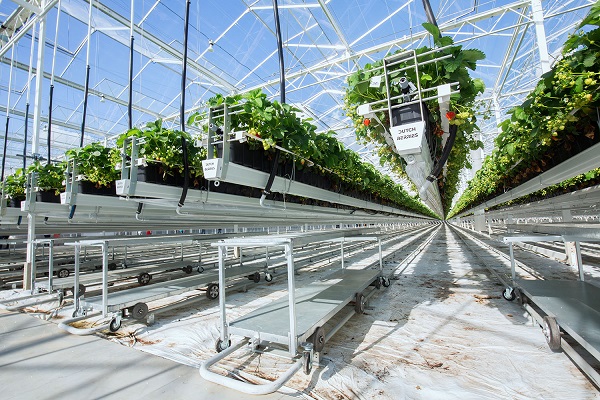 Strawberries in the gutters. There are gutters that can be raised and lowered in the pathways too. This doesn't only add a bit of extra production; they also even the climate out, which benefits the plants.

"About the greenhouse climate, for example. We've hung gutter in the pathways too. We decided to add these when we were placing gutters for the new greenhouse. The gutters can be raised and lowered. The advantage of this is not only additional production. The climate also becomes more moderate. That, too, benefits production," Van der Wal says.

There's, therefore, less overlap with Elsanta, which peaks in October. Together, this gives an even production pattern from mid-September to mid-October. After the winter, Malling Centenary then returns to production from early March to mid-May. There's even a third, smaller production round in June/July." And then there's the newest glasshouse. In it, the Sonata variety now has lights hanging over it. "This variety does well as an early winter crop. Production begins in December and runs to mid-February. In the summer, we grow Furore, as an ever-bearer, in this greenhouse," adds Boudewijn.

Fewer peaks
This is the first year Dutch Berries is cultivating this combination of varieties. They have, however, an entire layout in place. And it was quite a quick decision. "We looked at both summer rack cultivation and winter greenhouse cultivation. The first option is cheaper in terms of investment. It, however, provides production at a time when Dutch outdoor farming already provides excellent strawberries. That's different in winter. Then there are mainly imported products on the market."

"Now, we can offer premium local strawberries grown under lights. Clients were interested in this. It helps us retain a permanent group of employees because we are now almost continuously in production. Ultimately this means we can harvest for longer with fewer people. Since we work with several varieties, there are fewer peaks. So, we don't have to employ extra people for short peak periods," Boudewijn continues. 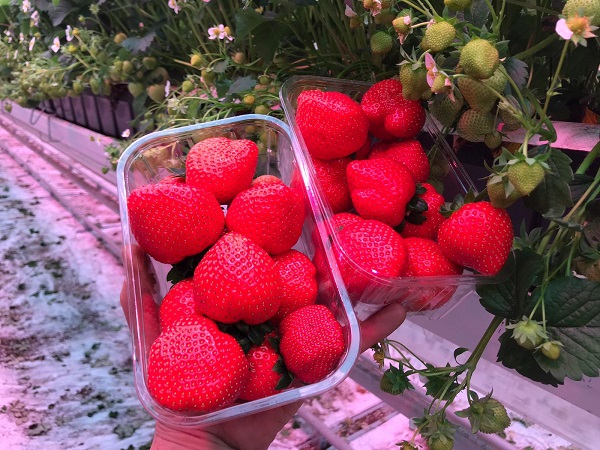 The first Sonata strawberries of 2020 under lights

For growers, when it comes to any new development, production forecasts are the most important factor. Clients want to know on how much they can count. "With this new plan, we entered the market along with Veiling Zaltbommel. That was the case when we started two years ago too. We sell our goods at auction. We don't do any direct sales. But, of course, we have direct contact with clients about, say, forecasts."

Certainty
People all over the world eat Dutch Berries strawberries. The Netherlands, Germany, Great Britain, Denmark, Norway, Sweden, and Japan as major markets. "They make gorgeous cakes with them," says Baudouin as he walks past a box of strawberries destined for Japan. "I'll send you pictures." Baudouin expects a significant amount of the lit cultivation to remain in the Netherlands. "It's a unique opportunity for supermarkets. They can get a premium Dutch product with a great flavor and high Brix level. But there's also serious interest from our export markets," explains Van der Wal.

"Greenhouse production is always fairly stable and therefore gives clients certainty. That plays a role too. After all, greenhouse products are less sensitive to the weather than outdoor crops in southern Europe and North Africa. However, as is evident with this summer's extreme heat, you can't control everything, even in the greenhouse. We stopped production at our 3,5-hectare Sonsation greenhouse at Kreling Strawberries early. We want to do better next year because I see Sonsation as a potential follow-up to the Elsanta. In any event, we're closely following all variety developments."

The Japanese love Dutch strawberries too

Room to grow
It's expected that, in the winter, strawberries will follow tomatoes' path. There, there's also been increasing investment in lighting. Dutch growers are now a serious competitor for growers in the south. But you need large, long-term investments. And strawberry farming is very different from that of tomatoes. "There are already supermarkets in the Netherlands that offer only local lit-cultivation tomatoes," says Boudewijn. "This isn't yet the case with strawberries. Although I certainly see room for growth in the supply of Dutch produce in the winter," says Boudewijn.

"It helps if shoppers also choose Dutch products and are willing to pay for them. Even if imported products are cheaper. The fault certainly doesn't lie with our strawberries' flavor. They taste great." Sustainability also plays a bit of a role. "We can use all the electricity, CO2, and heat our CHP generates in our lit greenhouse. Those in our chain definitely know that. It's just harder to convey that information to shoppers. Supermarkets,  in particular, have a vital role here. They want certifications like PlanetProof."

"But only they know how best to bring this message about sustainability to the consumer. For now, it is up to us to grow strawberries that are as good and sustainable as possible. And to come up with new ideas for when things are relatively quiet, with 300 employees and few peaks. That could certainly be new greenhouses in the long run. Although racks might be a better choice now. But, currently, we have no fixed plans," concludes Boudewijn.