The Department of Agriculture (DA), through the Agricultural Training Institute (ATI), has partnered with four barangays in Caloocan and Quezon cities for the establishment of “Greenhouse Village” in support to the urban agriculture initiative of the “Plant, Plant, Plant” Program.

Key ATI officials signed a memorandum of agreement (MOA) with representatives from barangays 179 and 180 in Caloocan, and Payatas and Tandang Sora in Quezon City which will serve as pilot areas for this undertaking. 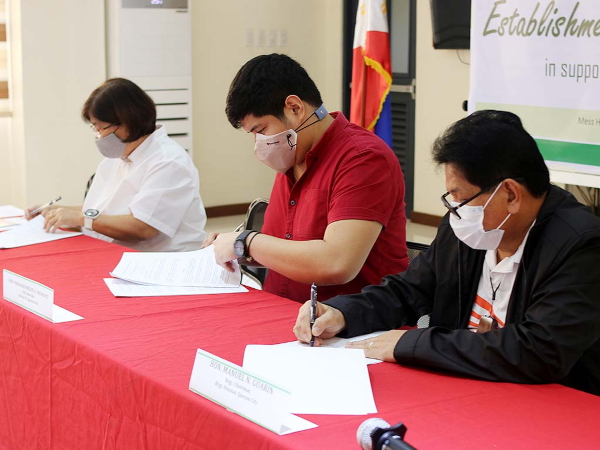 Under the partnership, the Institute will provide funding assistance for the establishment of a Greenhouse Village per barangay. This will feature one unit of high greenhouse with an administration office and storage area; one unit of seedling nursery with micro sprinkler irrigation; and one unit of production area with drip kit irrigation system. Ten sessions of training program from the construction phase until harvest time will also be covered by the ATI.

Through this undertaking, the DA and ATI aim to showcase doable technologies of protective farming system. Likewise, this is to increase the production of vegetables and to make these available in the barangay level throughout the year, amid varying weather conditions.

During the MOA signing, ATI Assistant Director Rosana Mula encouraged the barangay officials to promote urban agriculture technologies to their neighboring barangays. Engr. Renato Dela Cruz, chief of the ATI-Partnerships and Accreditation Division, also thanked the barangay officials for their participation in the project and looked forward to partnering with their respective communities to boost the promotion of urban agriculture.

The MOA signing for the establishment of the initial four greenhouse villages was held on December 15, 2020 at the ATI Mess Hall in Diliman, Quezon City.