"gaining experience for scaling and sales on hectare scale"

Algae grow fast, and in the case of spirulina, they're also rich in protein. This makes it an interesting product to grow with a view to the future. That's why, in the academic world, there's a lot of research into microalgae. More and more greenhouse growers are interested in algae production nowadays.

But: how do you do that well and on a large scale? In De Kwakel, in a separate compartment at ornamental grower Ruud Olij's greenhouse, there's been a large-scale grow since the beginning of November. In the greenhouse, different designs of photo bioreactors with lighting are used; real high-tech greenhouse horticulture. To realise this, algae experts, business builders and greenhouse horticulture technicians found each other in a collaboration, and now fusion, between LGem and Synalgae (a combination of Bosman Van Zaal and entrepreneurs). 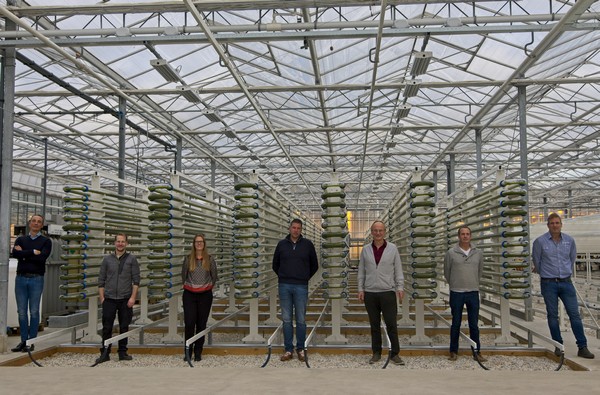 Practice oriented
LGem already has fifteen years of experience with the cultivation of algae, and in recent years was focused on the sales of algae reactors, which until a short while ago mainly happened at academic research facilities and R&D departments of multinationals. Since 2018, Synalgae got on the algae track as well, with, among others, grower Ruud Olij and Bosman Van Zaal. Synalgae's goal was to develop production technology and produce algae with that for the ingredient market. The long term goal for Synalgae was to have demand and supply in the micro algae biomass meet.

Jeroen de Vree, Head of Production and Algae Hub at LGem/Synalgae: "With the merger we joined decisiveness with knowledge. With these hypermodern facilities we want to let LGem/Synalgae have a flying start to show that the merger company can supply production facilities on hectare scale, all around the world, with the necessary support and in the future sales of the produced algae as well. Those projects have to become more turn-key as well, like they do in greenhouse horticulture."

But the market is already changing due to Covid-19, with the focus on plant proteins. "With this new HUB facility in De Kwakel, we help reach this changing point faster, so we immediately are there with a proven concept. By getting on board properly now we become pioneers and we can't miss the boat."

At the start of November, the champagne corks popped, because all three of the production scale photo bioreactors coupled to a fully automated up and downstream in De Kwakel were all in production. "Quite an achievement, because both parties hadn't built at this scale and this high tech before," says Jeroen. "We're now talking about 1200 square meters and 30 cubic meters of algae culture in all three photo bioreactors together. That's normal for greenhouse horticulture, but a very big step in algae cultivation, especially in the high-tech way we're doing it."

Business case for growers
In 2019 they started with drawing the plan for the demonstration facility, and in May of this year they started with the construction. Now that all installations are producing, harvest is starting. "On average, 15 kilos of dry matter each day of the year, but our end product is a paste, about 75 kilos per day," says Jeroen. In the demonstration facility about 22.5 tonnes of 'food grade' spirulina paste can be produced per year. Next to that, other tests are being done.

The results from De Kwakel serve as a realistic base for the calculation of business cases for different sorts of algae and products like that. For now, only data from the academical field is available, where algae are grown in a laboratory environment. Local growers have shown interest to run a test as well.

In the De Kwakel facility, customers can gather growing data, execute business case validation and product market development, and do tests with new types of algae. "Also, we learn together with the customer how to optimise algae production. There's a very limited amount of data available globally that was gathered on this scale." Next to that there's process parameters that influence the output of the photo bioreactors, knows Jeroen. "There's over 300,000 different kinds of micro algae and a lot of questions like: How long can they be lighted and with which spectrum, which growing temperature, what storage temperature do they need? A customer can test all that before they make a large investment." 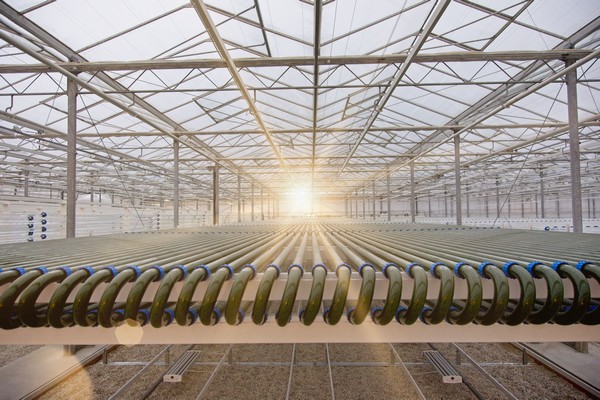 More, cleaner, better
The benefit of a closed growing system, a photo bioreactor, is that during the cultivation all process parameters can be set optimally, like with tomato cultivation. "That ensures high productions and a much cleaner product than many of the algae already on the market," knows Jeroen. "Many of the current products come from ponds in the open air, but they are not nearly as clean and certainly not manageable as well as these reactors."

Spirulina
There's 300,000 kinds of algae for growers to choose from, that's mainly determined by the choice of what the algae biomass is needed for and what contents are needed for that. Contents like fatty acids, anti oxidants, pigments, and many more, vary per type. In De Kwakel they chose spirulina. "A very nutritious, non-toxic blue-green algae, also known as superfood," says Jeroen.

Strong points of this kind of algae are the high percentage of protein (70%) and also, according to Jeroen, an 'interesting blue colour'. But, most of all, spirulina is allowed in the European Union as food, so easier to sell than algae that have not been allowed yet. To bring other kinds of algae to the market is a future goal, but this will be accelerated due to the increased focus on sustainability and plant proteins. 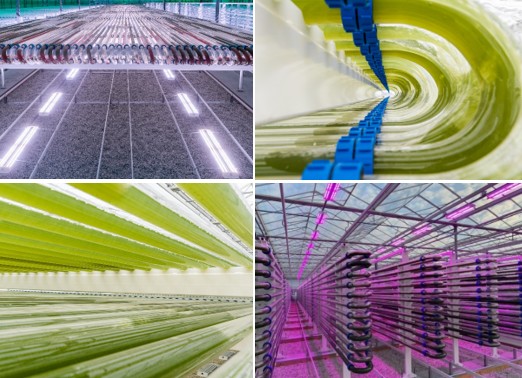 Lighting
The main goal isn't selling the biomass, by the way, but especially selling the systems, although both are connected. "By doing it on a large scale, we can show how it works and generate biomass for the market development." The existing systems are available for rent. "Phase 1 is now in action, in phase 2 two systems will be doubled, which expands the total production capacity from 30 m3 to 50 m3. On top of that there's 4000 square meters of room left in the greenhouse compartment, for an expansion phase 3 on the current location."

Curious people can go check it out in De Kwakel, on appointment.