When it comes to cultivation, viruses are nothing new. Two years ago, the Tomato Brown Rugose Fruit Virus (ToBRFV) broke out in the Dutch greenhouse horticultural sector. Growers struggle to control this member of the tobamovirus family.

For decades now, there's been ongoing research into disinfection methods to combat tobamoviruses. These viruses have been making life difficult for famers for a long time. There has been a technique that uses ultrasound against such viruses for years. And, according to Kees Luykx of Luykx Ultrasound, also against ToBRFV. "We now have a high-wattage ultrasound transmitter. It combats these tobamoviruses in drains and water supplies."

Kees sees that growers employ many disinfection methods against tobamoviruses. These include those that combat the Tomato Mosaic Virus (ToMV) and Tobacco Mosaic Virus (TMV). Many of these techniques have been scientifically researched. These studies were done to determine how effective such methods are against viruses such as these.

"A 2013 study considered various methods. It looked at not only acetic acid, hydrogen peroxide, hydrochloric acid, and sodium hypochlorite. But also dry heat, a hot water treatment, ozone, and UV disinfection," Kees says. "UV disinfection was shown to be one of the least effective treatments against Tobamoviruses. UV disinfection reduced pathogens by between 12 and 27%. That means 73 to 88% of the viruses present remained completely intact after UV treatment."

According to Kees, irradiating viruses through water would probably produce even worse results. That's important to note because ToBRFV is water transferable. That's why Luykx's focus is on combating the virus in drains and water supplies. "UV light moves with greater difficulty through water than air. That's because of the contaminants that are present in water."

"Practically, that means drainage water containing viruses, such as ToBRFV, will contain large quantities of viruses, even after UV decontamination. The farmer then reuses this water in the greenhouse. Then, I think it's a question of when the virus will strike, not if." 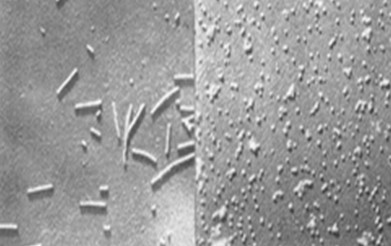 A view of the virus under an electron microscope. On the left, it's intact; on the right, post ultrasonic treatment, it's broken up into smaller pieces.

Ultrasonics is nothing new

Let's take another look at ultrasonic technology. This was also researched, even as early as 1951. Luykx explains that this showed that ultrasonic sound can break up (tobamo) viruses. It renders them entirely harmless. "The technique has been around for decades and is still as effective. The image (above) shows the TM virus, the Tobacco Mosaic Virus. It's been broken up and rendered harmless by ultrasound. You can see that on the right. On the left, before treatment, the virus is still intact."

Kees, himself, has already done a study using USAF. This is an ultrasonic technique he developed. With it, Kees combatted the PIAM virus (Plantago Asiatica Mosaic Virus) in lily cultivation. "USAF rendered this virus completely harmless."

Until now, ultrasound couldn't be used on a practical scale. "There weren't any sufficiently strong underwater transmitters. We've now built such a transmitter. It has a much higher wattage than the usual 100 Watts. This transmitter emitted a very powerful output. It fights tobamoviruses effectively in drainage and supply water. That allows you to rid the water of harmful viruses and also other pathogens, such as bacteria and fungi."

ToBRFV is very troublesome. According to Luykx, his ultrasonic technology breakthrough is, therefore, crucial. That's for tomato growers who are affected by this virus and its threat of infection. But this ultrasonic method can be employed against bacteria and fungi too.

"USAF can reduce the failure rate caused by crazy roots. So, growers get higher yields. That's thanks to a lower pathogen count in their supply water. Turnover increases, and there are fewer rejects. The USAF equipment can, therefore, pay for itself in no time. You could have a return on investment within a year," concludes Kees.