This week’s virtual town hall focused on precision nutrition. “This is a customizable approach to dietary management by providing tailored nutritional advice,” explains Max Teplitski, PMA’s Chief Science Officer, who led the panelists in the discussion. “While this has been more or less the approach of nutritionists for decades, the availability of advances in omics technology has allowed for a better understanding of the relationship between food and genetics, physiology, lifestyle and other factors. When this data is integrated and appropriately analyzed for individuals, it’s possible to manage or even present diseases and balance physical and emotional needs,” he adds.

This week’s panel was comprised of Jim Flatt, the Co-founder and CEO of Brightseed, Barbara Ruhs, a registered dietician and Nutrition Expert for Avocados From Mexico, and Roger Pepperl, Marketing Director for Stemilt Growers. 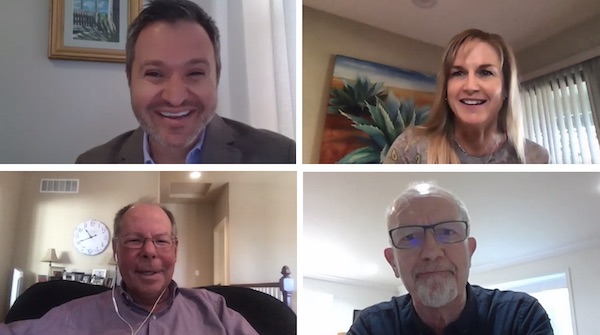 Targeting nutrition and flavor
At Brightseed, Flatt works with positive nutrition. He explains: “The food industry has long been focused on reducing the ‘bad’ in products, but a growing body of evidence actually shows the power and importance of positive nutrition, which means looking at the role of a plant’s phytonutrients and their health benefits. This positive approach has three times the effect of the approach of taking the ‘bad’ out. We work to understand what these phytonutrients are, where we can find them and what their role is in our health. This coming decade will be the time of phytonutrients and understanding plants on a molecular level.”

Outside of the genetic component, there are many other factors that influence a product’s nutrition density. “There are significant nutrition differences between crops with identical genetics which are grown in different geographical locations,” says Flatt. “Plants, just like humans, are products of their environment, and anything from farming practices, soil conditions, to climate conditions can affect the plant’s molecules that impact its taste and health conditions.”

Research is also being done on specific flavor components in produce and how these might be altered. The example discussed was cilantro, and how a small part of the population finds that it tastes like soap. “This is due to a genetic mutation in humans, and it turns out that a single mutation can actually affect the receptors which gives the individual the perception that the item tastes like soap” says Flatt. “Knowing this, we can target it and tweak the small molecules in cilantro that change our perception. Methods are increasingly being used on gene editing and molecular breeding to change some of these compounds in produce, and we can envision a future where we have tailored produce that speaks to subsectors of the population, like the 12% of people who find that cilantro tastes like soap.”

Stemilt Growers works to bring out nutrition messaging through recipes on their website. “We have recipes that are accessible, with specific health components that can be fun – like working with shapes, which kids love. We want to make it exciting for consumers to eat produce, so we try to make it less threatening and combine it with other meal experiences. And the recipes don’t include a lot of sugar – besides a few pie recipes which are, of course, essential for the holidays – so they work to retain the product’s numerous nutritional benefits,” Pepperl shares.

Genetically modified produce
When looking at how to increase the nutritional density of produce, the conversation inevitably circles around genetic modification. “Unfortunately, there is a lot of misconception from consumers surrounding this and GMO can be very scary to anybody who doesn’t have a science background. Bioengineering to create a fruit or vegetable that is pest resistant, has higher nutrients, or can even be grown in more sustainable ways shouldn’t be scary. So, it’s really important to recommunicate this to the consumers,” Ruhr says.

Stemilt Growers works with new apple varieties and each time a new apple is brought out the consumer’s mind goes to genetic modification, Pepperl shares. “All of our apples are non-GMO, and the amount of apple pairings out there today work to solve numerous issues, but we do get a lot of questions and concerns about this from retailers and consumers. It’s definitely not the majority of people that are concerned about it, it’s just a vocal minority, but it is a concern,” he says.

Flatt believes that the acceptance of genetically modified produce is growing. “At its beginnings, genetic modification was used to create amazing benefits for farmers, but the consumers didn’t see these benefits for themselves. Now that genetic modification is used to create better flavors, longer shelf-life, and more, the consumers are seeing the benefits for themselves and we’re seeing a greater acceptance from them. Highlighting these benefits will drive consumer adoption,” he concludes.

Next week’s virtual town hall will feature John Anderson, Chairman and CEO of the Oppenheimer Group, and Bruce Taylor, Chairman and CEO of Taylor Farms, who will be led by PMA CEO Cathy Burns in a conversation on their perspectives on 2020 and how they plan to seize new opportunities in 2021.