BioConsortia, Inc. was started in 2014 and has been working on the development of microbial solutions for natural plant trait enhancement and yield improvement since then. “It is our goal to develop a new generation of better products,” says Marcus Meadows-Smith, CEO with the company. “Our microbial solutions aim to reduce the chemical load as well as pesticide residues in fresh produce. We are an alternative to chemistry, but at the same time our products also complement the chemical range of products.”

Rotate chemistry and biological products
“Let’s take a vineyard as an example,” he continued. It is not uncommon for growers having to spray about six times during the growing season. Growers can’t use the same product every time they spray because they would likely encounter resistance and residue management issues, and as a result, they are already used to switching from one product to another. “Instead of using chemicals all these six times, our biological products can be added to the mix and used in rotation. Using both products three times during the growing season significantly reduces pesticide residues on produce and it’s more sustainable and better for the environment.” 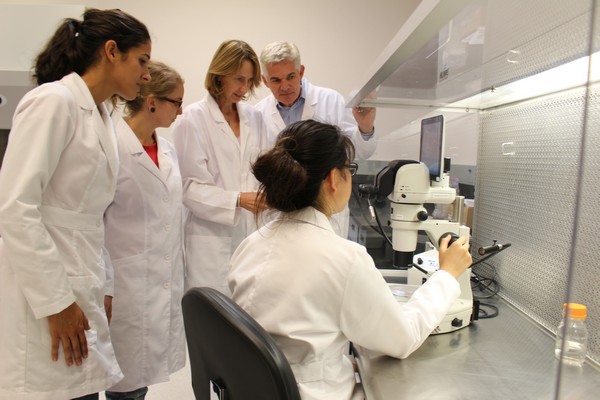 Better efficacy
According to BioConsortia, the products they have been working on over the past six years are a new generation of biological pesticides. “They have a better efficacy, higher consistency, and are easier to use than leading biological products on the market today,” shared Meadows-Smith. “The tests that we have done over the years show that our biofungicide products are always successful in preventing diseases from attacking the plants. In addition, their ease-of-use is demonstrated in the fact that they can be kept at regular room temperature with a shelf-life of about two years.”

The table below shows the effectiveness of BioConsortia’s products (row 1 through 4) compared to the leading biological fungicide on the market today.” The market leading product when used against fusarium, works well if diluted two or fourty times,” said Meadows-Smith. However, our products are still effective when diluted 300 times, this is a big difference in efficacy. It means growers don’t need as much product for it to still work well, resulting in lower costs.”

Strawberry trials
Over the past years, BioConsortia has been trialing its products on different crops. For strawberry trials specifically, the company has been rotating between the use of chemicals and biological fungicides. “We are seeing that rotation gives the best results as it leads to the lowest disease rating. In addition to disease control, rotation also resulted in higher yields,” commented Meadows-Smith. “Altogether, our biologicals provide greater crop yields, with lower environmental impact, and better profitability for growers.” Other produce varieties that have been tested with BioConsortia’s products include tomatoes, broccoli, corn, grapes, and cucumbers.

Crop Science Awards 2020
The company has been named a “Finalist” in the coveted Agrow Crop Science Awards 2020 in the category of “Best R & D Pipeline”. Over 100 entries were received for the 13 categories being run this year. Each application was scored by Agrow’s panel of 10 judges, enabling the Awards team to come up with the shortlist of “Finalists”.

Currently, BioConsortia has fungicide, nematicide and post-harvest disease protection products in the registration phase and the company is expecting to launch them by the end of 2022. In addition to developing biological pesticides, the team has a range of biostimulant products that are marketed just for yield increase properties and these have demonstrated average yield increases of 15 percent in fruit and vegetable crops. BioConsortia is headquartered in Davis, California and has a small team of scientists in Auckland, New Zealand.