Supplies of celery out of California are strong.

“There’s been a lot of celery around and certainly plenty enough for the holiday pull,” says John Chobanian of Ocean Mist based in Castroville, CA. “We’re going to be on the lighter side for the next two weeks and then we’re back to good numbers for winter planting.”
Celery supplies currently come out of Castroville and will until December 3rd. Then supplies transition to Coachella, CA and will do so until March 15th. After that, celery transitions back to Oxnard, CA and stays there until June 1. “We’re looking forward to a good winter program out of Coachella and the quality should be nice with supplies steady,” adds Chobanian.

California dominant
California is largely where North American celery supplies are mostly coming from. “Most of the local deals have wound down. There might be some product out of Florida but they got hit by some pretty awful weather too—hurricanes but mostly a lot of rain,” says Chobanian. 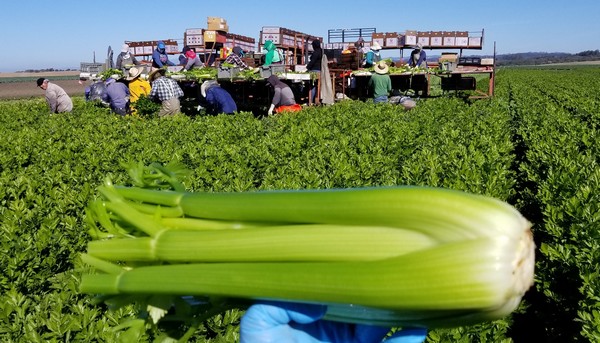 Meanwhile demand has been tricky to determine on a weekly basis. “The foodservice business took a big hit and they’re down considerably. Retail has been sporadic but good and that’s where we’re looking for most of our demand to come from at this point,” says Chobanian. As to what the ultimate Thanksgiving demand will look like also remains to be seen. “There could be more demand because people are going to celebrate Thanksgiving whether they do it with two people or 10,” says Chobanian. “It should increase demand overall. But this has never been seen before so we don’t know what’s going to happen. It’s all brand new to us.”

As for pricing, Chobanian notes it started off slightly stronger than normal. “Then it adjusted down to maybe where we’d normally be or slightly below that,” says Chobanian. “Demand overall didn’t amount to much at all once. But over time it did come in.”