This year, the UK imported less fruit and vegetables, especially in Q3

It was slightly less in the second quarter. And, by quarter three, imports were five percent down on 2019's Q3. Throughout the year, the monetary value of the UK's imports was higher than last year. Around the end of last year,  the pound rebounded somewhat against the euro. But, it then fell back to a level of more than €1.10 for one pound.

Just over half from the EU
For years, EU countries' share in total British imports has been just more than half. With 26%, Spain has the largest share, followed by the Netherlands with a 12% share. At 1.52 million tons, Spanish imports had a record year in 2019. These are expected to fall by four percent in 2020. But the 1.46 million tons is more than Spain's imports in 2017 and 2018. Particularly prominent products performed worse than last year. These are onions and tomatoes, both at -30% and mandarins at -15%. Other Spanish products did well this year, including peppers at +20%. 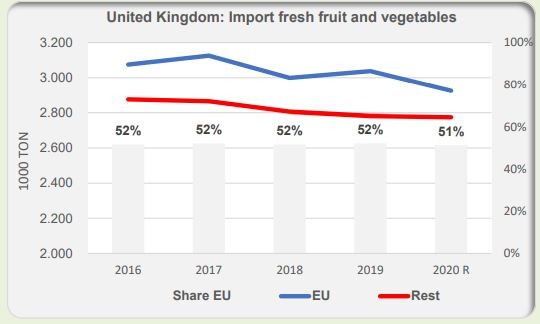 A little more from the Netherlands
It's expected that the UK will import about 685.000 tons of fresh produce from the Netherlands. That includes re-exports. That's slightly more than last year. But less than the previous three years. Since it includes re-exports, it's difficult to estimate this volume's scope. In 2019, roughly 200,000 tons of the total 670,000 tons were re-exported products.

Tomatoes are the most important Dutch product being sent to the United Kingdom. Bell peppers, onions, and cucumbers follow. The Netherlands also sends lots of pears to the UK. That country sent fewer in 2019, and that trend continued this year. Total British pear imports are gradually declining. Pear imports from Belgium, however, remained at the same level. More pears are being imported from countries like South Africa, Morocco, and Brazil. Although it experienced a dip in 2019, you can include Peru here. 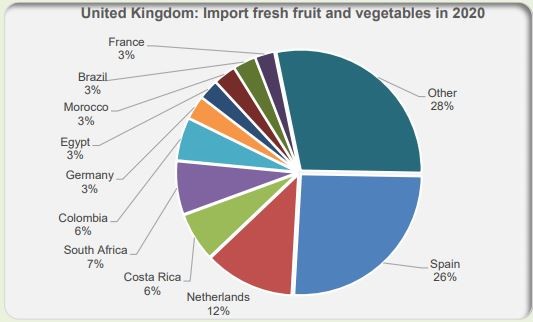 A lot less Spanish tomatoes, far more from Morocco
Bananas are, by far, the most important British import product. They import no less than a million tons annually. This year's imports have been somewhat lower than last year. At a distance, tomatoes are the second most important import product. In recent years, they amounted to approximately 390,000 tons. Until September 2020, the UK imported eight percent fewer tomatoes. From or via the Netherlands, it was ten percent less. With 30% less, Spain had an even more significant drop. Morocco was the biggest grower with as much as a 25% increase.

More and more bell peppers imported
Bell peppers are a growth product. In the first nine months of this year, its import figures grew by double digits again. with a 20% increase, Spanish bell peppers are performing well. But more is also being imported from or via the Netherlands. Cucumber imports were two percent up on the 2019 record. Annually, Spain is the largest exporter. Spanish cucumbers did well again this year. Until September, that country sent seven percent more of these to the UK. Aubergine exports are increasing too. And the Spanish product did particularly well this year.

The Netherland - a stable onion supplier
In 2019, onions were the third most important import product in terms of volume. It follows bananas and tomatoes. For the entire year, the UK imported a record 360,000 tons from the Netherlands. That's compared to the previous three years' 260,000 tons. The heat made for a smaller 2018 harvest. So, there was a huge demand for imported onions.

Especially at the end of the 2018/2019 season. At that time, there was insufficient Dutch product to fill that gap. That's why the Brits imported more from particularly Spain, Egypt, and New Zealand. This year, imports from those countries declined to their previous levels again. Dutch onions imports remained on par. 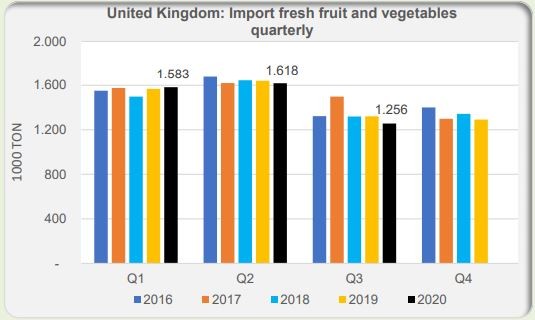 Fewer and fewer imported pears and mushrooms
Mushroom imports from the UK fell even further this year. It's ten percent less than 2019 of primarily Irish and Polish imports. Dutch mushroom imports have fallen to below 10,000 tons. The United Kingdom is also importing fewer and fewer pears. In 2019, that amounted to 110,000 tons. In 2016, that was still 150,000 tons. This year, that dropped by five percent more. Imports from the Netherlands, in particular, plummeted by 20%. But, the UK imported more Belgian pears.