Researchers from the Disruptive & Sustainable Technologies for Agricultural Precision (DiSTAP) Interdisciplinary Research Group (IRG) of Singapore-MIT Alliance for Research and Technology (SMART), MIT’s research enterprise in Singapore and Temasek Life Sciences Laboratory (TLL) have discovered a way to use Raman spectroscopy for early detection of shade avoidance syndrome (SAS) in plants. The discovery can help farmers with timely intervention against SAS, leading to better plant health and crop yield.

SAS is an adaptive response and an irreversible phenomenon, where plants reach for more light to overcome shaded conditions. It is commonly seen in plants experiencing vegetative shade which is detrimental to plant health, as it leads to a number of issues including hindrance of leaf development, early flowering and weakening of the plant’s structure and immune system.

Thus, early detection of SAS is key for sustainable agriculture and improved crop yield. However, existing methods for detection of SAS in plants are restricted to observing structural changes, making it difficult to detect SAS early.

In a paper titled “Rapid metabolite response in leaf blade and petiole as a marker for shade avoidance syndrome” published in the prestigious journal Plant Methods, SMART DiSTAP and TLL scientists explain their new way of detecting SAS early on, allowing farmers to intervene in time to prevent the irreversible effects of SAS. The team built a tabletop Raman spectroscopy instrument that allows measurement of carotenoid levels in plants, which can indicate whether a plant has SAS.

“Our experiments with Raman spectroscopy detected a decrease in the carotenoid contents of plants that have SAS,” said Dr. Gajendra Pratap Singh, co-first author of the paper and Scientific Director and Principal Investigator at DiSTAP. “While plants with longer exposure to shade developed more severe SAS, these morphological changes were only seen after one to three days. However, changes in the carotenoid peak intensities were detected much earlier, from just four hours of shade treatment.” 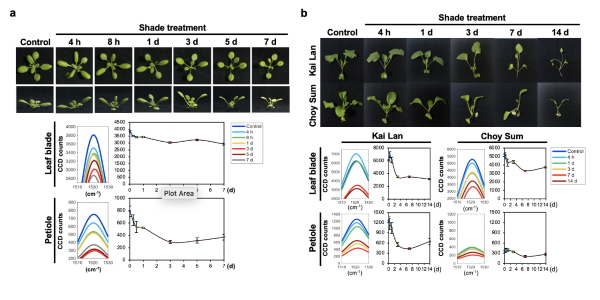 Using Raman spectroscopy, the scientists are able to non-destructively measure carotenoid content in the plant leaves, and have discovered its correlation to the severity of SAS and as a peak biomarker for early diagnosis. This cuts down the time taken to detect SAS from days to a matter of hours. The method can also be used to detect SAS in plants due to high-density planting and can be particularly useful to improve urban farming practices.

“We conducted our experiments on a number of edible plants, including frequently consumed Asian vegetables like Kai Lan and Choy Sum,” said Mr. Benny Jian Rong Sng, the paper’s co-first author and PhD student from Dr. In-Cheol Jang’s group at TLL and Department of Biological Sciences, National University of Singapore. “Our results showed that Raman spectroscopy can be used to detect SAS, induced by shade as well as high-density planting. Regardless of the food crop, this technology can be applied to improve agriculture and to meet the nutritional demands of today’s growing populations.”

The research was supported by the National Research Foundation (NRF) Singapore under its Campus for Research Excellence And Technological Enterprise (CREATE) programme.