The Australian smart building materials company ClearVue Technologies Limited has begun construction on a clear solar glass greenhouse at Murdoch University south of Perth. It's the first commercial-scale technology demonstration using the ClearVue technology in a protected cropping agriculture setting. The main construction is to be completed by December with finishing and commissioning in early 2021.The Murdoch University will conduct trials in the greenhouse.

ClearVue’s glass technology incorporates Solar PV cells around the edges of an Insulated Glass Unit (IGU) used in windows, whilst the lamination interlayer between the glass in the IGU incorporates ClearVue’s patented proprietary nano and micro particles, as well as its spectrally selective coating on the rear external surface of the IGU.

Greenhouse tests
The ClearVue greenhouse design replicates the format of the immediately adjacent PC1 greenhouse and comprises four glazed sections and an enclosed preparation room at the rear that is not glazed. The four sections within the greenhouse include one first section which is using normal glazing as a control for the CRC-P funded experiment to measure the performance of the ClearVue glazing against traditionally glazed greenhousing - both the expected reduced energy load due to the efficiency performance of the ClearVue product, as well as the power generation performance as an offset to the energy demands of the greenhouse.

In addition to this performance testing, and following construction of the ClearVue greenhouse, ClearVue will then engage with Murdoch University’s Professor Chengdao Li PhD and his team under a collaborative research agreement. Professor Li is a world leading molecular geneticist and Director of the Western Barley Genetics Alliance.

Prof. Li will design, test and conduct suitable plant science trials in the ClearVue greenhouse with a control trial in the control section of the greenhouse. The purpose of this testing will be to evaluate the effectiveness of the ClearVue glazing for use in plant growth which the company expects will be better than traditional glazing and other greenhousing materials due the highly controlled environment that will be created in the greenhouse by using the ClearVue product. The Company expects to see first results from the trials in mid-2021.

ClearVue expects that major construction works will be completed by the end of the 2020 calendar year with finalisation of works and then commissioning of the greenhouse to be undertaken during January and February of 2021.

The performance testing will commence from commissioning, and the Plant science trials to be conducted in the greenhouse are expected are to start as soon as possible thereafter but subject to alignment with growing seasons and cycles. At this stage, a winter crop cycle trial is planned to commence in or around March or April of 2021. 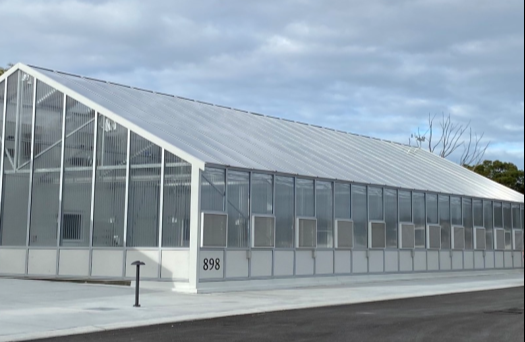 Market awareness
Commenting on the progress with the ClearVue greenhouse at Murdoch, ClearVue Chief Executive Officer Ken Jagger has said: “The commencement of construction of the ClearVue greenhouse at Murdoch University is a major milestone for us. We expect the constructed greenhouse to lead to greater market awareness of our technology and product globally with a key focus of the company on key territories in Europe where protected cropping agriculture is a key part of a secure food supply chain such as in Spain, the Netherlands and Israel. The constructed Greenhouse together with the results from the Murdoch University studies will provide a strong lead into a potentially lucrative opportunity to further monetize ClearVue’s technology and products. We look forward to updating the market as the project progresses.”

Research greenhouses
The ClearVue greenhouse is being built pursuant to its AUD$1.6m CRC-P grant at Murdoch University’s South Street Campus in Perth, Western Australia, in an area established by Murdoch University for installation of a number of other greenhouses as part of a new agricultural research activities precinct.

An agreement for lease has been signed with Murdoch for access to the land upon which the greenhouse is currently being built. The ClearVue Greenhouse is being built immediately next to two other recently completed polycarbonate ‘PC1’  and ‘PC2’ type research greenhouses built within the University’s new agricultural precinct. The precinct is being established by Murdoch in conjunction with third parties such as Curtin University, the Grains Research and Development Corporation and the Western Australian Agriculture Authority.