Usually, there is no activity in the warehouse of Belgium tomato grower VW Maxburg during the night. Or at least you won't find any people or tomatoes in the processing hall. However, twice a night you can hear a slight buzzing, and fog is dispersed from fans above the hall. This fog is stabilized hydrogen peroxide (diluted with water), ensuring that all surfaces in the hall are disinfected. The system is designed to reduce post-harvest product loss and prevent cross-contamination. 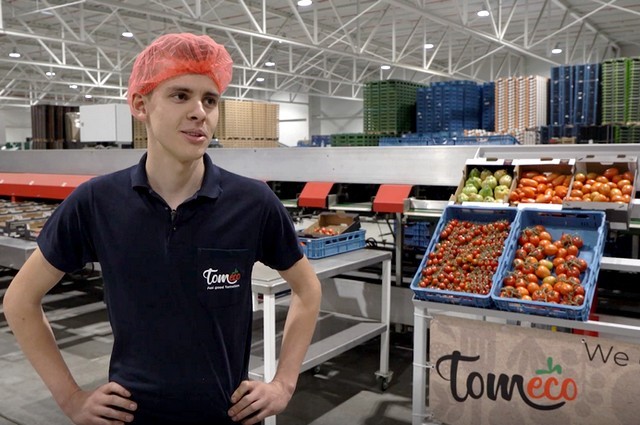 "Within the Tomeco group, we grow San Marzano, Coeur de Boeuf, and plum tomatoes, among others. Beautiful products, but also sensitive products, which can be infected by micro-organisms (like fungi) very easily post-harvest. Because the tomatoes are stored between 14 and 16 degrees Celsius, so as not to affect the taste, the quality can deteriorate rapidly because ofa fungus and that's what you want to prevent. Our research showed that there was an especially high risk of fungus in the packing hall," says Mitch Vermeiren, He’s responsible for tomato nurseries VW Maxburg and Meer Fresh Products, with a total area of 23.6 hectares, both located in Meer in Belgium and both members of Tomeco. He brought the matter to the MJ-Tech team, who at the time were in the process of installing a high-pressure fog system in the greenhouses of VW Maxburg. As a test, they decided to install a similar system in the warehouse of VW Maxburg, where instead of water a solution of stabilized hydrogen peroxide wouldbe dispersed. After reacting, this solution completely breaks down as oxygen and water, but not before disinfecting the surfaces with which it comes into contact.

"The installation has been tested since last summer and is fully operational this year. We can already see that the return on investment period is not long, only a few months.If you can prevent some complaints and returns, this is achieved very quickly", says Jurnjan van de Bremer of MJ-Tech. "And from a broader perspective, it's also good that weprevent food going to waste."

“There is no residue, and yet, all surfaces in the hall are not only fungus free, but also free of viruses and bacteria after treatment. That is an additional advantage in these times." 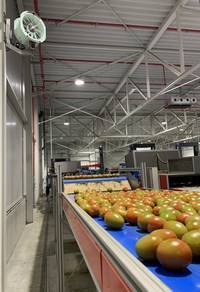 MJ Tech has over 30 years of experience with various applications (the high-pressure fogging systems that are normally used to control the greenhouse climate, but also mobile units for pesticides), and the components of this installation are developed for this specific purpose. The nozzles in which the fog is formed are adapted to the ideal droplet size and the rotary fans ensure that the fog is dispersed up to 30 meters. “We can calculate the optimal distribution for each warehouse, processing station or packing station according to the surface/volume. The installation is set up in such a way that fogging automatically occurs according to the desired schedule", Jurnjan shows. As with the other installations of MJ-Tech, this device is also accessible via the cloud and can be operated and maintained remotely. A solution that is relevant for vegetables with a relatively high storage temperature, such as tomatoes, but also cucumbers, courgettes, eggplants, or bell peppers, because immunity to viruses seems to be an illusion.

Mitch tells us that the system at VW Maxburg runs twice for an hour every night, with a rest period of 2.5 hours in between. “This way, we can be sure that we start with a clean hall every day.” As a disinfectant, they use the silver stabilized hydrogen peroxide Huwa-San TR-50 of Roam Technology, which is widely used in horticulture to keep pipes free of biofilm. Huwa-San TR-50 is fully authorized for this specific application in Belgium.

Infallible
"Previously we regularly cleaned the hall with a manual mobile fogger, but that took more time and work, and the results weren’t perfect. Now we are sure that disinfection takes place the same way every night. The machine runs autonomously,” Mitch says. Although hydrogen peroxide is not harmful to tomatoes, there should not be any tomatoes in the hall during treatment. "That required an adjustment on our part, but it's definitely worth it.” In fact, they are so satisfied with the fogging of the stabilized hydrogen peroxide that they will also use it to treat the greenhouse this year. During crop rotation, the fogging system will be used to disperse Huwa-San in the greenhouses. “An extra security measure, and an extra way to get as many tomatoes as possible on the consumer's plate.”