Roy Persoon (32) joined the company of his father three years ago, after having worked for four years with Rijk Zwaan as logistics specialist and production specialist, where he also participated in the strategic team for bell pepper and eggplant. "We made plans for the coming five years, what to focus on and which segments to develop."

Doing business is in Persoon's blood. "Two years ago, I entered into a cooperation with former bell pepper grower Maikel van den Berg. Together, we founded MR Seeds, for breeding of seeds. Mike is focused on the cultivation, I am responsible for personnel and organisation. I have really seen that cooperation takes you further. That is why Personal Vision has joined Growers United." 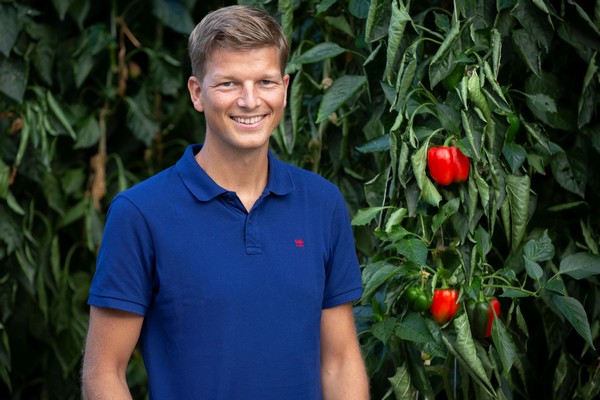 Shared vision
The MT of Personal Vision now consists of Roy, his younger brother Nick and his father. In the 7-hectare greenhouse at the Wilgenlei in Bleiswijk, they grow (unlighted) bell peppers - red and green - and were responsible for their own sales up to now. That is going to change.

Starting this season, the bell peppers are sold by the bell pepper sales team of Growers United. "We have joined a club of entrepreneurs with the same vision, entrepreneurs who distinguish themselves on the English market, just like we do, with a smaller size bell pepper, which is also suited for the Japanese market. Challenging clients, special packaging, that appeals to us. We expect to develop further with Growers United. Do what you are good at, that is what it is about."

Marketing and sales
Familiar people, with the same market vision and culture. But are there also business arguments to join Growers United? Persoon: "We are joining a cooperation with stocks, which is also GMO-recognized. The marketing and sales is done by Growers United. Through the sales advice commission, we stay up to date of the market developments. Of course, we try to learn from each other to keep servicing clients in a smart way."

Persoon also sees other advantages. "By collectively purchasing boxes, you can do it more efficiently. With 7 hectares, we are not equipped to flowpack ourselves, or organize the export to England. Growers United has much more expertise in that area. The financial picture has to be good, but it is very important to have confidence in the cooperation."

Putting the customer central
Roy Persoon is the prototype of a young, enthusiastic entrepreneur, who is most welcome at Growers United, according to bell pepper grower Arnaud van Dijk (39) of VD Holland, member of Growers United since 2014 and active in the product group bell pepper. The other members - Janssen Paprika and Barendse - form, together with Van Dijk, a close knit group of bell-pepper specialists, but because of the sale of Barendse to Agro Care, there was room for a new player.

Personal Vision was that player, until this season a free grower with sales on the British market. "That is the good thing, they have done their own sales for a long time. What you see is that they have also taken this into account when selecting varieties. They have made the transition from what the customer wants to what does that require from me."

'Naming & shaming'
The growers of PapriCo are focused on the various markets, including the Dutch market. The growers distinguish themselves by serving the higher segment of English retail and also produce for the Japanese market. That requires a certain type of entrepreneur. Van Dijk: "We are of the opinion that we can add value to the bell pepper segment with a small group of growers, because we all see the importance to perform the best we can. In a larger collective, it is easier to hide. Our product must be good every day."

The growers operate as a close knit team, who know what is involved in sales. Van Dijk: "It requires an increased awareness of quality. Because we get direct feedback from our customers through the sales team, we can better anticipate. The lines are very short. We practice 'naming & shaming'. We track everyone's supply reliability. At the end of the year, a prize is awarded, during a playful evening, to the best cultivation company. We have won it sometimes, but often not."

Fixed contracts
Van Dijk is critical of aspiring members: "We will always have a close inspection: what does the other have to offer, and what do we have to offer. Roy Persoon sees the sense in that. You have to fit in the team and at least be prepared to serve the upper segment of the market, and act upon it. Take packaging for example. That requires good people. Sometimes, you have to change casks up to five or six times per day. If I compare this to before, at a large cooperation, you had many growers producing bulk. We are trying to distinguish ourselves with many different kinds of packaging, but that also means we have taken on a lot. You have to like that."

In the coming years, Van Dijk expects further growth in the bell pepper acreage, which is now 67 hectares. "Both Jansen and us have invested quite a lot in expansion in recent years. That was possible because the yields have been good. I think it is a very good sign that we have more security because we have fixed contracts. In years with good pricing, it can limit the price, but you do have financial certainty, on which investment plans can be built. Growers United only has one interest, and that is the interest of growers. We are in daily contact with the sales team of PapriCo. I believe that also adds value."